For our latest mission an ice skater stranded alone on the rink transformed from a novice into an expert in New York’s Bryant Park. The project was a collaboration with Ice Theatre of New York. Enjoy the video above first, and then check out the photos and report below. 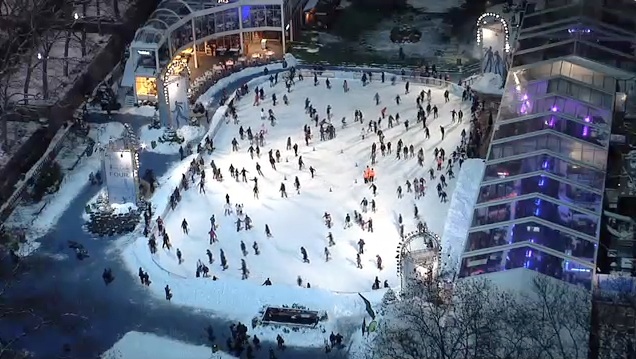 Every winter Bryant Park transforms its lawn into a ice skating rink. Earlier this year, Agents Adams and Sokoler were hanging out in the park when they witnessed a very funny moment. Every couple of hours the skaters are required to exit the rink so that the zamboni can clean the ice. While this was happening one man, a very poor skater, was stranded on the ice by himself, continually falling. This drew a large crowd of people gawking at his struggle. Agent Adams and Sokoler got an idea: what if we put a professional skater in this position and had him suddenly transform from a novice to an expert?

I met with Ethan Lercher from Bryant Park to discuss the idea. Ethan had helped facilitate our Mp3 Experiment in the park last year. He recommended I check out Ice Theatre of New York to find a skater, and directed me to a YouTube video of skater Kenny Moir doing a performance that seemed like exactly what I was looking for. When I saw the video, I couldn’t believe it. If we could get Moir to do this as an undercover performance in Bryant Park it would be perfect. 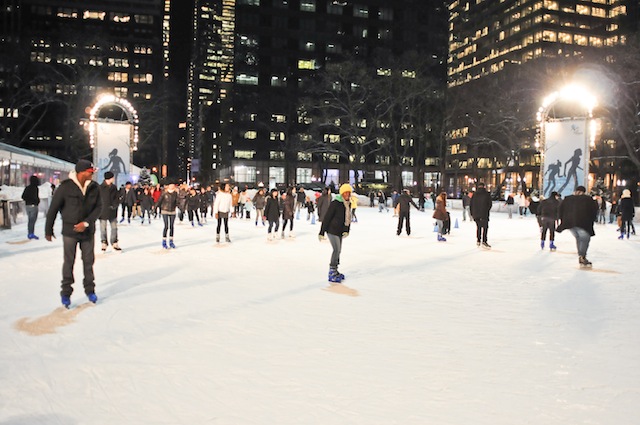 Agent Moir has nearly 50 years experience as a figure skater, having started at the age of 3. A native of British Columbia, Kenny competed in 9 Canadian Championships, resulting in a silver medal and several appearances at international competitions. He is currently the Executive Director of Figure Skating at New York’s Sky Rink. It was great to have such an experienced professional on board for the mission. 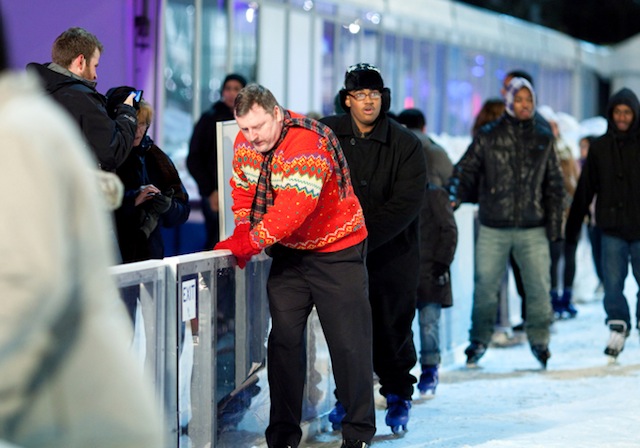 About five minutes before the zamboni cleaning was set to begin, Agent Moir entered the rink and blended in with the rest of the skaters. His bright red sweater and scarf made him stand out as he clumsily held onto the railing. 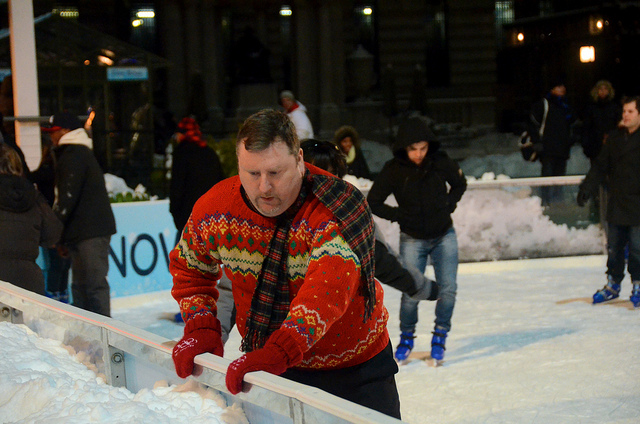 Agent Shoffman made the normal PA announcement to the crowd indicating that it was time for a zamboni cleaning and that all skaters should leave the rink. 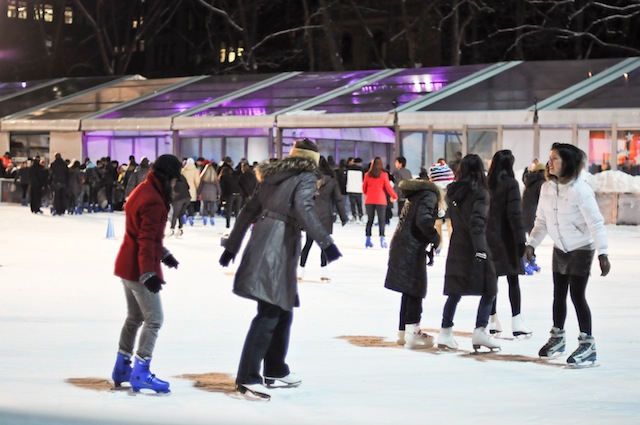 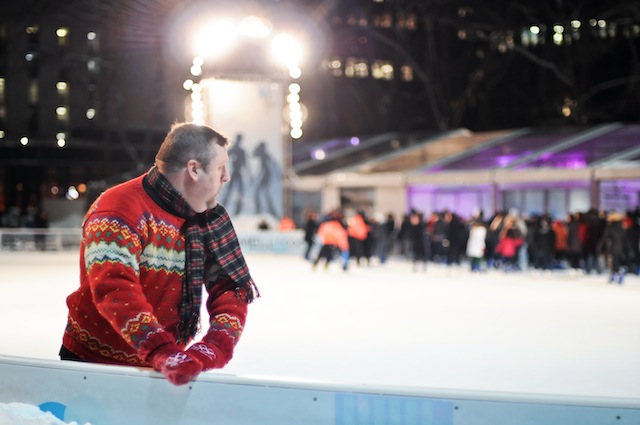 Within a couple of minutes, Agent Moir was left completely alone on the opposite side of the rink. 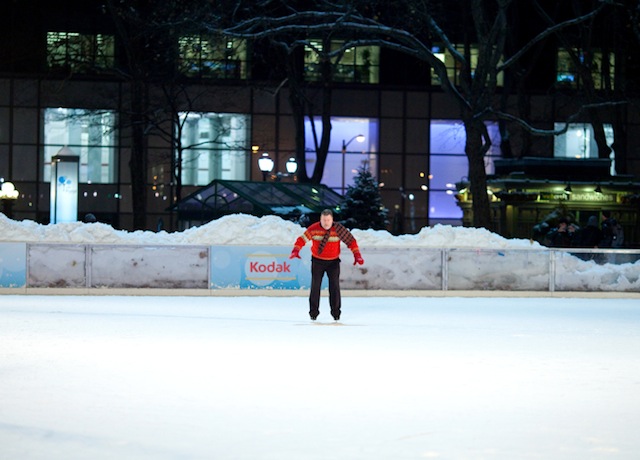 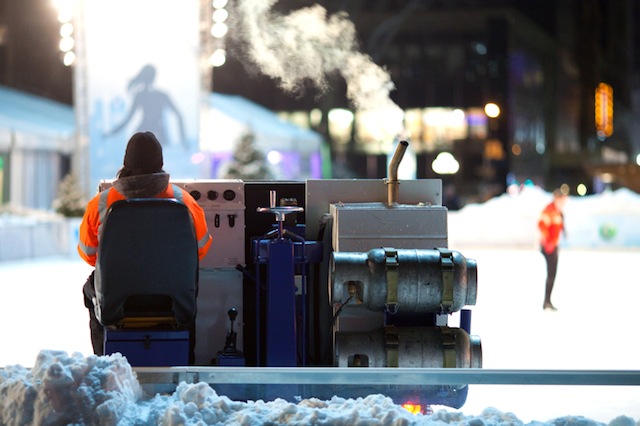 As the zamboni entered the rink, Agent Shoffman got on the PA again and this time personally addressed Agent Moir, “Sir in the red sweater, you need to exit the ice.” 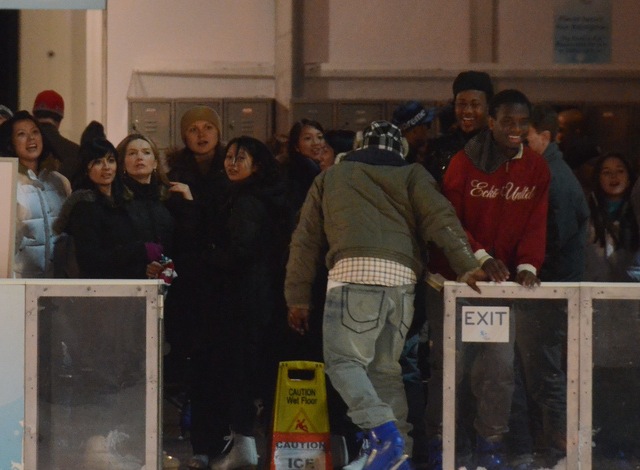 The crowd started to notice the poor guy stuck in the middle of the rink. 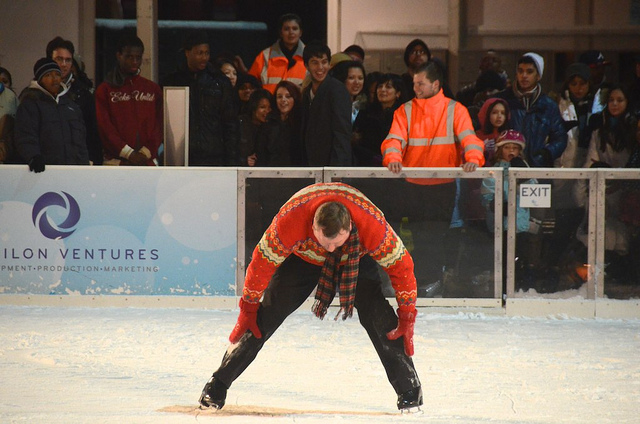 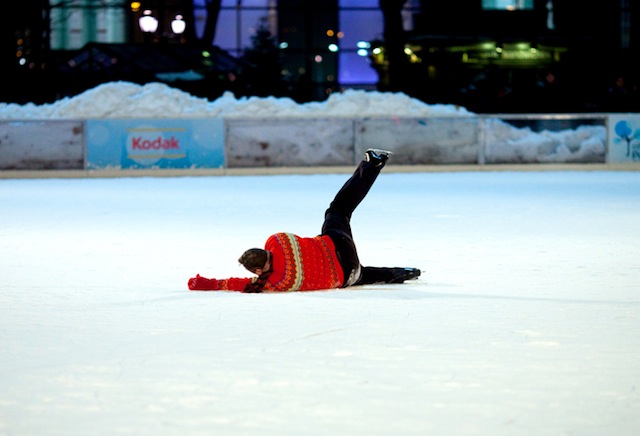 At this point, Agent Moir fell to the ground, creating even more of a spectacle. 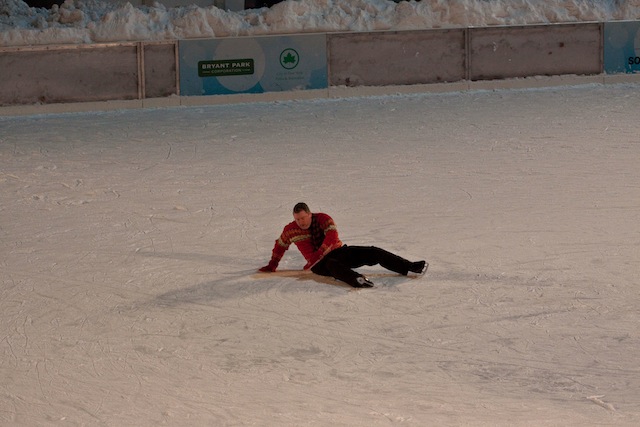 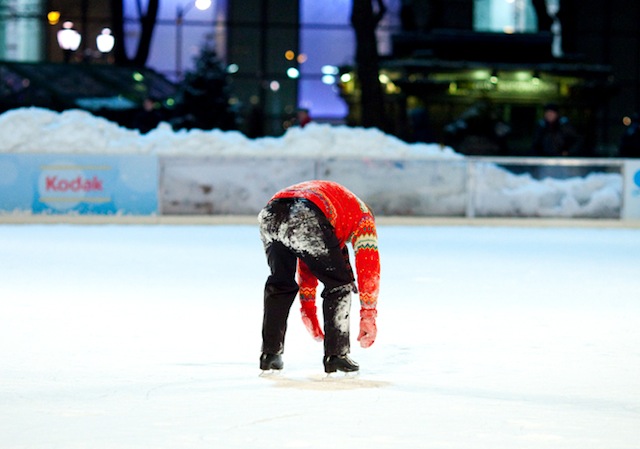 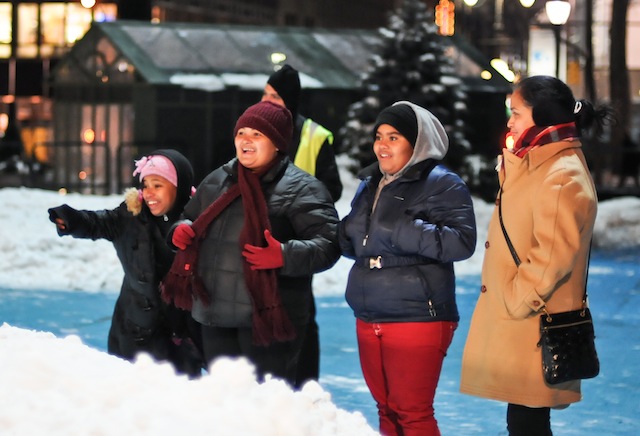 We had classical music playing on the PA system throughout all this, and at this point the song subtly switched to the Mozart piece for Agent Moir’s routine. Over the course of five minutes he slowly transformed from a novice to an expert. 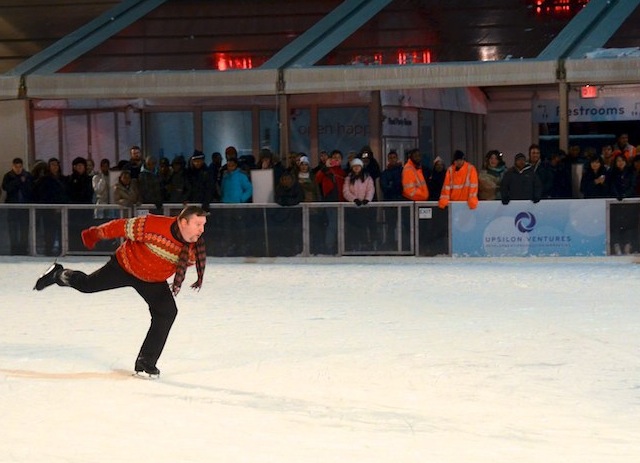 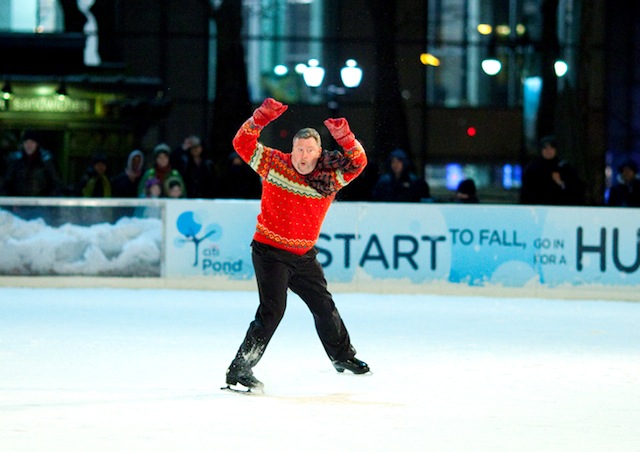 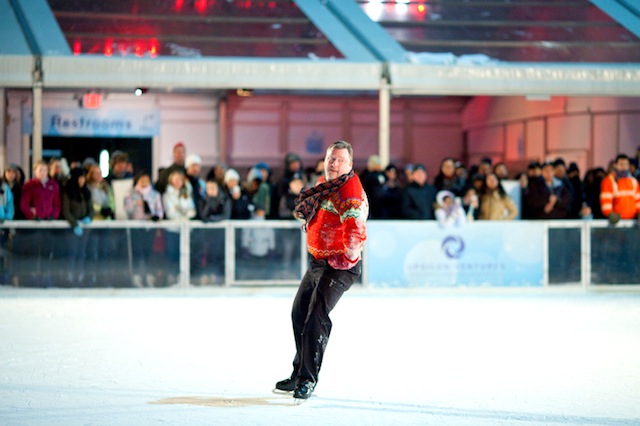 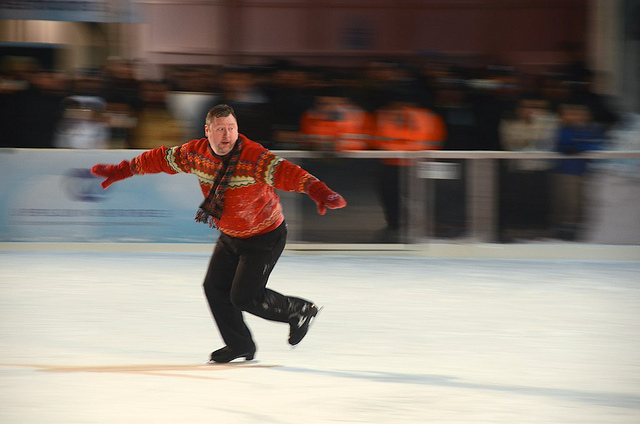 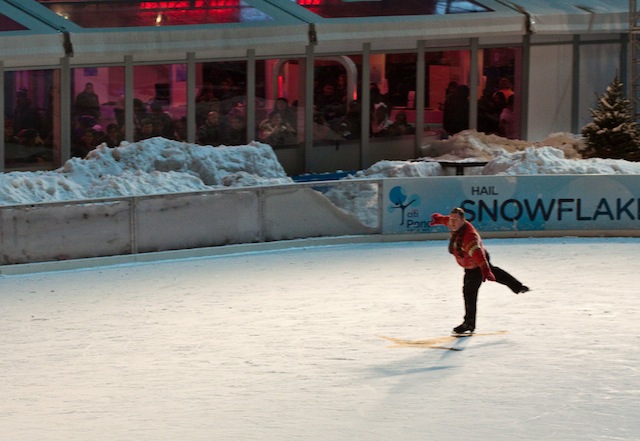 It was a blast watching the crowd realize what was going on as Agent Moir started doing more and more advanced moves. There was a huge crowd of skaters watching by the entrance, and even more inside the locker room area looking out the windows. 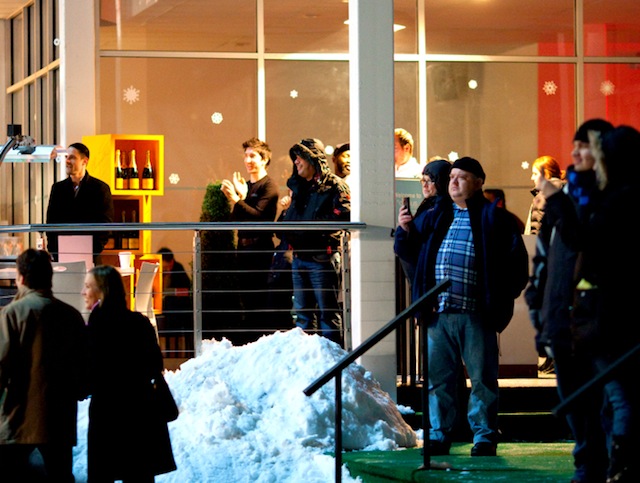 Agent Moir’s performance also attracted a crowd of onlookers in the two-story restaurant adjacent to the rink. 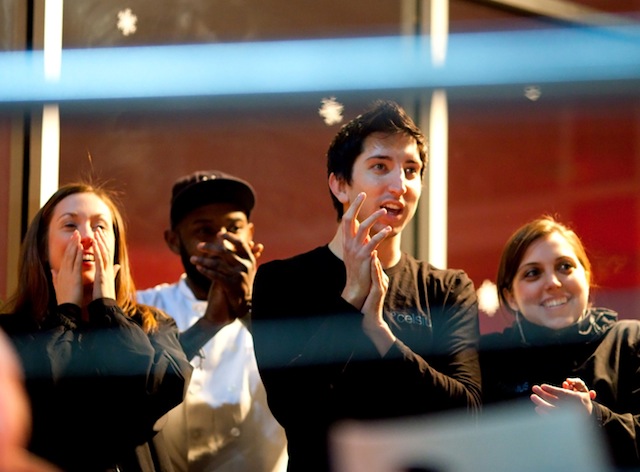 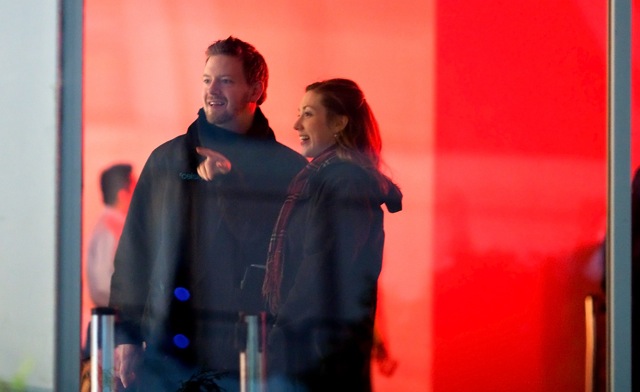 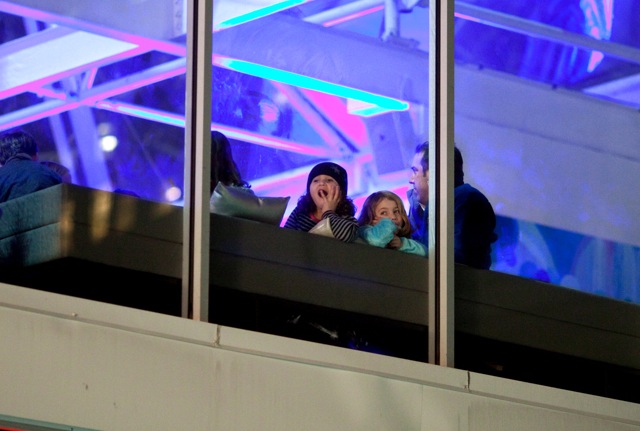 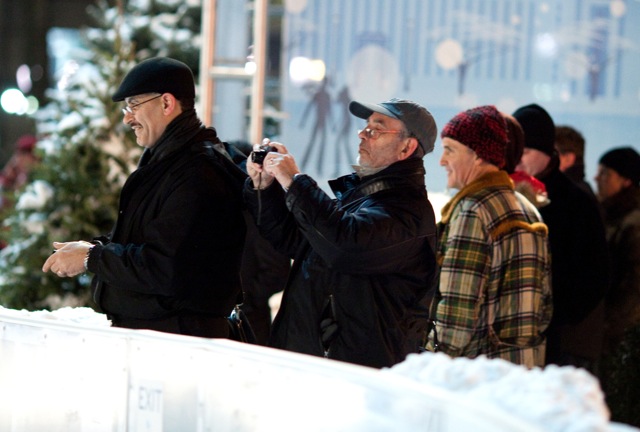 Other onlookers pressed up against the mounds of snow on the outside of the rink for a closer look. 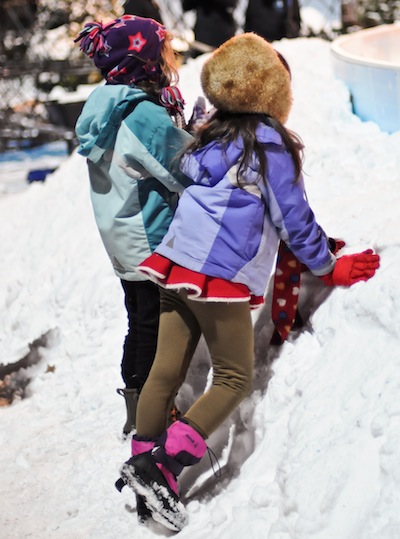 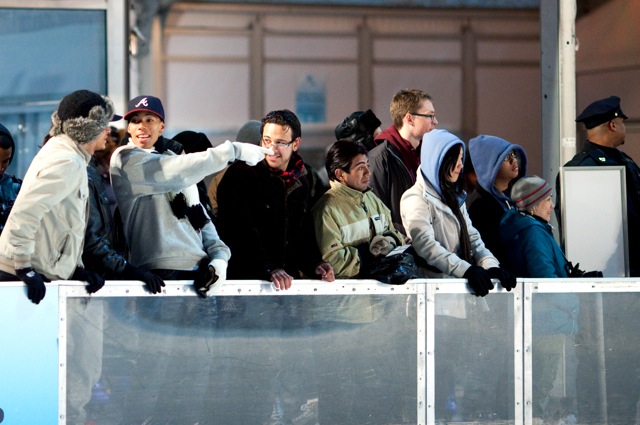 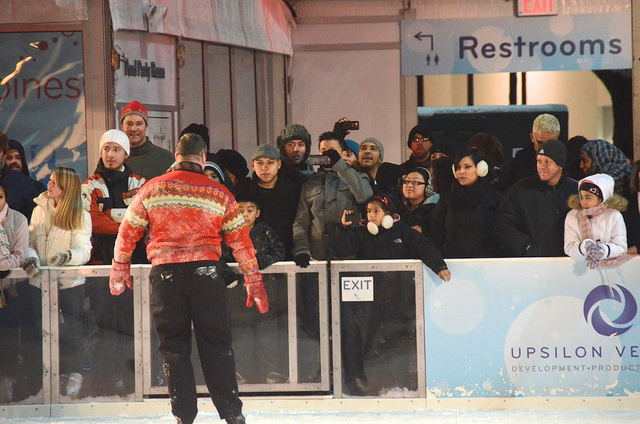 When the piece finished, Agent Moir nonchalantly skated towards the exit to the applause of the crowd. He took off his skates and left the area as if nothing strange had happened.

– See the full performance of “In a Nutshell” on Ice Theatre’s YouTube channel.