On Sunday, January 9th, 2011 over 5,000 people took off their pants on subways in 48 cities in 22 countries around the world. In New York, our 10th Annual No Pants Subway Ride had over 3,500 participants, spread out over six meeting points and ten subway lines. Enjoy the video first and then go behind the scenes with our mission report and photos. 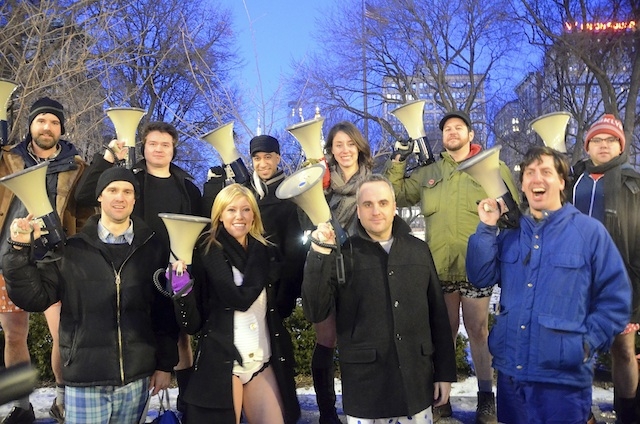 If you’re unfamiliar with No Pants, you might want to first read our history of The No Pants Subway Ride. 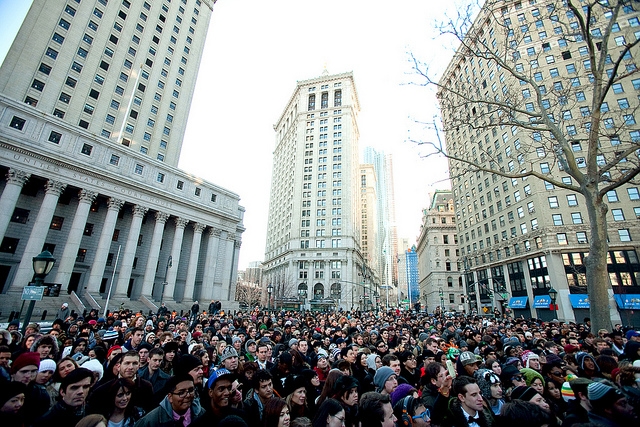 The crowd at Foley Square
Like last year we had six meeting points around NYC– two in Manhattan, two in Brooklyn, and two in Queens. 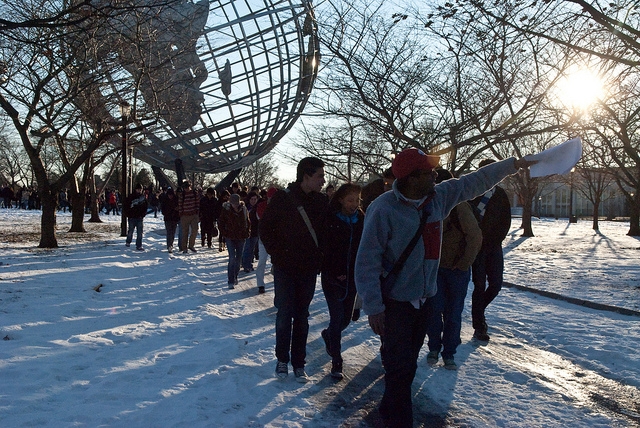 Agent Purnell guides the crowd at the Flushing, Queens location
I ran the downtown Manhattan meeting point along with three other megaphone wielding No Pants “Generals.” 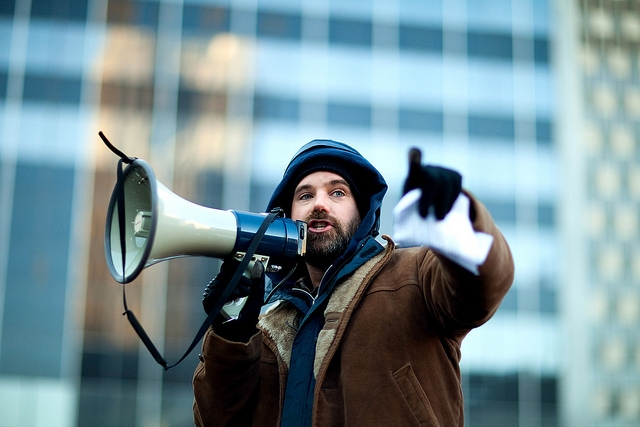 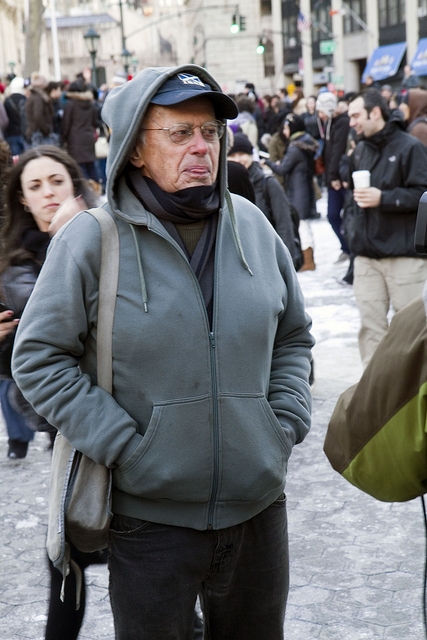 At 76, this guy was the oldest participant at our location 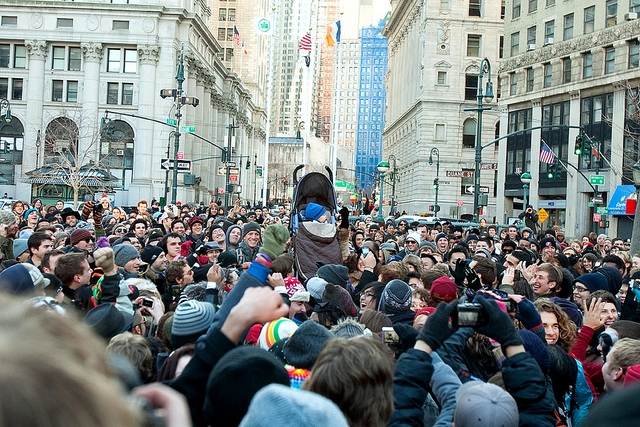 For a moment, it seemed like a 3-year-old kid was going to be the youngest, and then this stroller was hilariously lifted up in the middle of the crowd. Moments later shouts from the back of the crowd indicated their was an even younger baby present, 7 months. 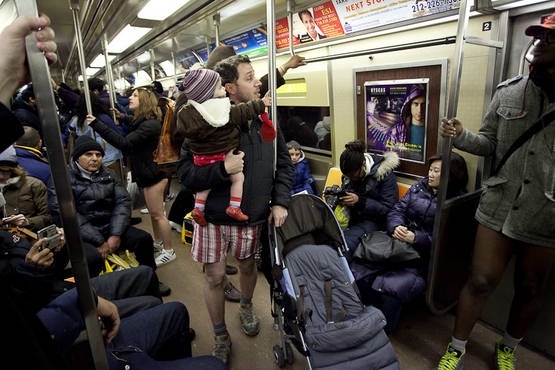 Agent Gorden with his child on the train, both pantless 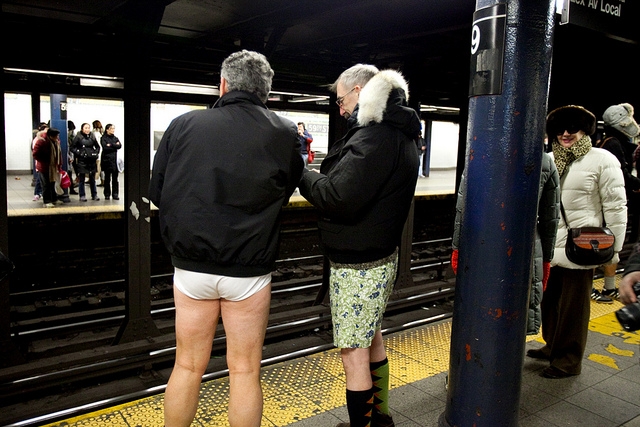 Two of our older participants 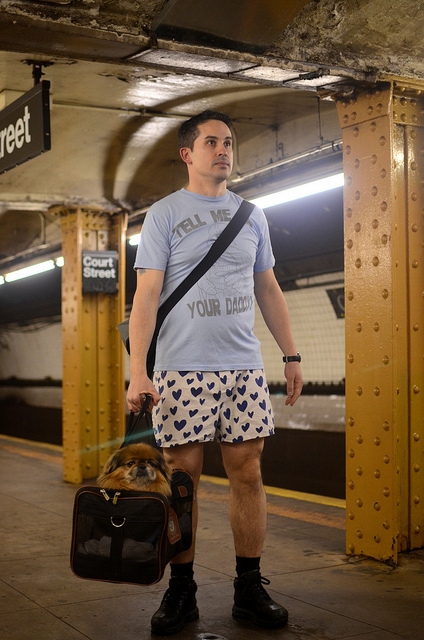 Even a dog participated this year! 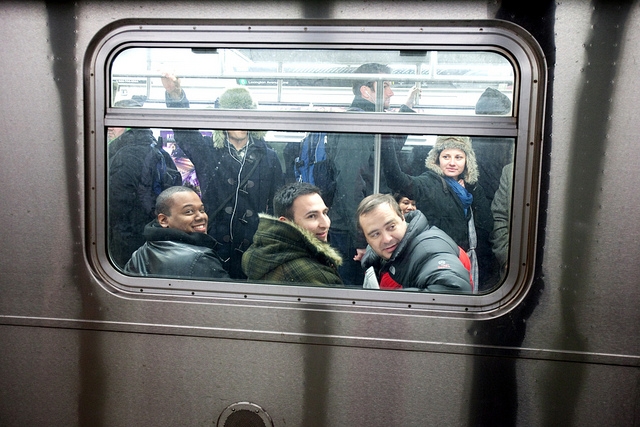 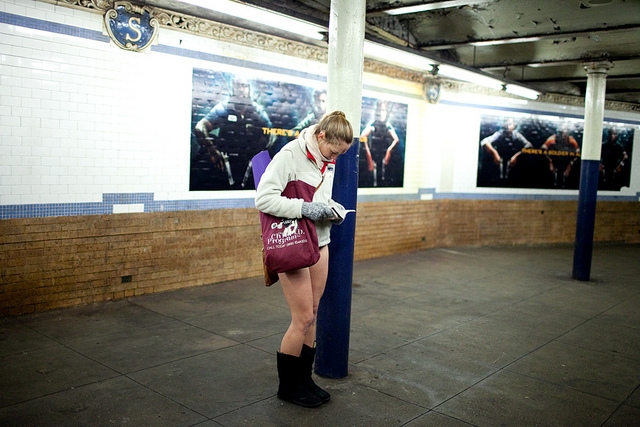 The mission started the same way on each of the 100 cars we took over. One person stood up, removed their pants, and exited the train to wait on the platform for the next one. This left lots of nice moments with people by themselves in their underwear. 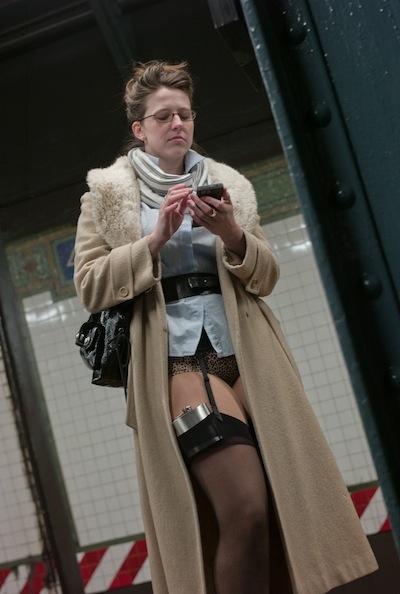 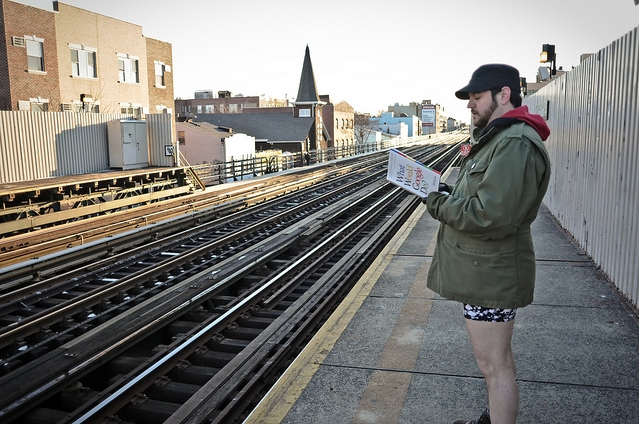 Agent Fiedler waits for the train on a chilly above ground platform. It was 32 degrees with 43 MPH gusts of wind. 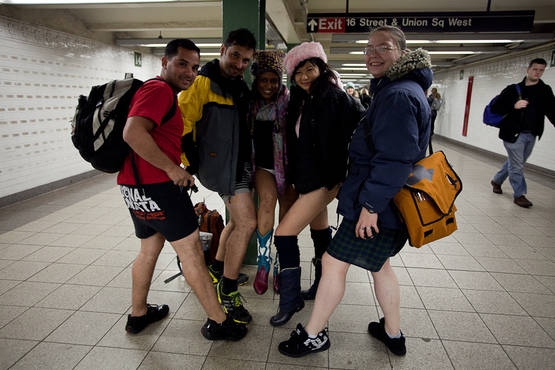 No Pants continues to become more diverse every year. It’s always cool to see the camaraderie that develops amongst random strangers participating in the same car together. 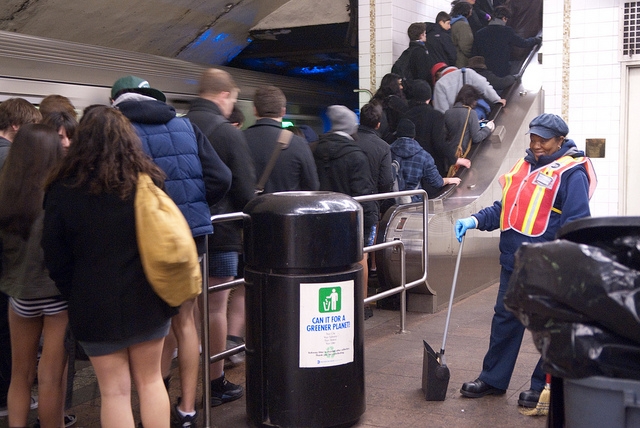 An MTA employee smiles as the pantless masses pass by, transferring trains 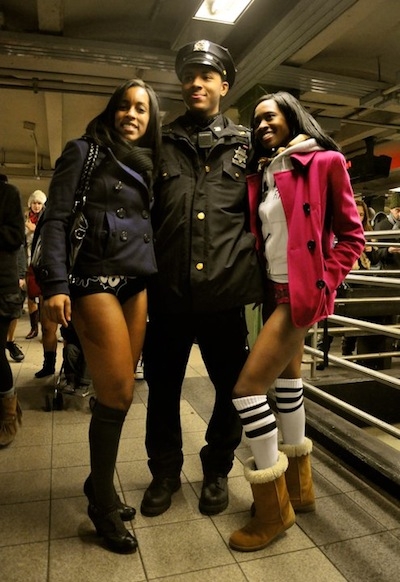 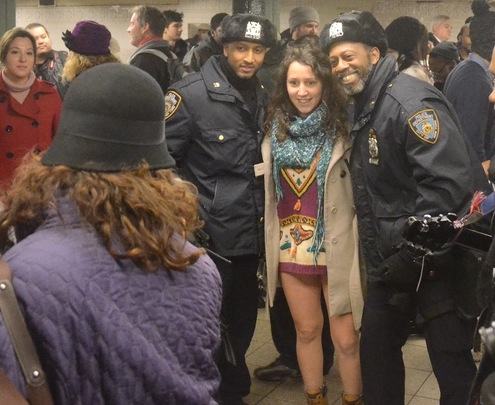 The police were again supportive of No Pants this year. They showed up and escorted us as if we were an official event. Many officers were happy to pose with our participants when asked for photos. 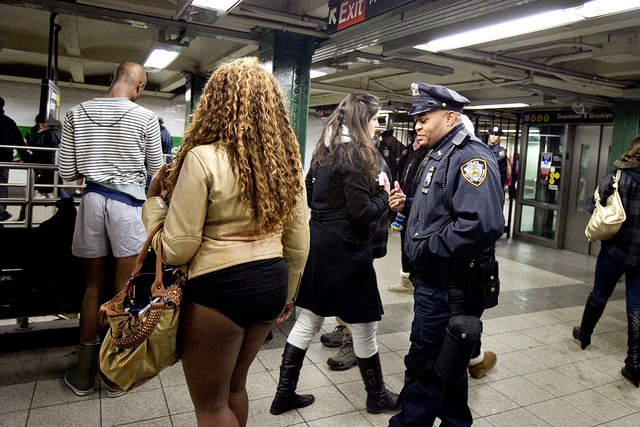 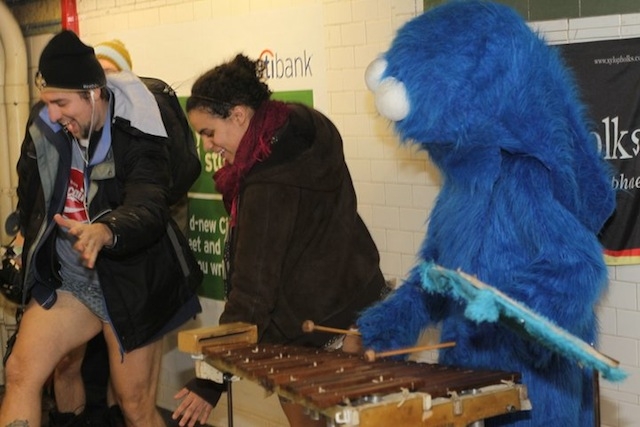 Dancing with the performers known as the Zylofolks 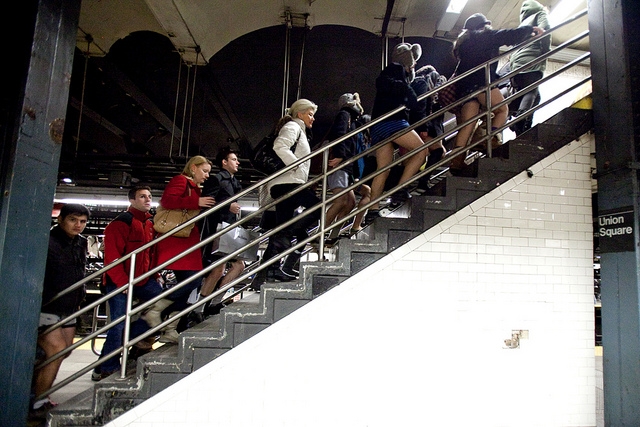 All 10 trains converge on Union Square and the crowd heads above ground. 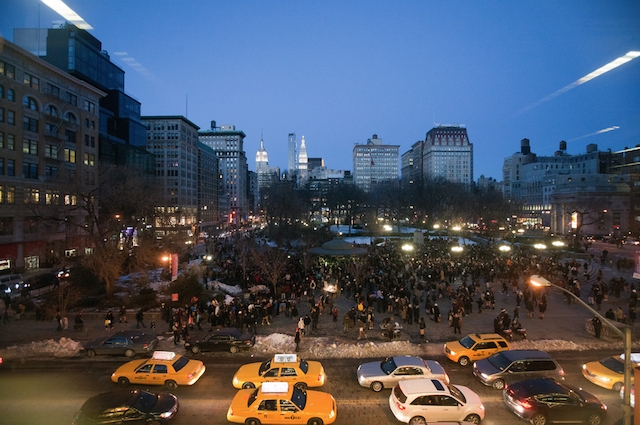 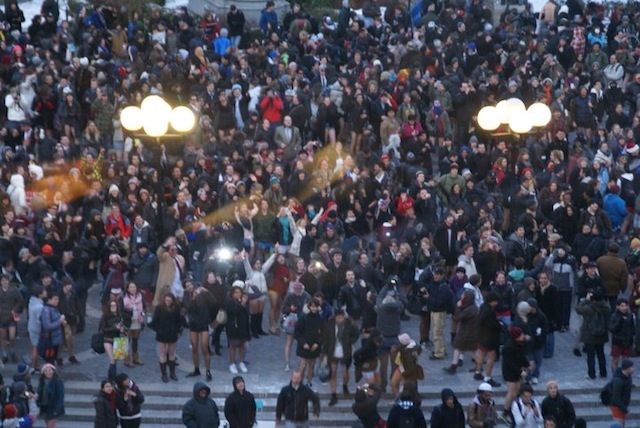 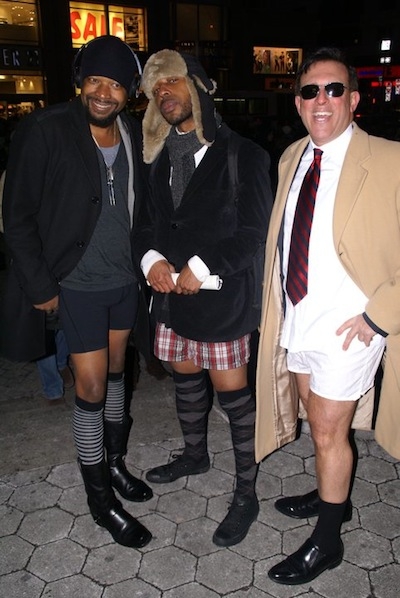 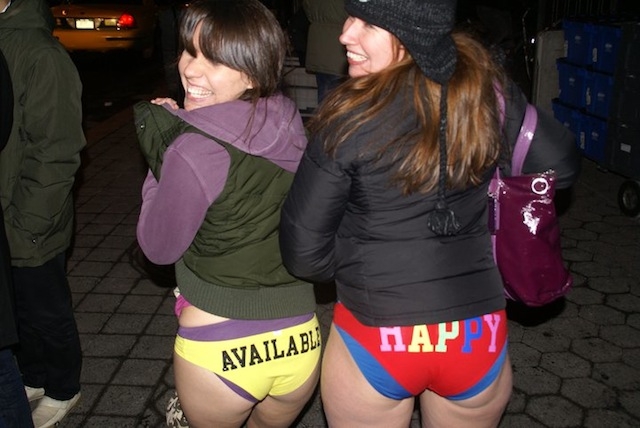 In a new trend this year, many participants had messages displayed on their butts. 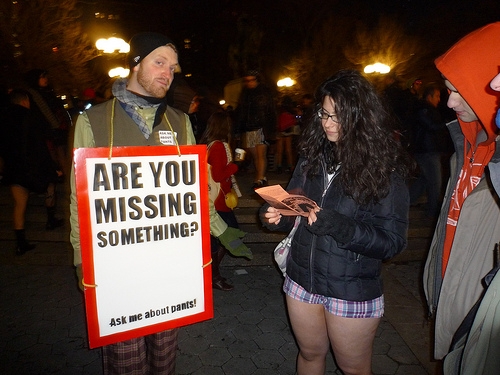 The Pro Pants crew was out for the fourth year in a row to preach the gospel of pants. Once again they had a 100% conversion rate! 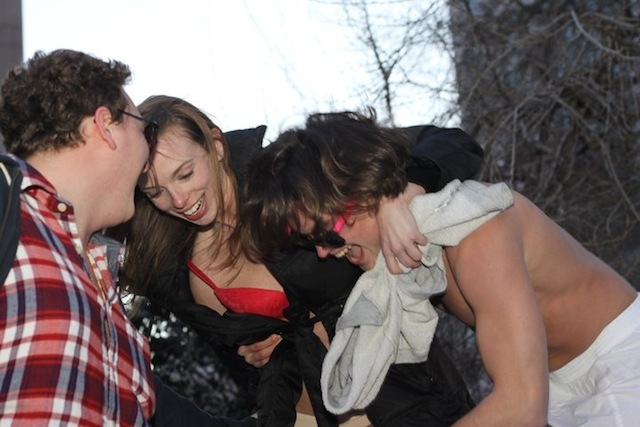 Despite the bitter cold, more than a few participants took their shirts off as well in Union Square. Hey, wrong prank! 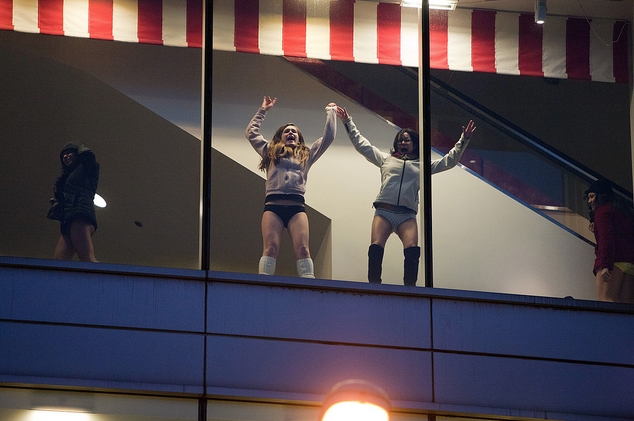 These girls caused more than a few to Look Up More. 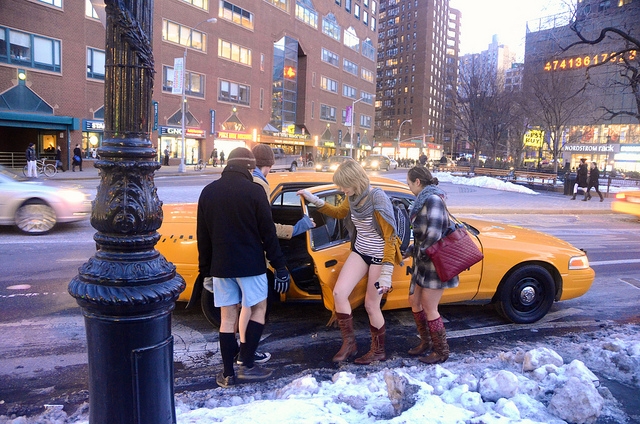 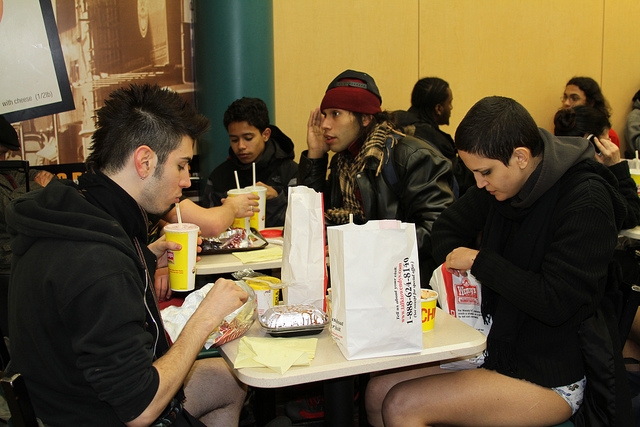 Late into the night pantless people could be spotted all over the city in a variety of bars and restaurants. 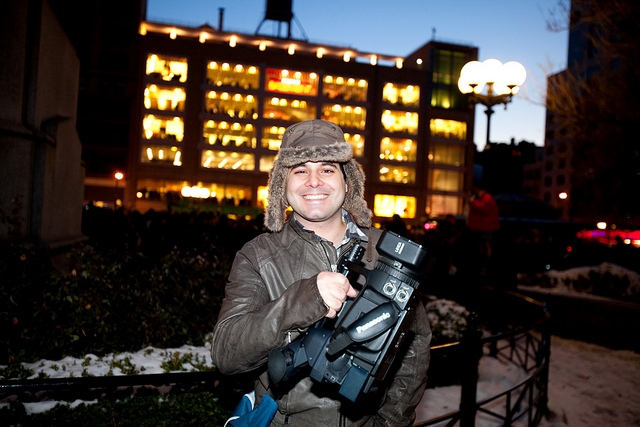 – To see links to full flickr sets of photos from all of our official photographers and to read comments from participants, check out this page: NYC Agent Reports

– Check out the comments in this post for reports and links to photos from the regional events: Regional Agent Reports

– I put together a flickr set using one photo from as many of the regional rides as I could find (not everyone sent me a photo or posted a link.)