Note: This is a fake mission we staged for April Fool’s Day 2010. We posted it on April 1, fooling thousands of people into thinking we actually rode the subway with exposed genitals. We pulled this off by wearing skin-colored underwear that would blur in a convincing way. Be sure to check out the comments from the people who were fooled below.

For our latest mission, over 1,000 people rode the subway without underwear or pants in New York City. Our annual No Pants Subway Ride has been a tradition for years, and we decided it was time to up the ante. Riders spread out over four different subway lines to surprise and delight everyday New Yorkers riding the train. Enjoy the video first and then go behind the scenes with our mission report and photos. We have blurred out the private parts of all the riders to keep the documentation safe for work. 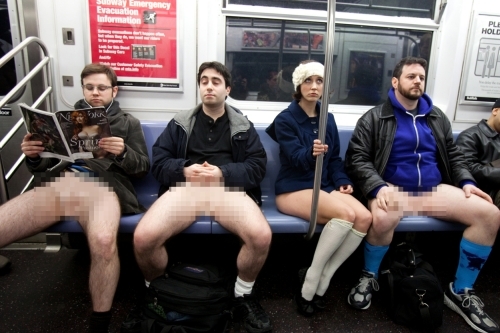 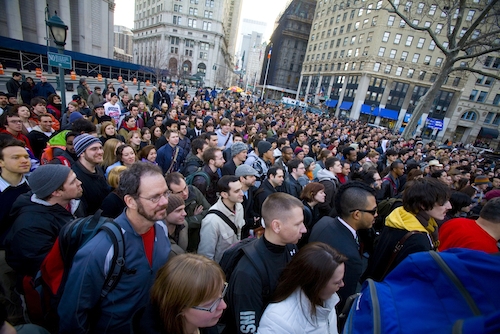 The crowd at Foley Square
I was a little nervous about this idea, as I could definitely see how some people might think it was pushing things a bit too far. Improv Everywhere is about giving people a positive experience and a great story to tell, and I really had to think through whether or not this was the best idea. After sending out an email to a group of small senior agents, I was comforted by the fact that they all thought it was hilarious and were eager to participate. There is definitely a huge difference between being in your underwear and totally exposing your genitals, so even the most senior “No Pants veterans” were a little nervous about pulling this off. I was also concerned about the legality. In 2006, No Pants was stopped by the police and six people were handcuffed in their underwear. But that case was dismissed and we couldn’t find any law on the books or MTA regulation stating that nudity wasn’t OK, so we figured we were in the clear. 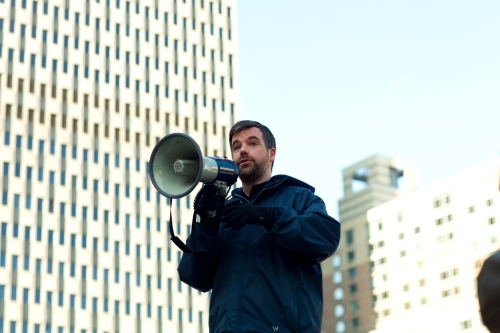 Giving instructions to the crowd
I was careful to instruct all of the participants to be as respectful as possible. This was not about offending people. We wanted to give those who saw it a memorable experience that they’d be laughing about for the rest of their lives. Logistically the event worked much like No Pants. We separated into four different train lines, and divided up into ten cars on each train. I figured it would only be fair if I went first on my car. 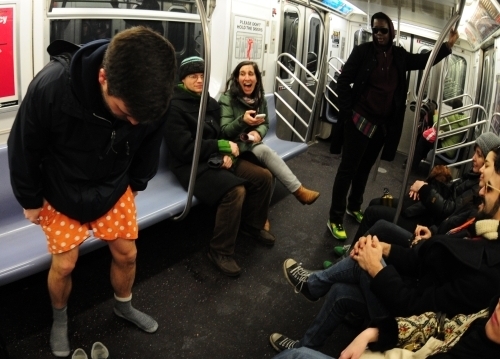 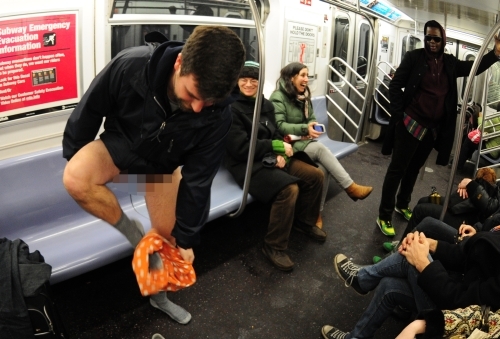 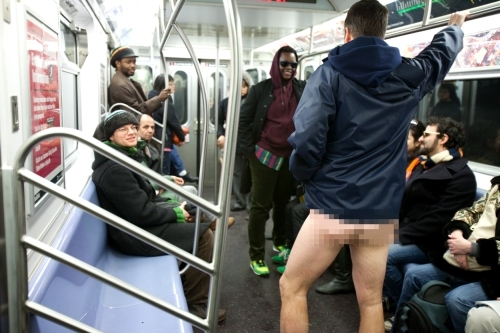 At the next stop Agent Shafeek stood up and removed his pants and underwear as well on the other side of the car. You could see people in the middle doing double takes looking back and forth at both of us. 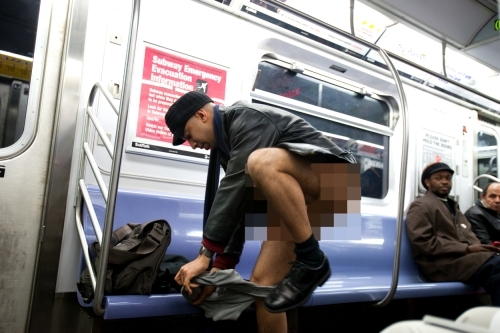 Agent Shafeek removing his underwear
Agent Lindquist was next. She was a little nervous, being the first female participant to de-underwear. 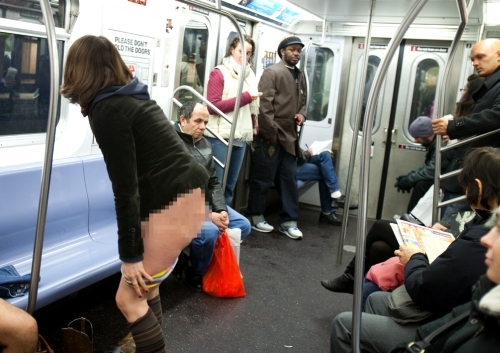 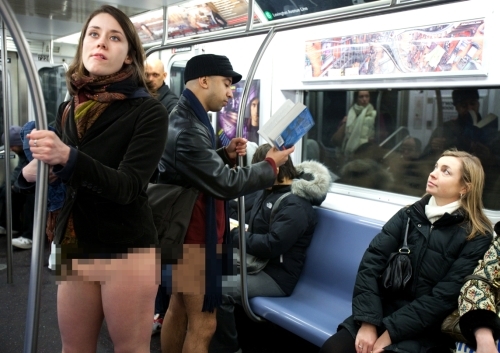 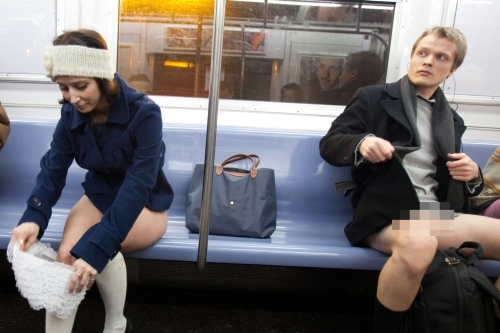 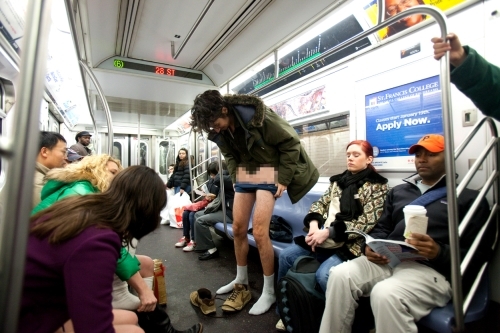 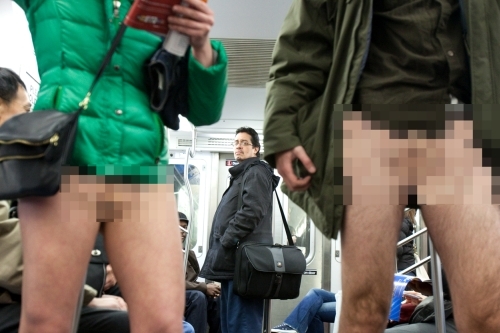 It was funny to see the reactions on the train. This guy found himself sitting right in between two half-naked Improv Everywhere agents. He couldn’t help but sneak some looks. 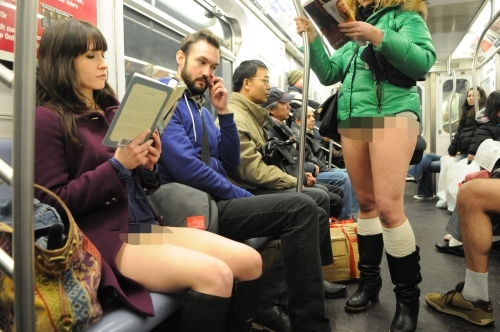 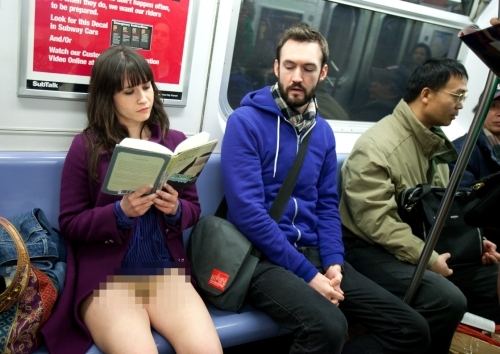 Agent Lathan was hilarious when he clumsily took his underwear off. He then went to go check the subway map, leaning in very close to a woman who was laughing hysterically at him. 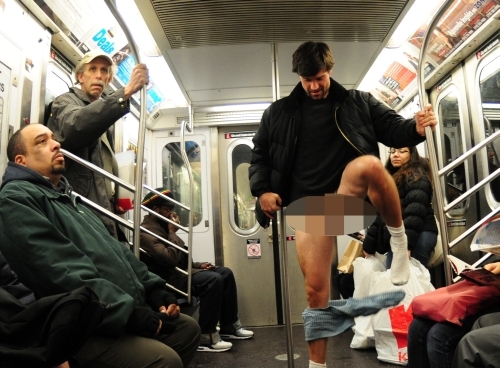 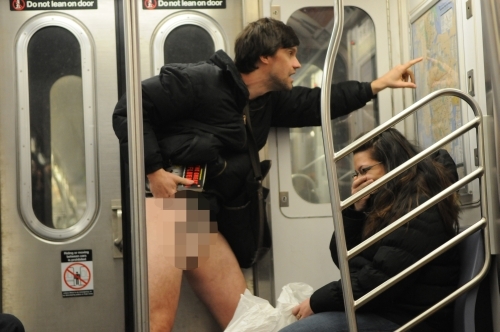 One thing that was different than No Pants is that we had participants transfer from the undressing car to the “target” car as a big group. We thought it might be a little unsafe to have people waiting on the platform alone with their genitals exposed. There was safety in numbers. 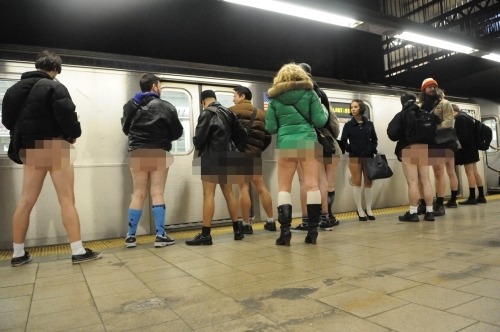 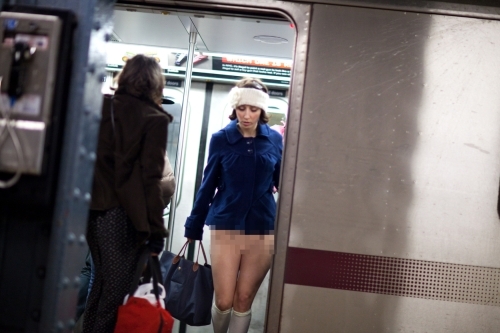 Our participants got some great reactions when we were waiting on the platforms. There were so many laughing and smiling people passing by. 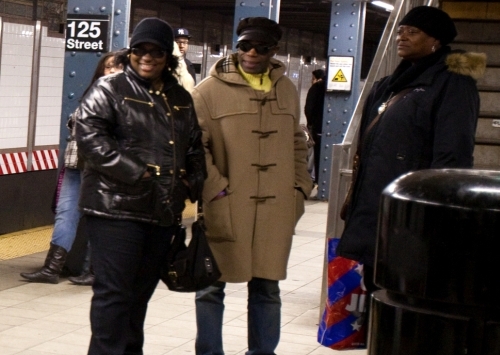 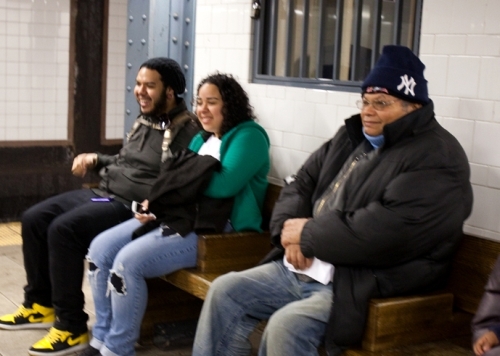 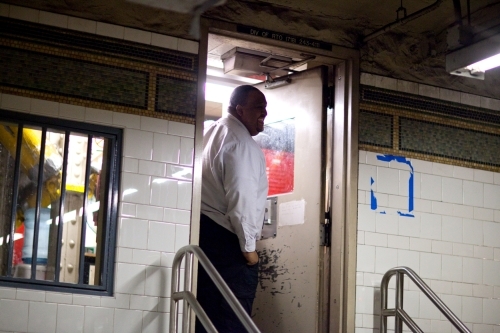 A laughing MTA employee comes out of his office to check us out
Once everyone transferred to each “target” car on their second train, things got really funny. Imagine the doors opening and 30 half-naked people getting on your car. 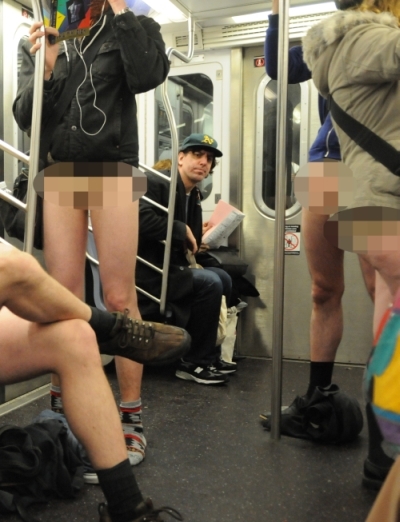 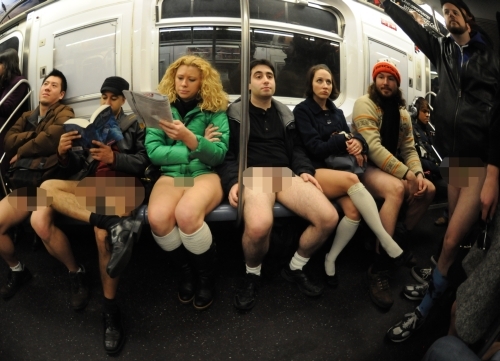 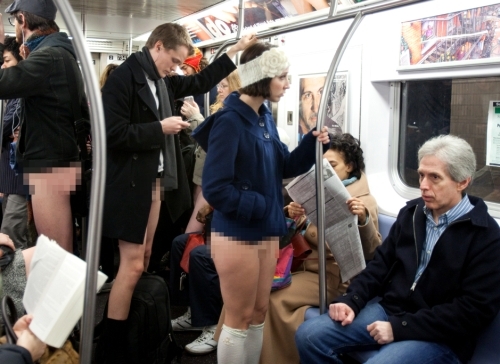 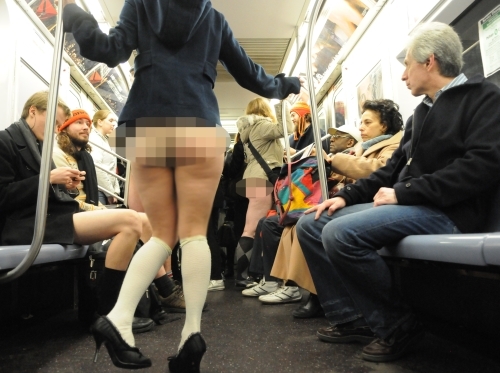 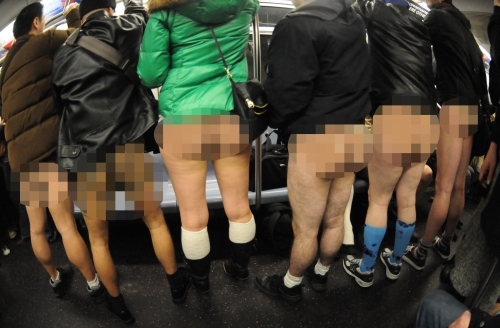 All of the train lines converged on Union Square at the end of the mission, which means that within a short stretch of time 1,000 pantless and underwearless people passed through the station’s exit turnstiles. We hope to make the No Underwear Subway Ride an annual event, just like No Pants. If you’re interested in participating next year (or starting one in your own city), be sure to sign up for our mailing list. We’ll announce the date of next year’s ride shortly after next year’s No Pants.