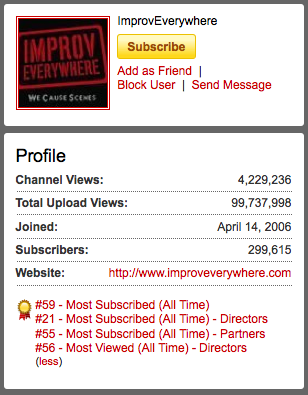 Improv Everywhere is about to pass 100 million total views on YouTube! We joined the site in April of 2006, about five months after YouTube started. While it feels like we’ve *always* been on YouTube, Improv Everywhere existed for four and half years before we had a YouTube channel (and for about four years since.) Without YouTube, we’d still be documenting our missions with just text and tiny photos. YouTube has enabled Improv Everywhere to reach an international audience without needing a green-light from anyone but ourselves. So, hooray for YouTube!

We’re also on the cusp of reaching 300,000 subscribers on YouTube. To celebrate, we’d like to give away something special to the 300,000th subscriber. The first person who posts a link in the comments below to a screen shoot of Improv Everywhere’s channel after we’ve passed the 300k mark will win the last remaining Improv Everywhere Best Buy Blue Polo shirt. Yup, the shirt that is so illegal to sell we got a cease and desist letter about it! Only 24 of them were ever made. 12 were sold and 11 were given out as gifts to senior agents. One adult size small remains!

Be the first to post a screen shot of our YouTube channel displaying over 300k subscribers and the shirt is yours.

And if you’re not a subscriber to our channel, speed this contest up and subscribe now!