For our latest mission, a 13-member handbell choir provided some unexpected accompaniment for a Salvation Army bell ringer on Lexington Avenue in Manhattan. Enjoy the video first and then go behind the scenes with our report below. 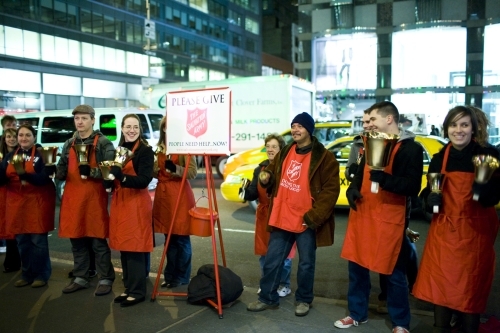 Agent Eppink came up with the idea for Guerrilla Handbell Strikeforce several years ago but couldn’t find a handbell choir to pull it off. When he approached me about doing it with Improv Everywhere I immediately loved the idea. It sort of felt like a Christmas version of our old Best Buy mission.

Agent Eppink got in touch with Cory Davis, the bell choir conductor for Christ Church United Methodist in Manhattan, and he quickly agreed to have his choir help out. The church was located right in the heart of Midtown, which made their rehearsal room a perfect staging point for the mission. 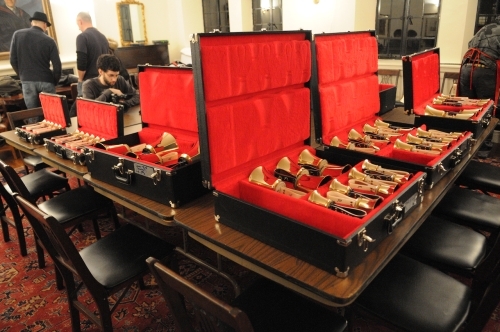 The bells
Agent Davis arranged a version of “Joy to the World” that could start with one bell and gradually grow to include the entire choir. We wanted the mission to have a slow build. 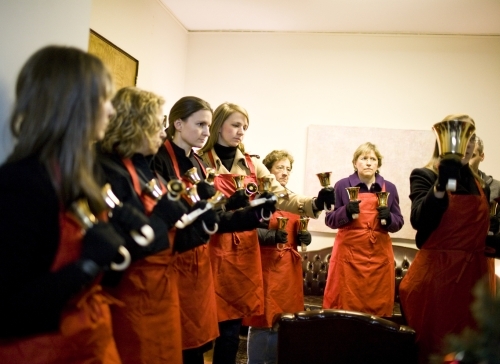 The choir rehearsing before the mission
Since this mission was all about sound, we brought Agent Reed on board to make sure we got the best possible audio. He put wireless mics on three of the bell ringers. 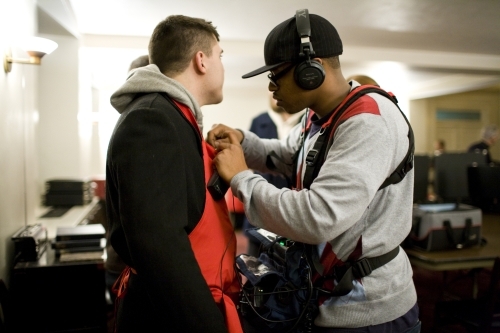 Agent Reed puts a mic on Agent Davis
After the choir finished rehearsing we spent some time staging the choreography of the handbell ringers’ entrances and coordinating our video strategy. Most of the cameras used to document this mission were DSLRs. Because they look like still cameras, our agents were able to blend in with the other tourists on the street snapping photos of New York. 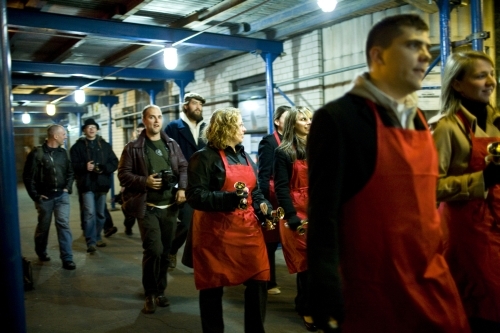 On the move
Agents Eppink, Adams, and I spent a couple of nights scouting the neighborhood to figure out where the Salvation Army bell ringers normally set up shop. During the day you’re likely to find them all over the place, but at night there was only one spot where they stayed late– Bloomingdale’s. 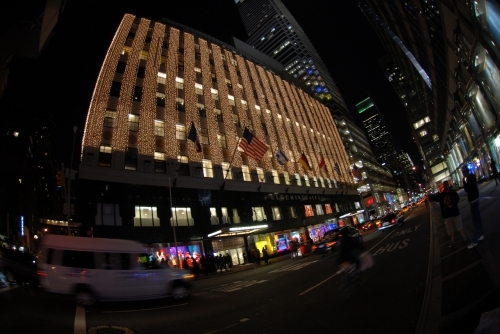 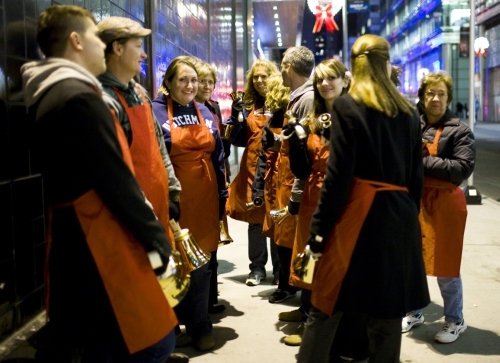 The choir hiding around the corner
As we hoped, there was a bell ringer stationed in front of the entrance to the store. The Salvation Army often uses volunteers for this job, but in New York almost all of the bell ringers are paid, seasonal employees. Our goal with this mission wasn’t to make any sort of statement about the Salvation Army (an organization that I’m sure does lots of great charitable work, but also is not without controversy), but to create an awesome moment for one bell ringer and the random New Yorkers and tourists who happened to be in the right place at the right time. 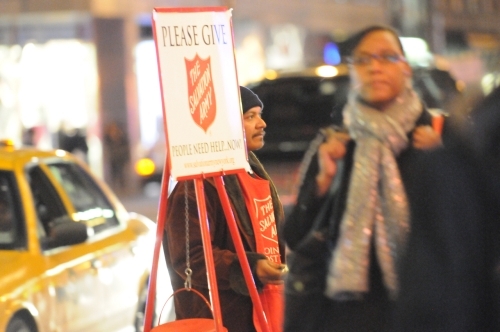 The bell ringer, moments before
The bell ringer was set up right by the curb, facing the store entrance. In order to stand behind him, some members of the choir would have to stand on the edge of the street. I was worried about the busy traffic on Lexington Avenue, so as a safety precaution I stood in the street to make sure cars stayed clear. The lane was mostly used by cabs picking up customers, so we wouldn’t gum up traffic too much for the two minutes we were there. All I needed was an orange vest and a traffic cone to look official. 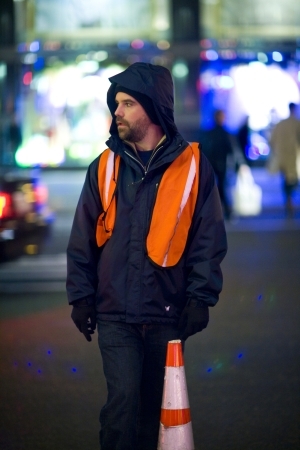 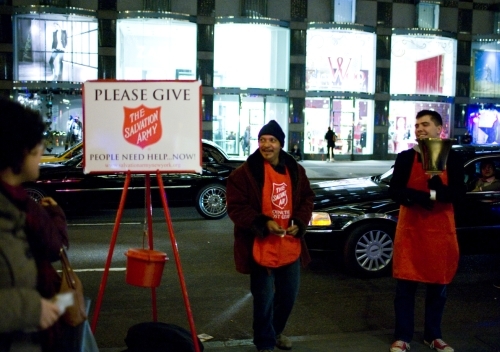 Agent Davis walked out and stood next to the bell ringer with his enormous bass bell and red apron. “How you doing?” he asked, and then started playing. The juxtaposition of his huge bell and the bell ringer’s tiny one was really a prank all by itself. The bell ringer immediately started laughing. 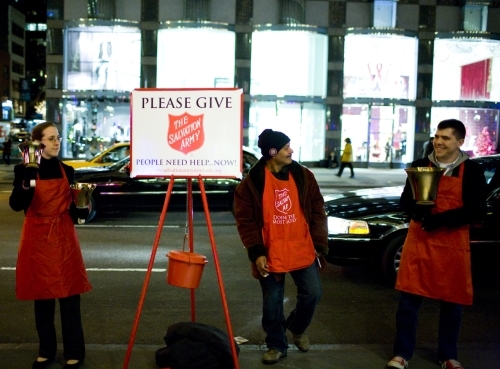 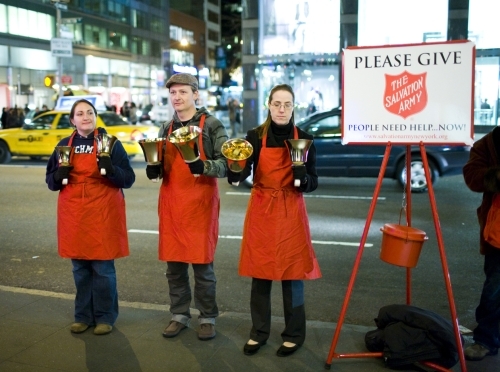 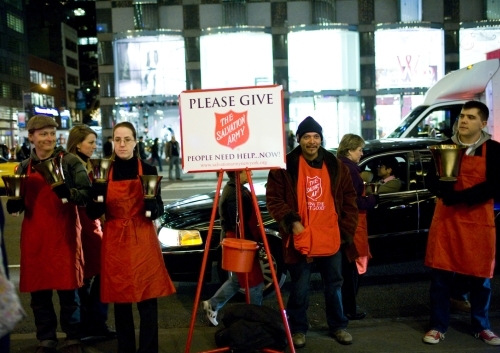 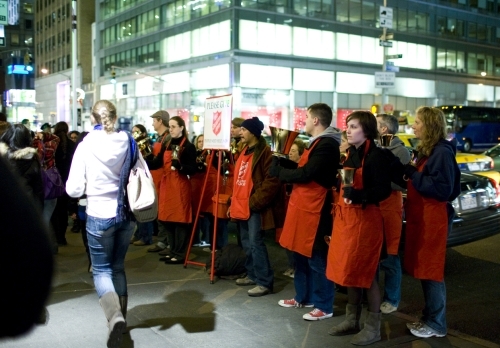 The Salvation Army ringer becomes part of an ensemble
Once everyone was in place, the choir began their rendition of “Joy to the World.” Christmas shoppers on the street starting stopping to watch and take photos. 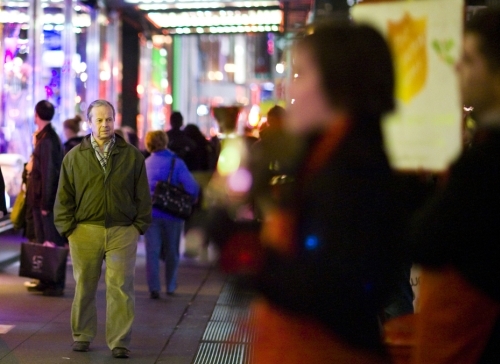 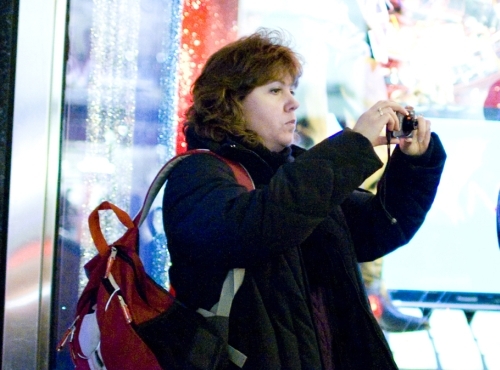 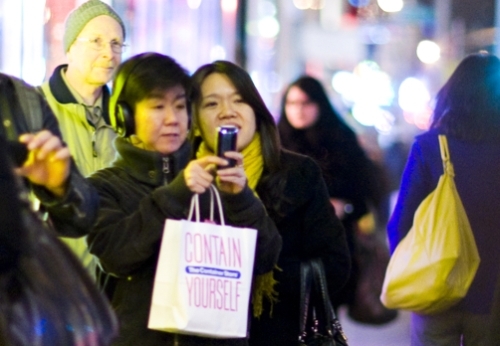 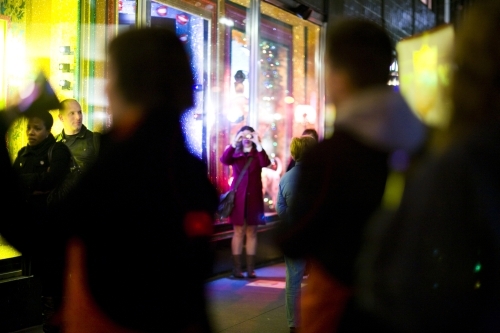 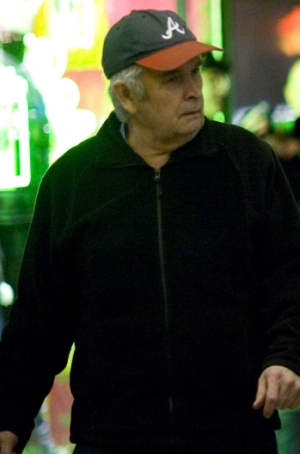 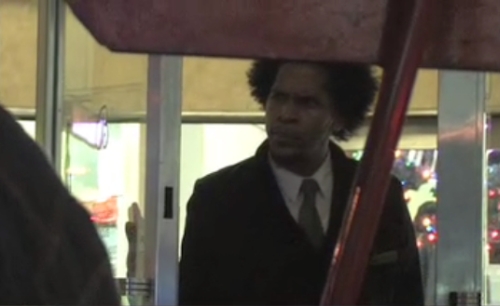 An employee ducks his head out to see what’s going on
My guess is that most of the people who witnessed the mission figured it was either an official Salvation Army performance or perhaps a promotion that was produced by Bloomingdale’s. 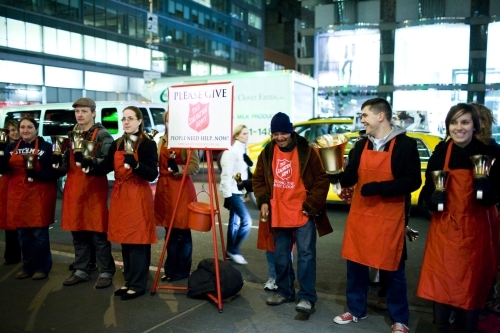 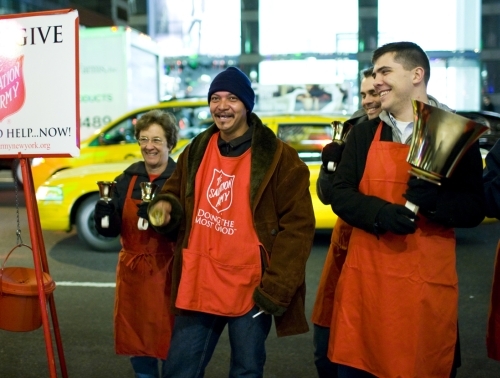 After the song ended, the handbell choir starting leaving in the reverse order in which they came, working back down to just Agent Davis and the Salvation Army worker. 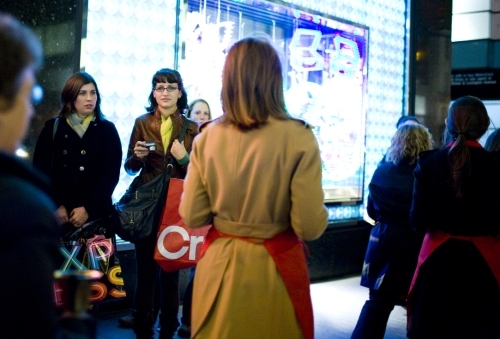 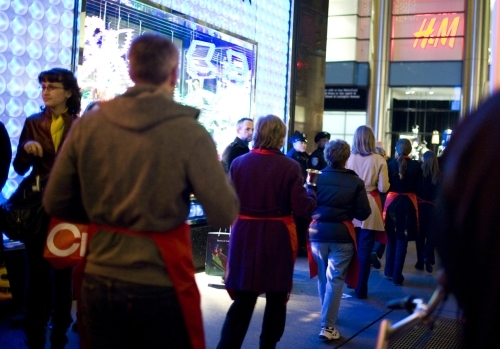 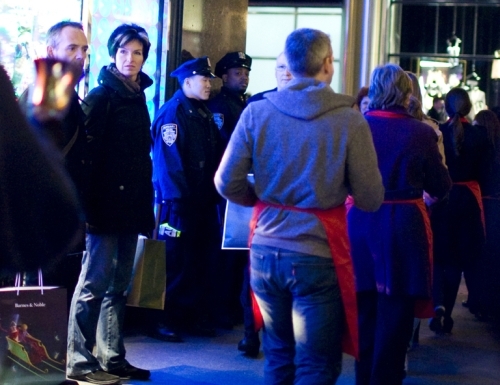 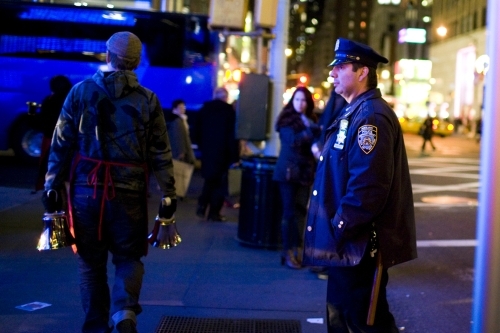 Just a few minutes after it had begun, the bell ringer was again by himself on the street and the choir was nowhere to be found. 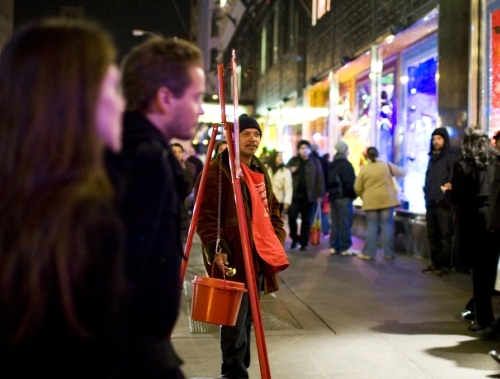 Shortly after the mission, Agent Eppink and I had conversations with the bell ringer, posing as random curious people. He didn’t speak much English, but fortunately a friend of one of the choir members who happened to be standing nearby was fluent in Spanish. We recorded a little interview with him in Spanish and then translated it:

Well, first I thought they had come from the store here, that they were part of the business. “That’s fine,” I said to myself. I saw that they all had red aprons like me… When the first guy came, I wanted to say, “Hey! Give me that bell, and I’ll give you this one!” Then I saw that they were all coming up surrounding me and I said to myself, “OK, what’s going on?” It’s Christmastime, so we’ve got to be merry… If we’re not merry here amongst ourselves, then what do we have to be merry about? But yeah, the whole thing was really nice.