Now that the cat is out of the bag about our Best Funeral Ever April Fool’s Hoax, we figured it would be fun to share some of the behind-the-scenes video and photos from the project. Here’s how we did it, along with some of the more ridiculous things we cut for being just too over-the-top.

Obviously we would never, ever do an Improv Everywhere mission at a real funeral. The goal for the hoax was to make it just believable enough that people would think we had somehow lost our minds and crossed the line. It was a great opportunity to parody ourselves, while also celebrating April Fool’s on our site like we do every year. If you’re not familiar with the Best Game Ever and the Best Gig Ever, give those a read to understand the context of the parody. 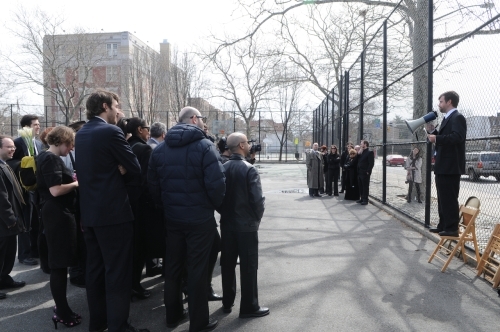 We met in a park a short walk from Brooklyn’s Greenwood Cemetery to shoot the “Agent Todd explains the mission” part of the video. I tried to play it real while also saying ridiculous things like, “If you can cry on cue, cry on cue.” You can see the “family” and the “priest” hanging out in the distance, out of the shot. We were also careful to keep the chairs out of the shot, since we would use them later for the funeral. 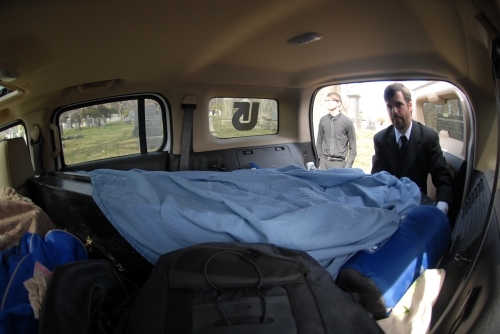 Coffin covered by a blue sheet
Agent Reeves had access to a Hummer, so it served as our Trojan Horse for the coffin and all of our chairs. I was very nervous about smuggling the coffin in without getting noticed. Surely you’re not allowed to bring a prop coffin into a cemetery. We luckily breezed right by the security guard at the entrance, telling him we were just there to tour around. Greenwood Cemetery is a National Historic Landmark, so people come to tour it all the time. It’s the highest point in all of Brooklyn and actually has great views of the city skyline. 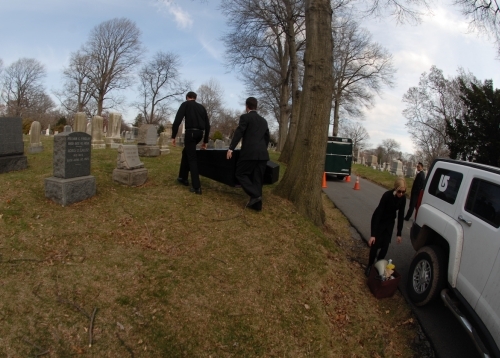 Agents Lee and Todd carry the coffin
We had two “lookout agents” on duty while Agent Lee and I carried the coffin out of the car and across the cemetery to the spot we had picked out. Guards at the cemetery regularly patrol the grounds in SUVs, so we were very paranoid that one would drive by and catch us walking around with this ridiculous coffin. 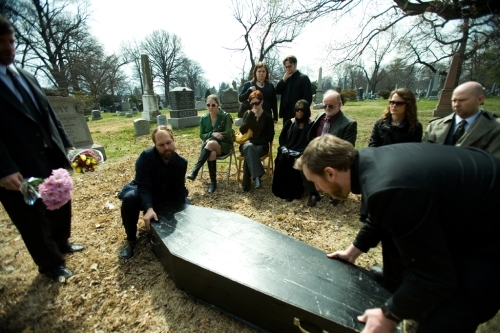 Agents Nicholson and Walker adjust the coffin
I actually rented a really nice, realistic coffin from a costume store, but it turned out to be too large even for the Hummer. I guess that’s why hearses exist. Anyway, we had to settle for the wooden Dracula coffin, hoping that if we kept it out of full view it would still be believable. 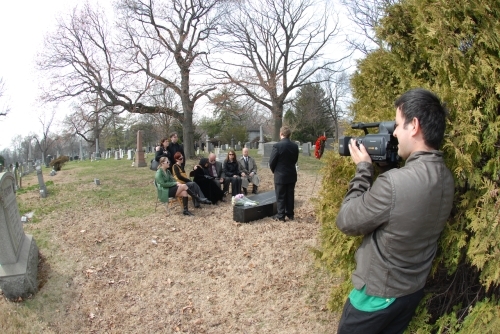 Agent Adams films
Agent Adams and I spent some time in the cemetery the day before looking for the perfect spot for our funeral (and observing where and when the security vehicles patrolled.) We found this awesome spot right next to an enormous bush. The bush would help us out in two ways: it partly hid us from the patrol guards, and we could act like we used it to hide our cameras in the video. It was also a nice open space that did not have any graves underneath it. Obviously we didn’t want to make a comedy video on top of someone’s grave. 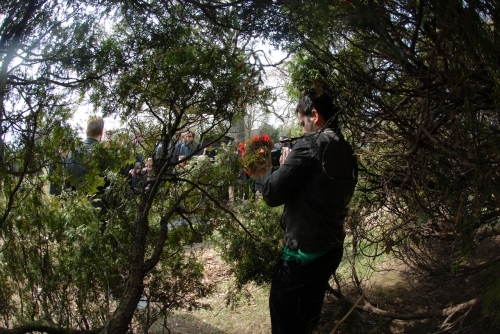 Shooting through the bushes
It was important that the people we cast to play the family members were not regular Improv Everywhere agents. We didn’t want people to spot someone from another video of ours. Agent Moore was able to get a small group of actors from her theatre company, No Tea Productions, to play the parts. Agent Adams’ parents were in town, so we enlisted them as well. 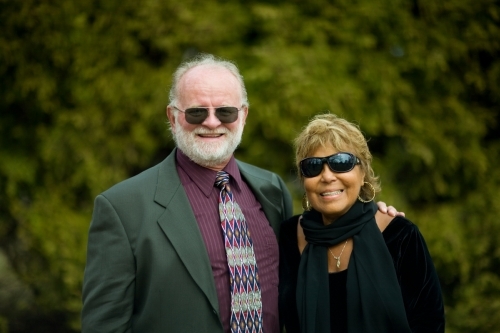 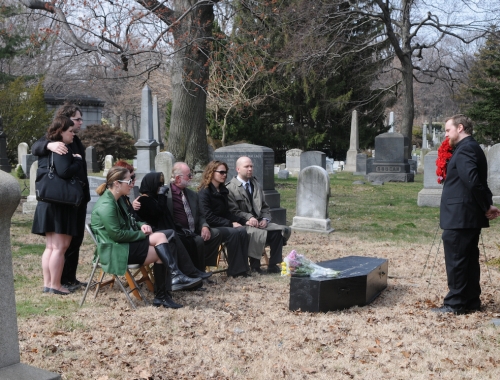 The “Family”
Agent Walker owned a priest costume, so we cast him as the priest, hoping no one would remember that he also played the part of Steve in The Mp3 Experiment III. We kept his face out of the video as much as we could. Agent Walker also made the music for the video. I gave him the direction of “upbeat funeral music,” and he delivered just that. It was also a chance for him to parody the music he’s made for other IE videos. 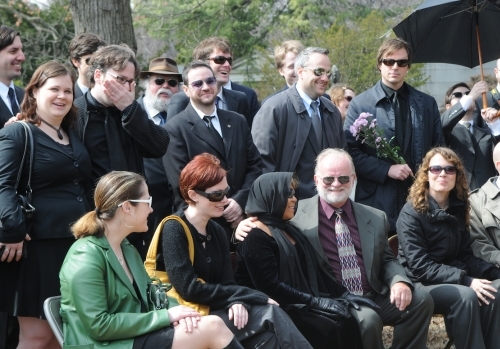 Actors laughing between takes
We worked under the assumption that at any moment we were going to get caught and asked to leave. Being a National Historic Landmark, the cemetery is public property, but they have lots of rules and regulations and surely filming a fake funeral is not allowed. We got all of the shots we needed as quickly as possible. Once we had all of the important stuff in the can, we decided to stage some more over-the-top moments, on the off chance they worked. This led to some pretty ridiculous bits that definitely couldn’t be used in the main video if it was going to be believable. 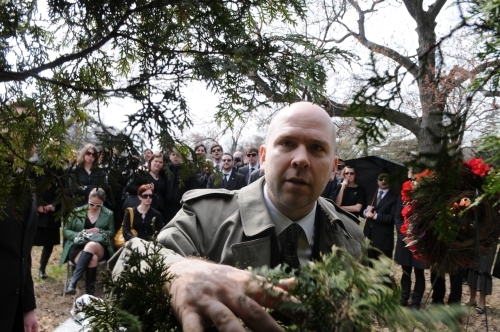 Agent Mather as the “grandson” spots the camera 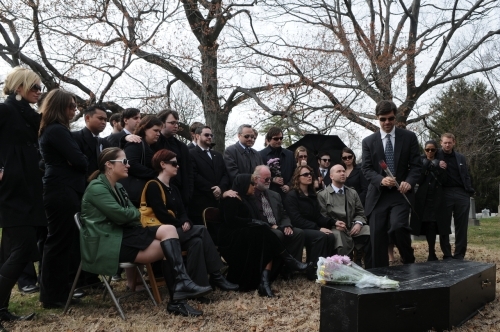 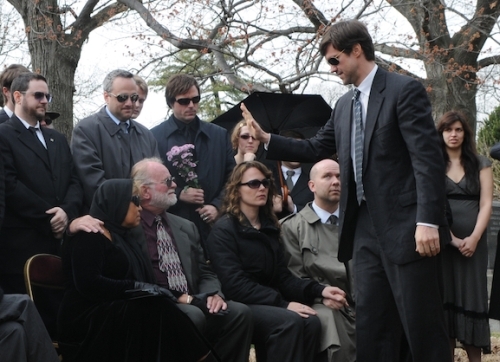 …and then offers the family members a high five 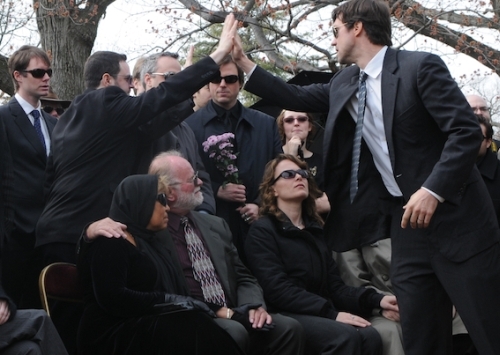 Agent MikeTheMan won’t leave him hanging
We got some footage of Agent Reeves playing the part of “The mistress not allowed to sit with the family.” 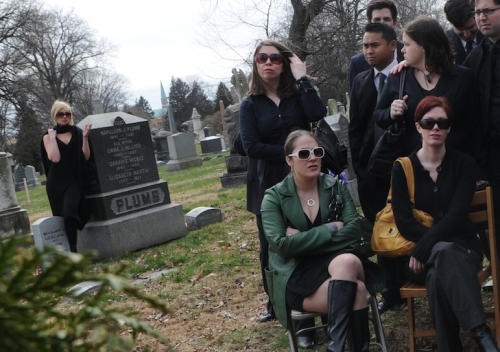 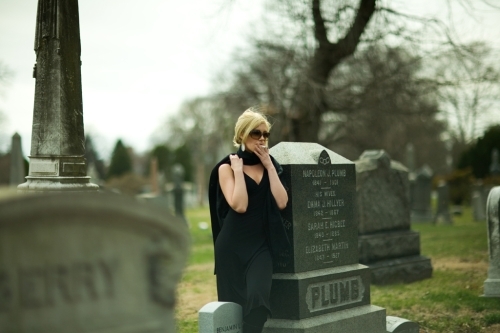 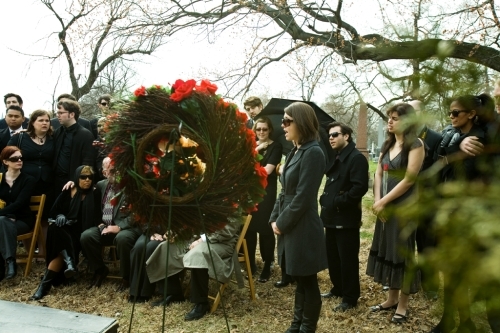 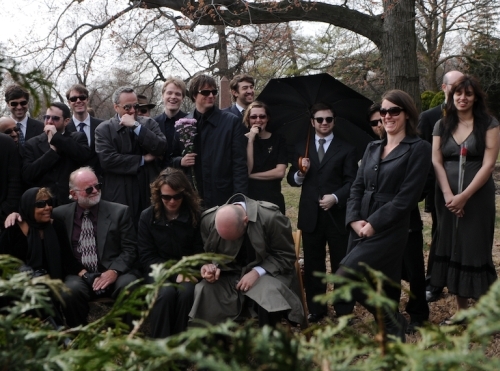 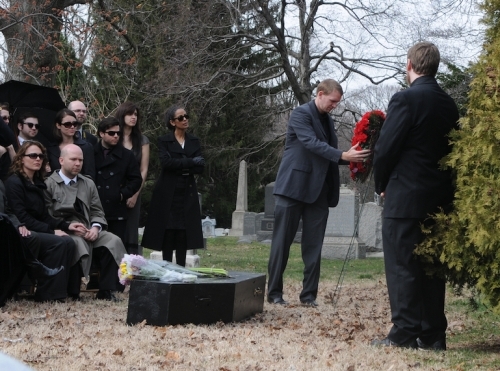 Rather than bringing his own flowers, Agent Ace$Thugg stepped forward and grabbed the wreath from the stand and placed it on the coffin. 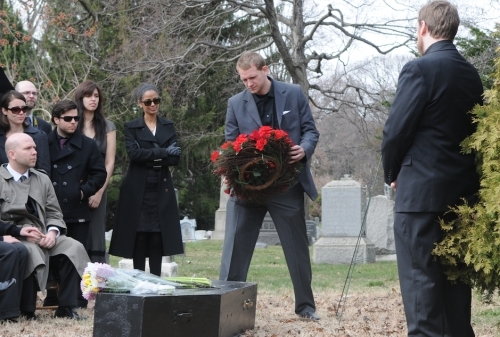 He then tripped over the coffin when Agent Mather tried to confront him. 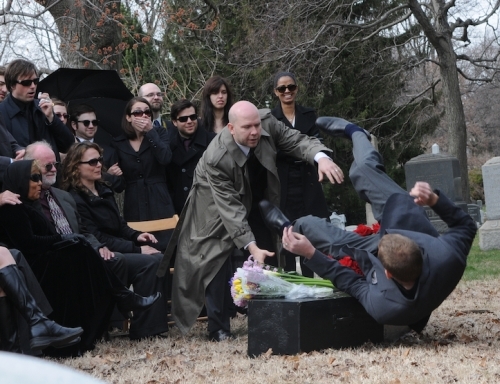 Finally we staged a moment where Agent Mather got so fed up with Agent Simmons patting him on the back, he got up to punch him in the face. 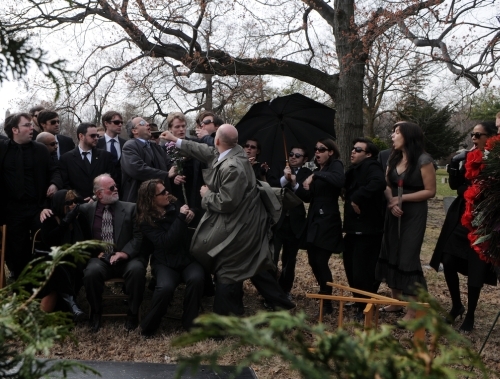 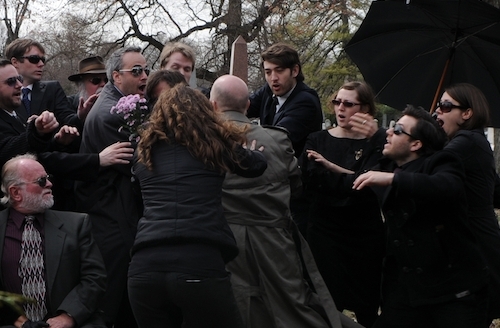 Once we got all the shots we needed (and more than a few we didn’t need), we quickly packed up and put the coffin and chairs back in the Hummer. A security vehicle actually drove by while Agent Eng and I were carrying the coffin back, but fortunately the guard couldn’t quite see us through the trees. 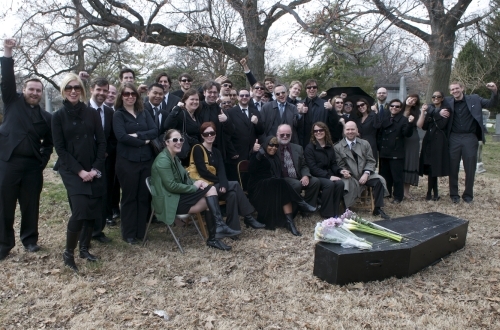 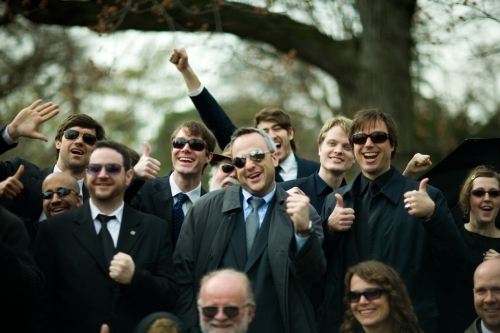 We had no idea how the mission would go over on April 1st. We figured it had a chance of fooling lots of people early in the morning, but once everyone knew what day it was the joke would be obvious. What we didn’t anticipate is that some people would know it was April Fool’s but think that the video was an April Fool’s joke on a grieving family rather than a joke on THEM. I couldn’t believe how many people thought that. It implies we crashed a funeral, shot and edited a HD video, and posted it to YouTube all in the same morning. Improbable! Also, why would a prank website just post another prank on April Fool’s? April Fool’s is the day everything is backwards.

It was fascinating to see the different ways people reacted to it. Many were outraged, some got it and played along, others didn’t get it but still thought it was a good idea (it’s not!), and more than a few claimed they would never visit our site again. There are nearly 500 comments on the original post. They’re pretty hilarious to read so check them out if you haven’t. Even crazier are the comments on YouTube where most people STILL don’t get that it was a fake funeral even though I’ve edited the title, description, and annotations to plainly state what happened.

So basically the extent of their reporting is watching a video on YouTube and then describing it as fact on air. They didnâ€™t bother to email Improv Everywhere for comment, call the cemetery to verify, or try to get a quote from the â€œfamily.â€ They just watched the video and threw it on TV. Great journalism!

Update: The CW filed a copyright claim against us for posting their video of our video.