The 8th Annual No Pants! Subway Ride will take place on Saturday, January 10 in New York City. More info with the meeting point and start time will be posted to this site in early January. For now, save the date. Like last year, we’re encouraging folks in other cities around the world to stage their own No Pants rides on the same day.

If you would like to commit to organizing a ride in your city, first check to see if your city has an active group on the Urban Prankster Network already organizing a ride. Anyone organizing a No Pants event should let us know by leaving a comment on this post. In a few weeks we will publish a list of all participating cities along with links to details, Facebook events, etc.

Below is a short history of the No Pants! Subway Ride from its inception in 2002 to today. 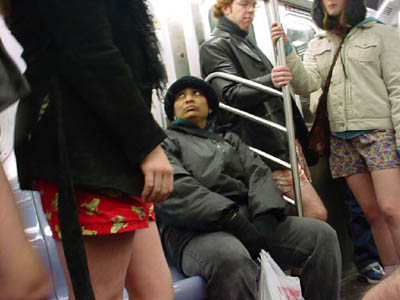 The second No Pants had around 30 participants, including a few women. A few people played characters for the first time– businessmen, tourists, etc. The conductor noticed what was going on and shouted over the PA, “This train is not a playground.” The video has never been put online. Maybe one day. 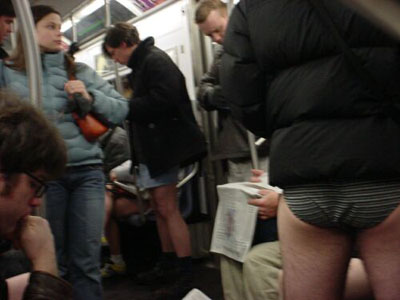 The third No Pants was filmed by ABC News 20/20 for a segment they were doing on Improv Everywhere which never aired. We foolishly didn’t film it with our own cameras, so there’s no video. Bill Ritter, a 20/20 correspondent, rode the train with us but elected to keep his pants on. About 40 people participated. 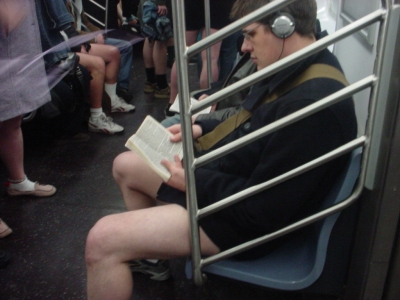 The fourth No Pants was filmed by This American Life for their Showtime television show. The segment on Improv Everywhere aired as part of their pilot episode, but almost all of the No Pants footage was cut from the piece. Once again we foolishly didn’t film it ourselves. Around 50 people participated.

The fifth annual No Pants ride was abruptly halted by a cop. All passengers, including those not participating, were forced to exit the train as it was taken out of service. 8 people were handcuffed in their underwear and taken into custody. A month later a judge dismissed all of the charges. It is not illegal to wear your underwear in public in New York City. Just ask the Naked Cowboy. The incident was reported by news agencies around the world. David Letterman made two monologue jokes about it and staged a No Pants Cab Ride as a parody. Keith Olbermann interviewed Agent Todd about the legality of No Pants. Around 150 people participated in the ride.

In sharp contrast to the year before, the sixth annual No Pants went off without a hitch. 300 people participated on what was a particularly mild January day. Three police officers showed up at our meeting point, but they informed us they were only there to make sure everyone had a good time. We dropped the “pants seller” bit this year after too many people lost their pants in 2006. Instead, participants hid their pants in a backpack. People of all colors, shapes, sizes, and ages came out this year.

The seventh annual No Pants ride had 900 participants in New York, and another 1,000 or so in 9 additional cities around the world. In New York we had to use three separate train lines to accommodate the crowd. For the first time there were at least as many women as men. Rides took place in Baltimore, Boston, Chicago, Portland, San Francisco, Salt Lake City, Toronto, Washington DC, and even Adelaide, Australia.

No Pants 2009 will take place on January 10, 2009 in New York and an unknown number of cities around the world.