For The Mp3 Experiment Chicago, around 300 people downloaded the same mp3, pressed play at the same time, and had a blast together on a rainy Sunday afternoon in Lincoln Park. We partnered with Yahoo! to transform The Mp3 Experiment into a full-on North American tour; we started with the New York event, and then made stops in Toronto, San Francisco, and Chicago. You can see a highlight video of the entire tour here.

Below is the mission report for the Chicago event. Enjoy! 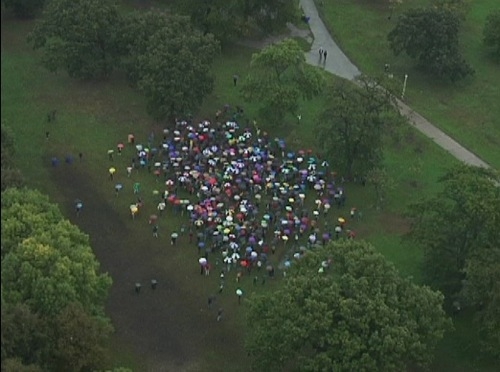 If you’ve never heard of The Mp3 Experiment, check out our coverage of the past four years: 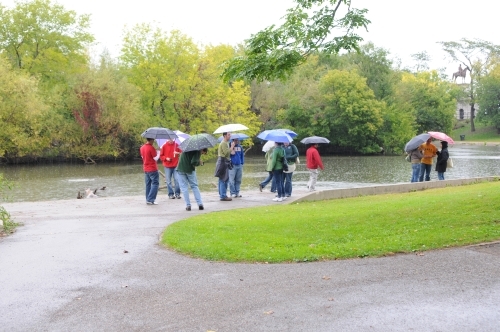 Our Chicago Mp3 Experiment wins the award for the worst weather, though the rain didn’t seem to stop anyone from having fun. It was a gray, overcast day and it decided to rain just moments before our start time (and cleared up not too long after we were done!) It helped that everyone had umbrellas with them anyway, and we were impressed with the dedication of all the participants, despite the drizzle.

After synchronizing their watches and downloading the mp3 from our website, at exactly 2:00 PM, everyone pressed play together. Lincoln Park was a cool location with a nice view of the Chicago skyline. The experiment was supposed to take place in “Grove #3” but the crowd decided on its own that the larger field next door would be more fun. We had to agree.

Most folks kept their umbrellas out for the majority of the experiment, putting them away only when it was in the interest of safety (during the battle, for example.) Others only took out their umbrellas when Steve, the omnipotent voice in their headphones, told them to, choosing to get wet the rest of the time. 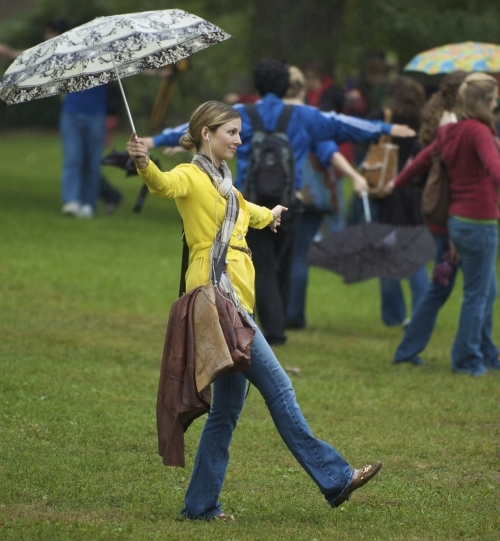 Walking test
Due to the weather, there weren’t too many other folks around the park, but the one or two who happened to be walking or jogging by got a boatload of high fives. 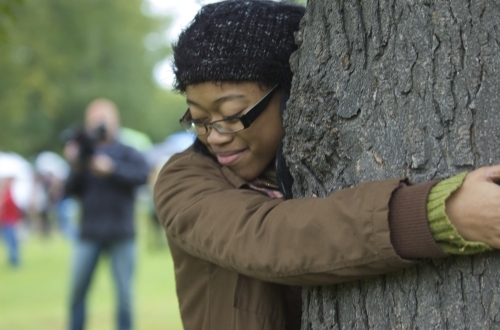 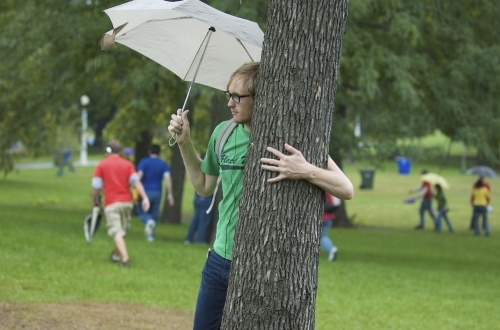 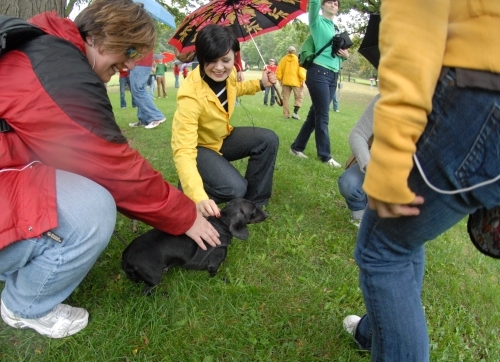 Hugging an animal
Continuing the theme of unusual characters showing up (a bear in NY, a wolf in SF, and two cowboys in Toronto,) a King graced our presence in Chicago. 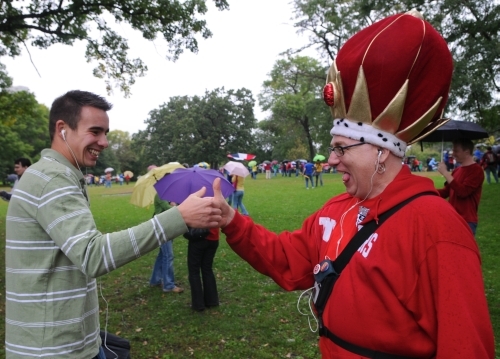 The King plays thumb war
Agent Nicholson recognized The King from one of the Mp3 Experiment New York photos (without his crown) and wrote to him via his blog to confirm he was really at both. He responded, “Yes, I was lucky to have been in NYC visiting family for that event, then even though I had been through one I could not just sit on the sidelines for Chicago’s!” That’s dedication! 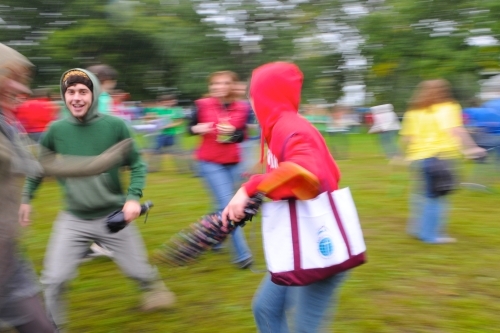 “Stop!”
There’s a section of the experiment where Steve instructs participants to walk around and then “stop” and “jump” on his command. The idea is for everyone to try to do it at the exact same moment. This of course usually failed because people were several seconds apart from each other having not perfectly synchronized their watches. For the second phase of the game, Steve stops saying “stop” and “jump” and the crowd is instructed to work together to do the actions on their own simultaneously. Although this should be harder, it was actually easier in this situation because audio synchronicity didn’t matter. It was interesting to see the crowd in each city eventually resort to cheating. In each town someone would decide to just yell “jump!” at the top of their lungs, realizing it was the easiest way to achieve the goal. It wasn’t explicitly banned by Steve, and it was a pretty clever way to solve the problem. In Chicago a jumping frenzy broke out with someone continually yelling jump to a beat. 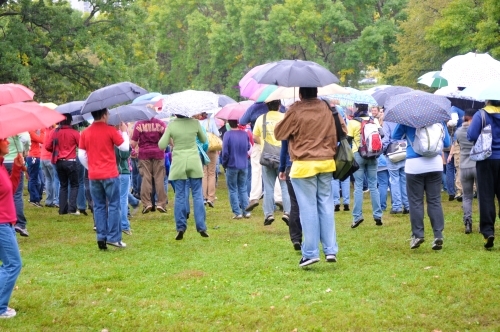 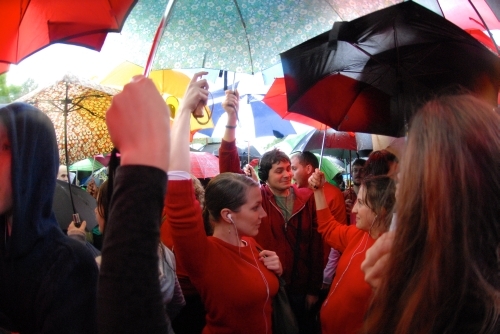 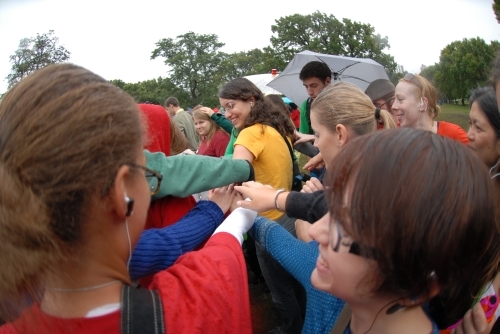 “Human Twister”
The epic battle was tons of fun in Chicago. The field wasn’t the largest one on the tour, but it was particularly long. The armies were a pretty great distance apart, and there was an awesome tree right in the middle. Agent Nicholson cleverly climbed the tree to snap photos. 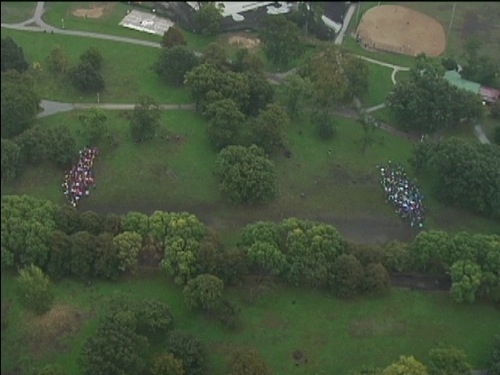 View from the helicopter above 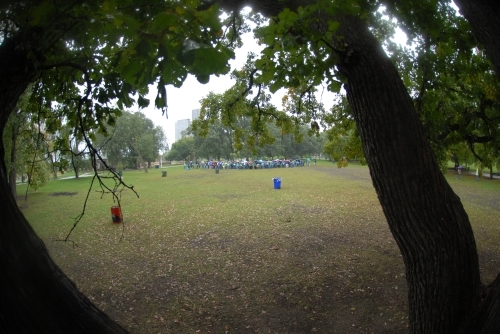 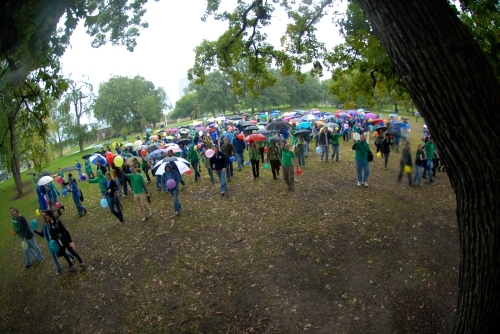 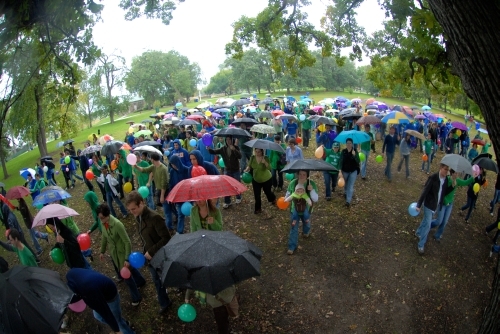 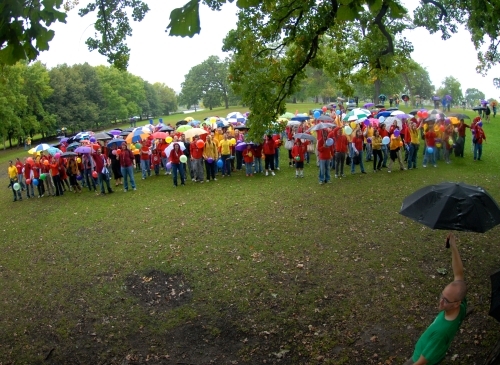 The Red/Yellow army
I put together an animated gif of the start of the battle: 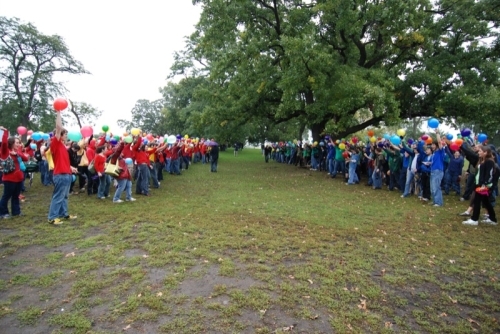 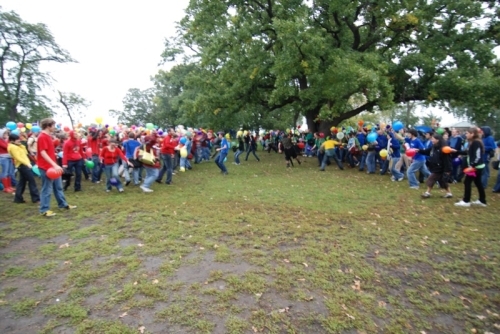 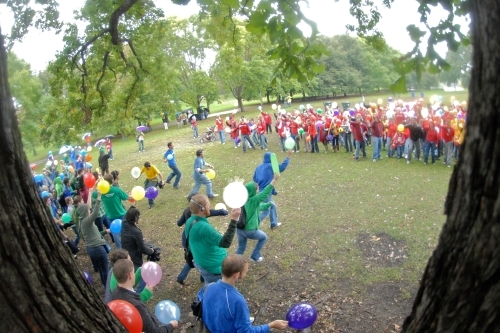 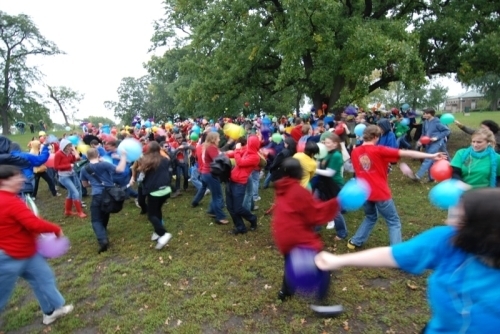 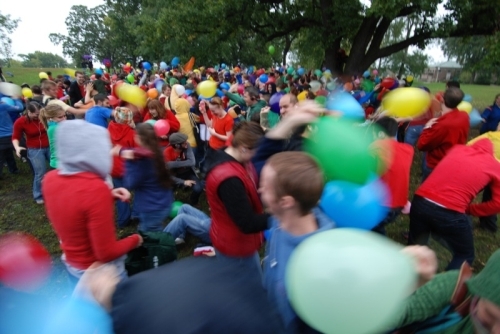 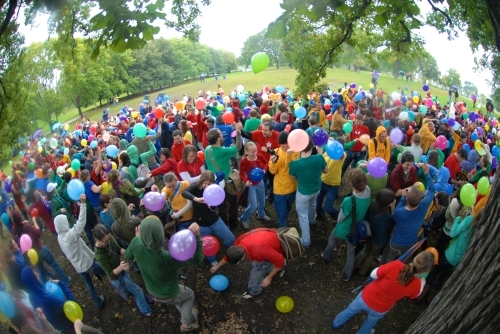 One by one, people starting dying on the battlefield. Many folks fully committed and lied on the wet ground. Others, myself included, conveniently died in a “crouched position.” 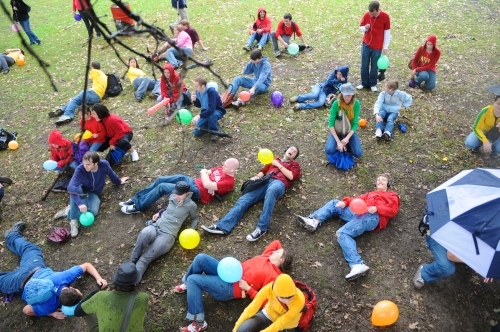 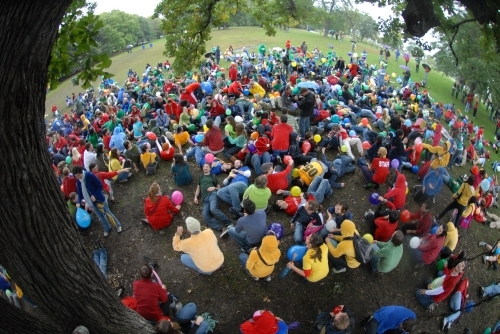 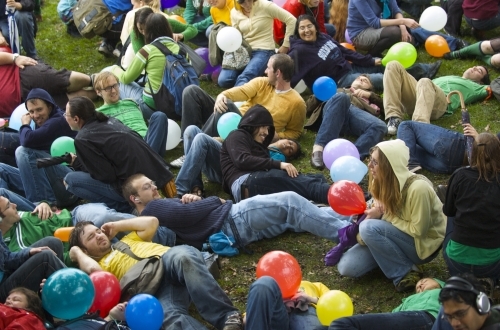 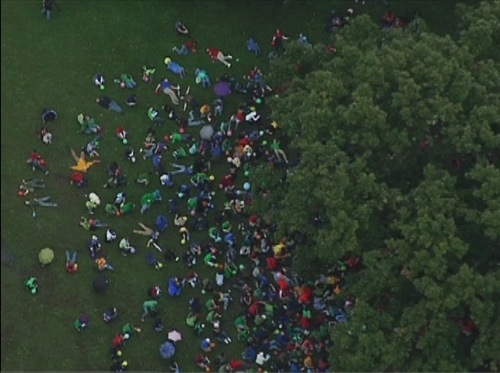 After the experiment was over, most headed home pretty quickly to dry off. A few folks didn’t want the fun to end. An impromptu game of “red rover” was organized and a nice crowd stayed and played in the rain. 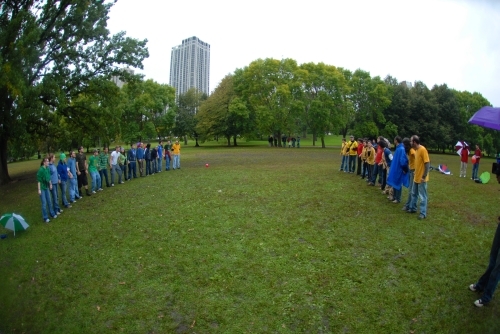 In the end, the weather made the Chicago experiment truly unique. We had a wonderful time and hope we’ll be able to come back soon.

Thanks again to Yahoo! for embracing our mission and making this tour possible. Be sure to see our reports on the other three cities:

AUDIO
You can download some of the songs from The Mp3 Experiment on Agent Walker’s MySpace page.

AGENT REPORTS
Check out first hand reports from participants and links to their own flickr sets and blog posts on Recap Page. Add your own report if you were there.

HIRE US
We have also toured The Mp3 Experiment around the world to places like Berlin, Germany and Adelaide, Australia. If you’re part of an organization (festival, university, arts group) that is interested in commissioning an Mp3 Experiment, get in touch via our contact form.