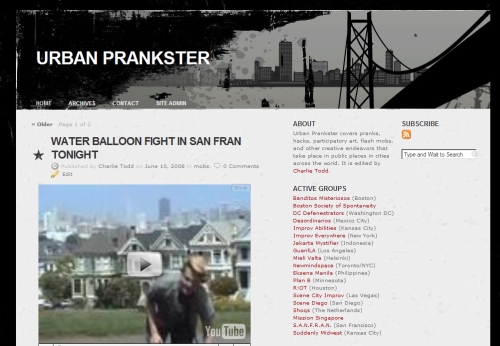 Today we’re proud to announce the launch of a new blog, Urban Prankster. Urban Prankster will feature pranks, hacks, participatory art, flash mobs, and other creative endeavors that take place in public places in cities across the world. If someone does something awesome in the public space, we plan to cover it.

Over the last six months we’ve seen a massive spread of urban creativity in cities across the world. We’ve been covering the global trend here on Improv Everywhere, focusing on groups that formed on our Improv Everywhere Global network. It’s been awesome to see groups recreating our past missions and coming up with new ideas of their own. With missions happening in other cities on an almost weekly basis, we decided it was time to create a new site to celebrate this work. ImprovEverywhere.com will return to focusing on our work here in New York, and all documentation of other groups will move to Urban Prankster.

In addition to Improv Everywhere style events, we’ll also be covering other forms of art and comedy in the public space and posting announcements about upcoming events seeking participants.

We’ve got a handful of posts already up on the site, and plan to add new content on a regular basis. So give the site a test run, and sign up for the Urban Prankster RSS feed to stay updated.