For our latest mission, three agents entered a Starbucks one by one with their own giant desktop computer and CRT monitor. They bought coffee and worked at their computers as if they were laptops. One computer even had a Wi-Fi card installed, enabling our agent to surf the web. Enjoy the videos first and then go behind the scenes with our photo report below. 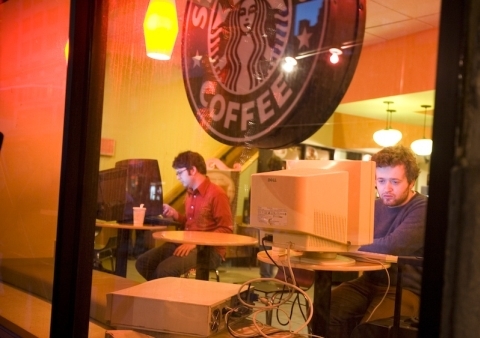 Agents Casey and Plaza approached me with this idea at the UCB Theatre office in New York. Agent Casey is the IT guy for UCB, and had access to a whole closet full of old, barely working desktop computers and CRT monitors. Naturally we needed to use these dinosaurs in a Starbucks.

We met on a Saturday afternoon at the office and dug through the graveyard of old machines trying to find the ones that would still boot. 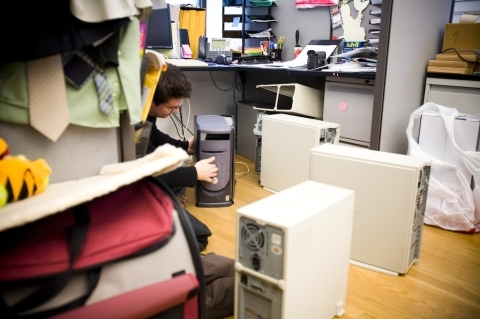 Agent Shafer works on the computers
Some of the machines were so old they were still running Windows 95. Agent Casey was able to install a Wi-Fi card in one of the slightly more modern ones. This would allow him to access the wireless network at Starbucks.

Whenever we film inside a place of business, we have to hide all of our cameras. Most places will kick you out pretty quickly if they see you filming. We had three cameras, each using different concealment methods: 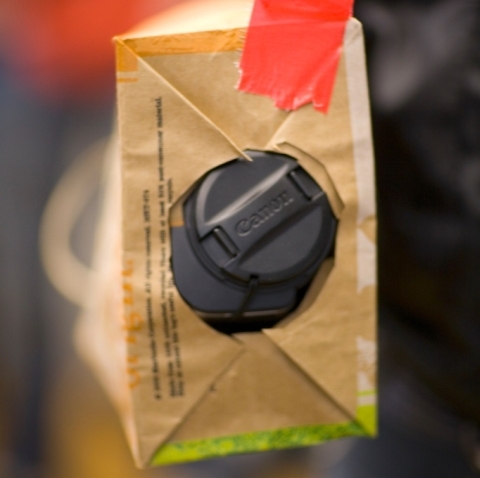 Agent Adams’ camera was hidden in a Starbucks bag 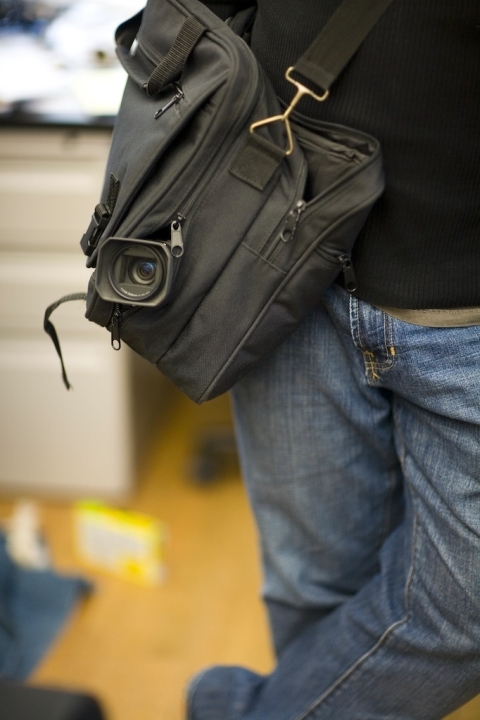 Agent Shafer’s camera was sticking out of his duffel bag 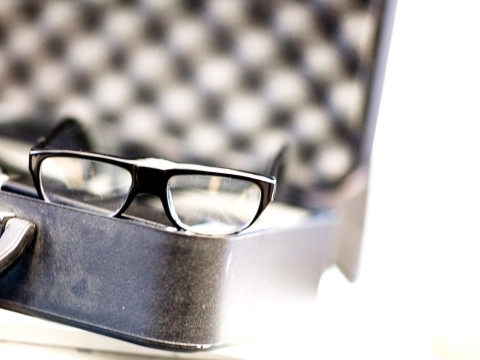 And I used the hidden camera glasses loaned to me by the UCB’s Matt Besser
We used three enormous pieces of black rolling luggage as our “laptop cases.” As large as our cases were, they still couldn’t hold the CRT monitors, so those had to be rested on top. We had all forgotten how heavy this type of equipment would be. It was no easy task getting these rigs down to Starbucks. 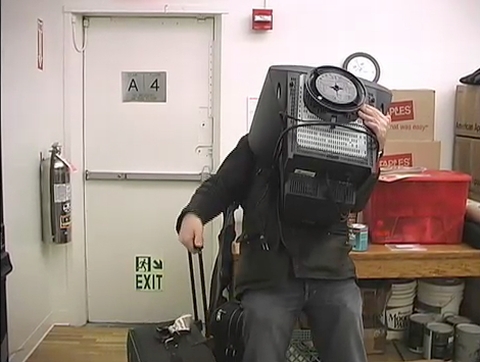 Agent Wengert struggles to get out of the building 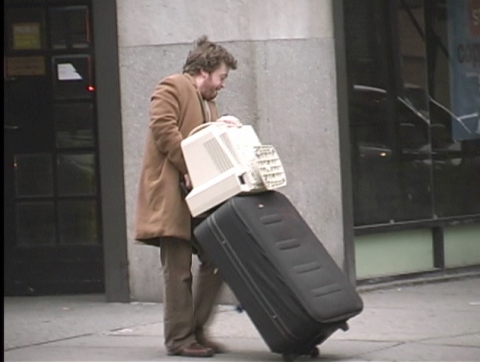 Agent Casey on 7th Avenue
We had a nice selection of Starbucks to chose from. There are about 4 within a 2-minute walking distance from the UCB office, one in every direction. We picked one that had plenty of window seats (for street filming) and an upstairs (to get the overhead camera angle.) We sent Agent Toledo and Agent Sokoler down to the Starbucks first to secure good window seats. They would reserve the seats until the computer users arrived.

The video camera agents entered next, buying a coffee and finding a good spot to covertly film. 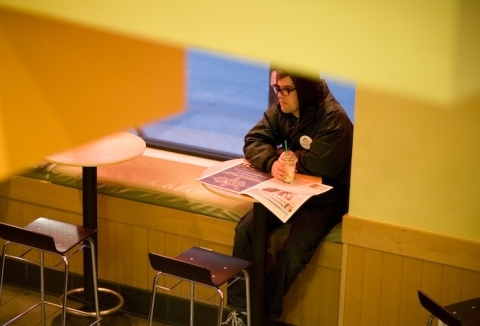 I pretended to read a paper while filming with my glasses 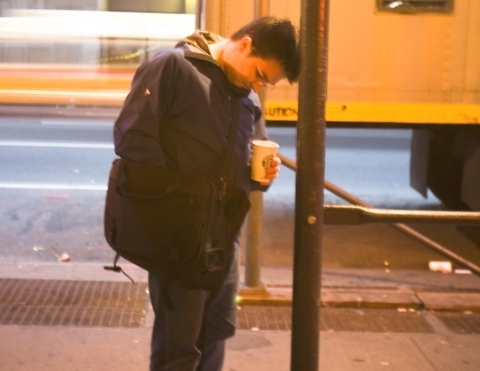 Agent Shafer films through the window
Agent Casey was the first to enter. He bought a coffee and then quietly set up his computer at a table by the window. 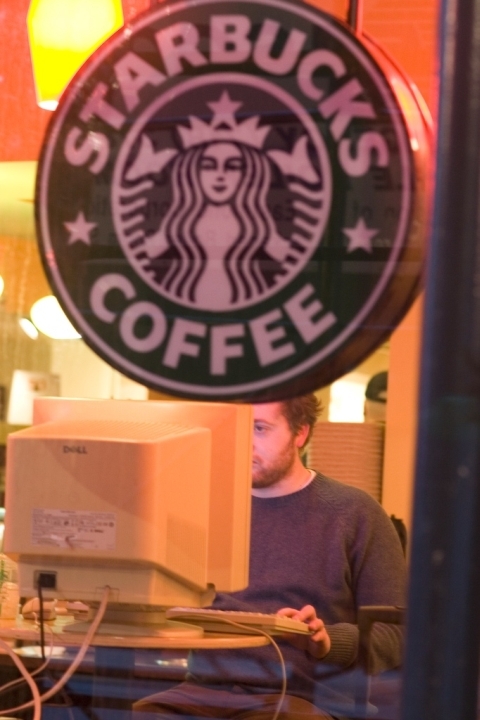 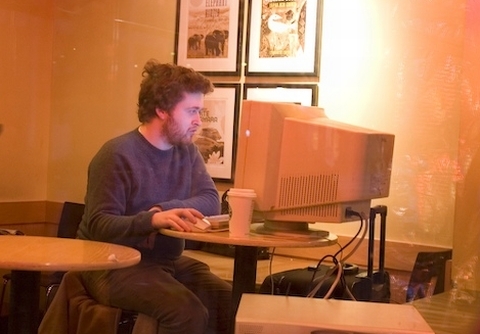 His computer had a Wi-Fi card which allowed him to get onto the wireless network. He opted not to pay for the T-Mobile access, and instead visited the only site he could browse for free, starbucks.com. 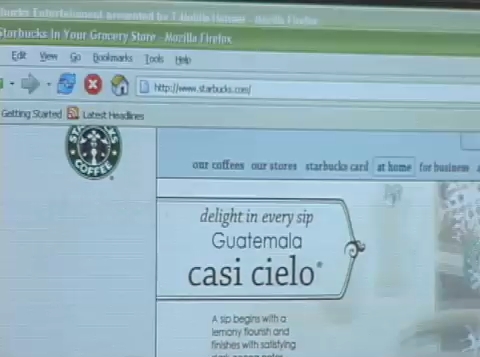 We didn’t know how people would react to the computers. The most common reaction surprised us: people assumed that they were public machines put there by Starbucks. As Agent Casey went to pick up his coffee order, a man sat down at his computer. 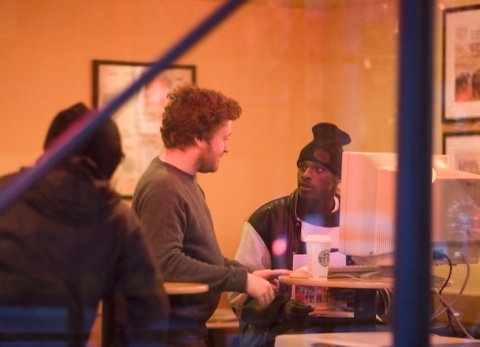 Agent Casey had to repeat, “this is mine,” several times before the guy understood what he meant. He got up, and then proceeded to ask a nearby woman if he could use her laptop. 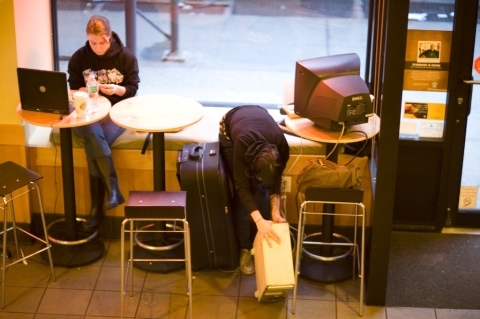 She set up right next to a girl using a laptop, which provided the perfect contrast. People in the Starbucks started really reacting after she arrived. One weirdo on a big computer was one thing, but now there’s another one? 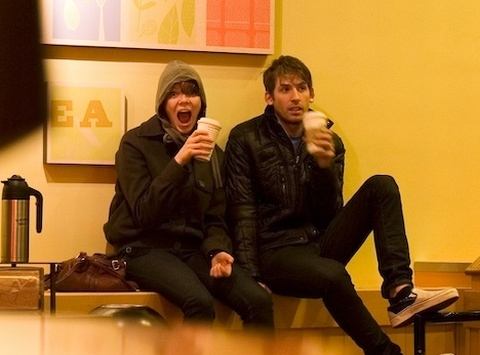 Customers react to a second desktop 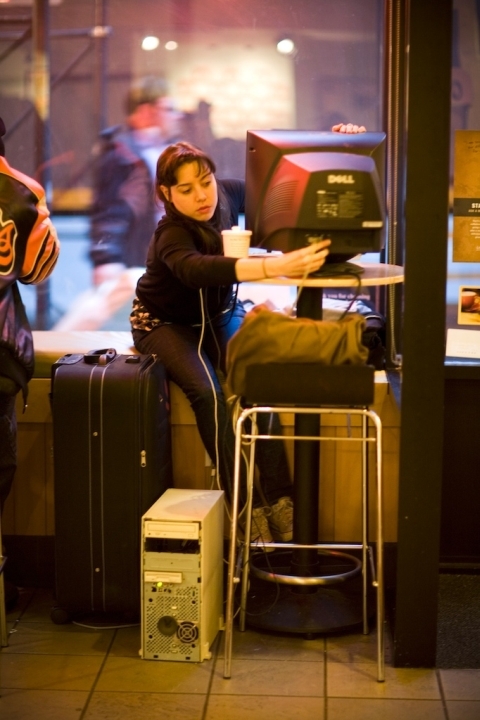 Agent Plaza had a newer monitor, but her computer was ancient. She booted up Windows 95 and got to work on Word 95. 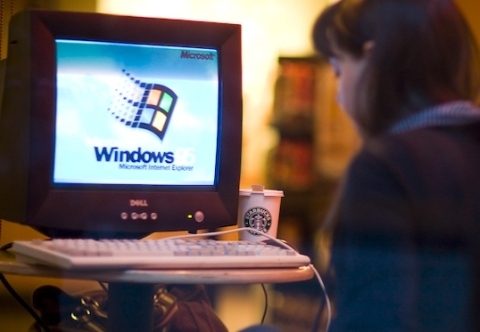 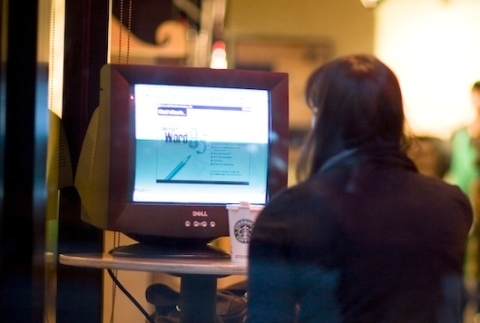 She took the joke a step further by actually putting her keyboard and monitor ON HER LAP. 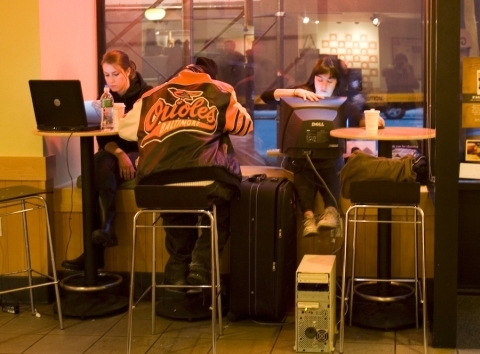 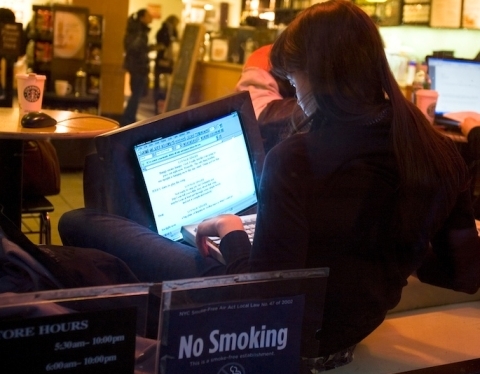 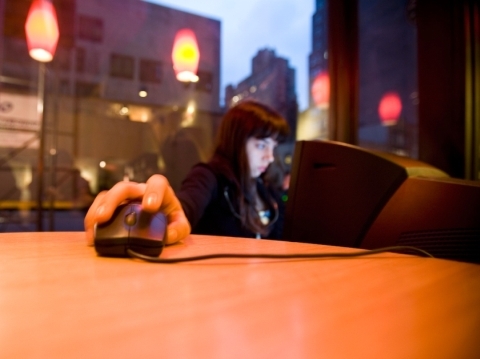 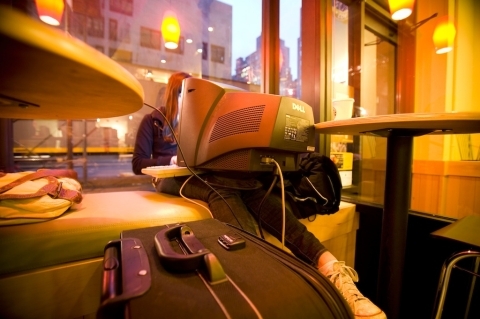 Agent Wengert was the last to enter. He found a spot by the window in between the other two agents. This created a real computer lab feel with three desktops (and one customer’s laptop) in a row. 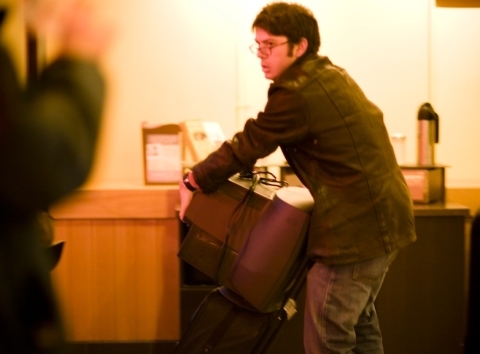 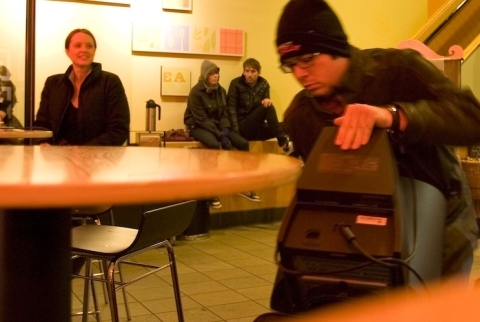 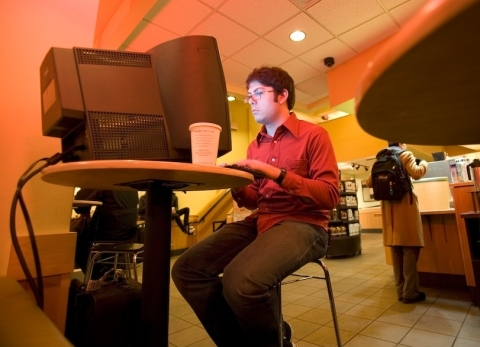 I sat facing the window for a few minutes, and it was really fun to watch the reactions of people on the street as they would walk by. You’d see them notice each computer as they passed, and by the third, everyone would do a double-take. Most people would keep on walking, but every now and then someone would stop and take a closer look.

The Starbucks staff never gave us any trouble at all. In fact, it didn’t seem like it occurred to them that the three computer users might have known each other. One employee walked by me and laughed. I asked him what was going on and he pointed at the three computer users and declared, “They mean BUSINESS.” That seemed to be the going theory, that they were just very serious about getting their work done. Our agents did seem entirely serious– everyone was excellent at keeping a straight face.

The manager told me that it must be “midterms” and that they were probably students from FIT, a college across the street. At one point the manager caught Agent Adams filming, but even then he didn’t put together that we were all part of a prank. He simply explained that, “They are paying customers and you can’t film them.” Agent Adams claimed to be a student who just happened to have a camera on him and wanted to film this unusual thing. The manager admitted, “It’s amazing. I’ve never seen it before, and I’ve been with the company for four years.” 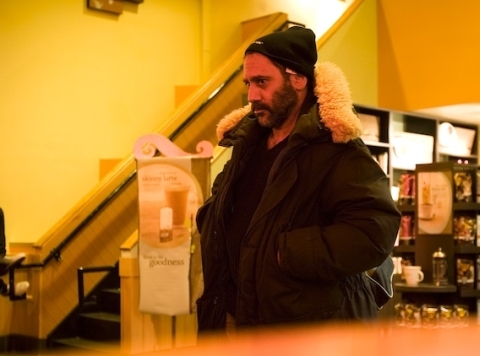 The man pictured above was in the Starbucks almost the entire time. He couldn’t believe what was going on and was eager to talk to anyone else who noticed it too. “What’s the benefit?” he kept repeating. It made no sense that anyone would go to all the trouble to bring their desktop from home. As he exited Agent Adams caught him on the street and asked him what was going on. His answer is in the main video above, but here’s a longer transcription:

“This is the most insane fucking thing I’ve ever seen. What is the benefit? What’s the most that could happen? You’re saving electricity, but that’s like minuscule. Everybody in the place is looking. Does every Starbucks do this? The strangest fucking thing I’ve ever seen. Have you seen that in another Starbucks? Is it like a new trend or what? What’s the benefit? Do you know what the benefit is? If they’ve got a computer they must have a roof over their head. They must have electricity. Strange. This is very weird man. Today is the 9th of February, the day of a new trend. Is that the strangest thing you’ve ever seen? Is that not the wildest thing? I thought maybe I was behind the times and it was like a fad, but I’m glad that this is something that you haven’t seen either. That’s the strangest thing ever. That is so strange.” 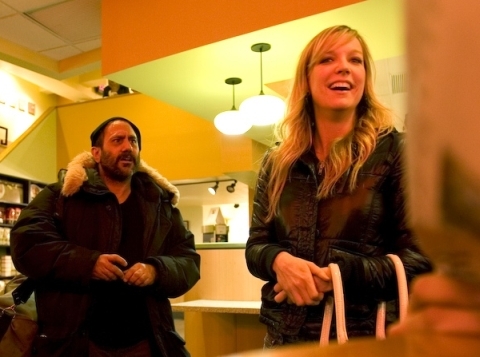 We got another great reaction from the blonde woman pictured above (with the “benefit” guy.) She entered the Starbucks and actually stood in line behind Agent Wengert waiting to use his machine. There’s no telling how long she would have waited had he not started packing up and leaving after a couple of minutes. The reaction she gives when she realizes what’s going on is priceless (you can see it in the Agent Interview video above.) She, first tries to figure out why this guy is unplugging the Starbucks public computer, and then begins laughing when she realizes it’s his personal computer she had been waiting in line for.

Our agents left the Starbucks one by one and met back up at the UCB office. Despite all the heavy lifting, we had a really fun time, and it seemed like everyone who saw us had fun as well. It’s hard to believe, but it’s been nearly five years since our last mission in a Starbucks. It was good to be back.

See these photos in their full resolution at Agent Sokoler’s Flickr Set.