Our 6th Annual No Pants Subway Ride took place on Saturday, January 13. Around 300 people participated this year, making it the largest No Pants mission ever. If you’re unfamiliar with our No Pants series, check the missions page for write-ups of the previous five installments. This year’s ride was loads of fun, and unlike last year, it went off without a hitch. We had a great group filled with all different shapes, sizes, races, and ages. 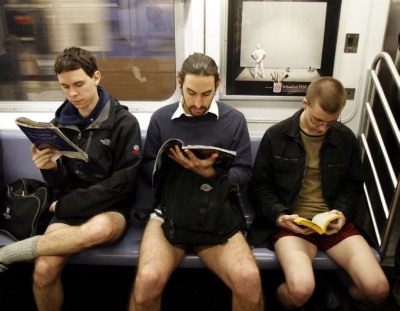 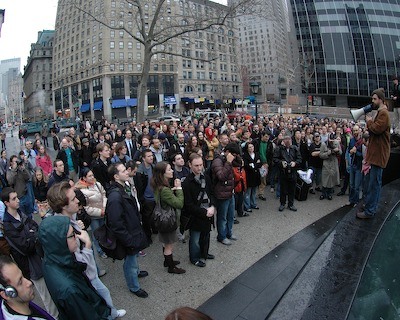 Organizing 300 participants
When I arrived at the meeting point I noticed there were three police officers lurking a couple hundred feet away from us. I figured that might happen, considering the chaos of last year, and the fact that several local papers publicized the info for this year’s event. I introduced myself to them, and they were super nice. They recognized that the cop who stopped us last year made a mistake and were only there to escort us this year and make sure everyone stayed safe. It was as if we were a parade. 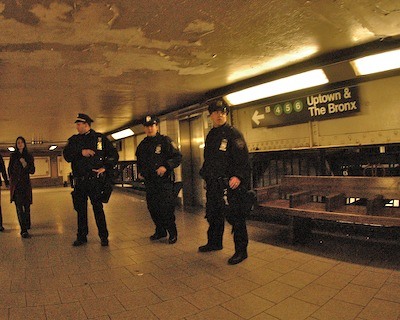 To accommodate the larger crowd this year, I made a few changes to the structure of the mission. The biggest change was doing away with the pants sellers. Always a funny punch line to the mission, it was sad to see the pants selling go, but considering how many people lost their pants last year, it just didn’t seem worth it. This year everyone brought along a backpack (or purse, briefcase, etc) and kept their own pants with them. The other major change is we actually used two separate trains. Everyone started on one train, and then stop by stop groups of participants would depants and then exit the train and wait on the platform. In previous years we’d just run down the platform to the next car, but this year we actually waited five minutes on the platform for the next train to come. Lucky for us, it was an unusually warm January day. 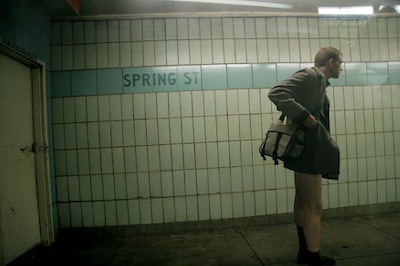 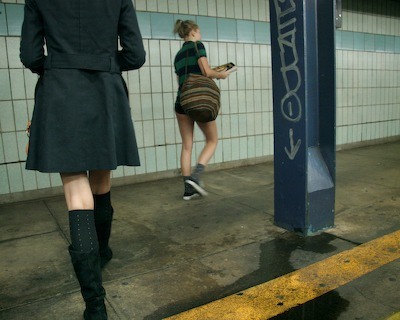 It was really cool looking out the window as the train pulled into the stations. Some stops had upwards of fifty pantless riders waiting to board. If you were seated on the train looking out the window you could only see the people on the platform from the waist up, which made for a funny reveal when the doors opened on their bare legs. There were several riders who stood out this year. We had a few businessmen: 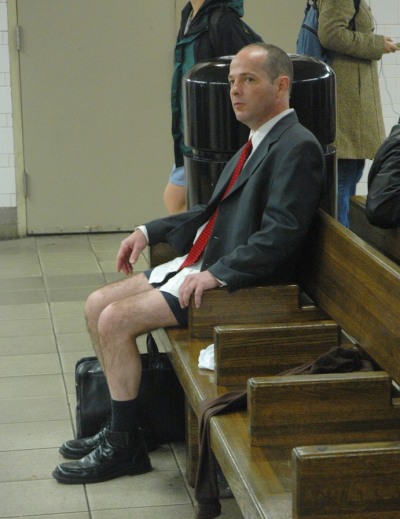 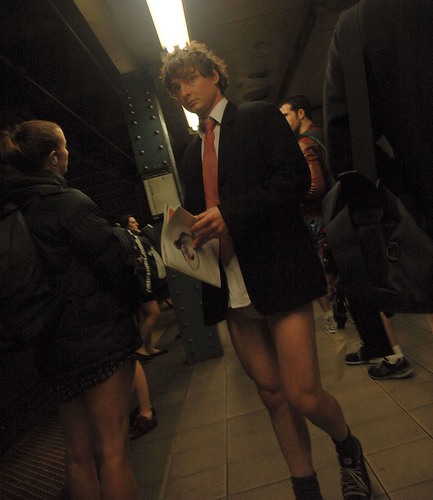 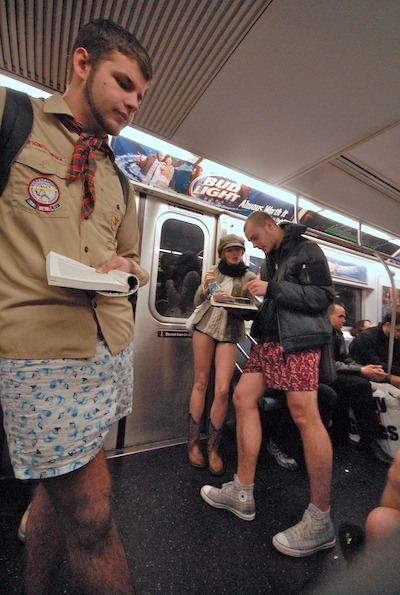 We had a Boy Scout 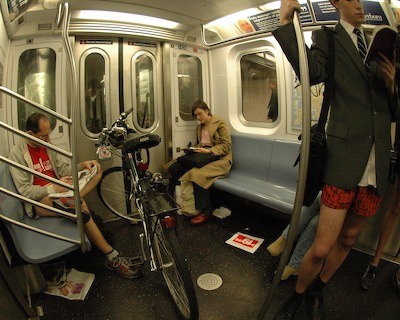 A dude with a bike 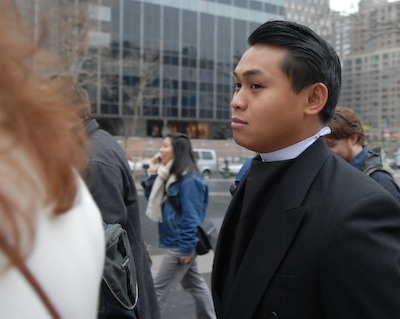 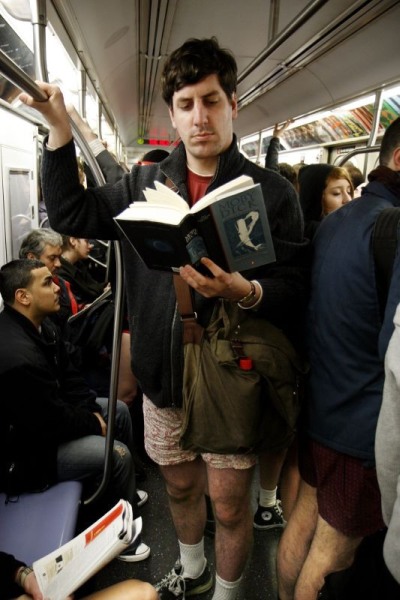 Agent Scordelis read Moby Dick
As always we got a variety of reactions from the New Yorkers we encountered. Most laughed and smiled. Some scowled. Some ignored. 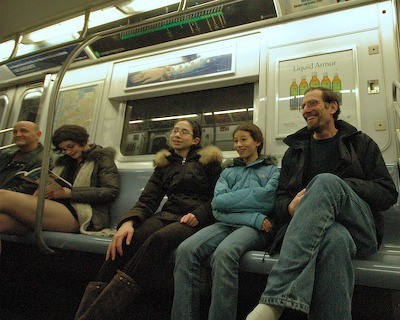 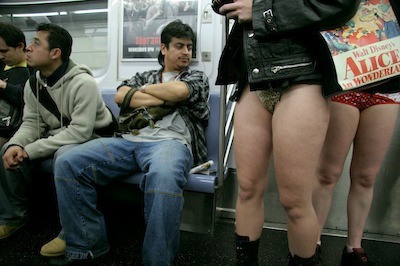 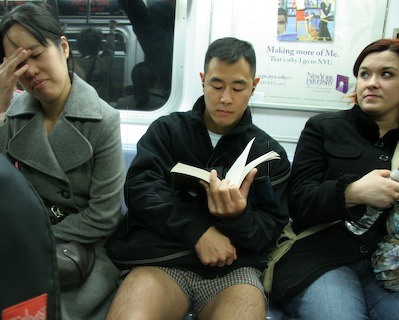 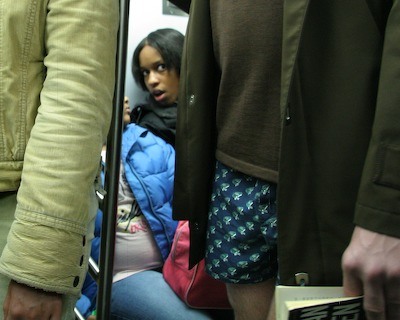 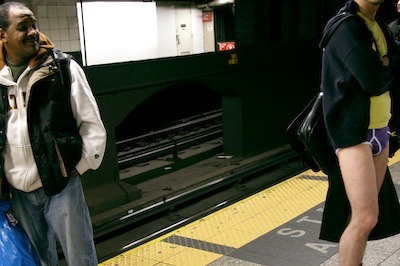 By the end, every car on the train was filled with around 30 pantless riders. 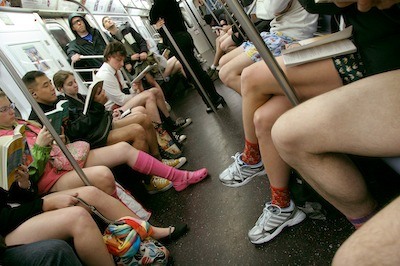 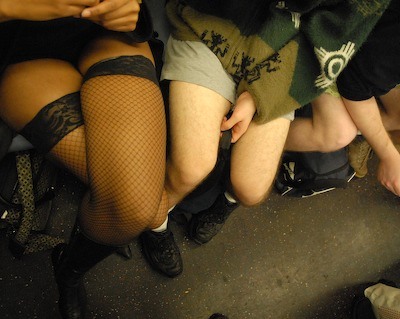 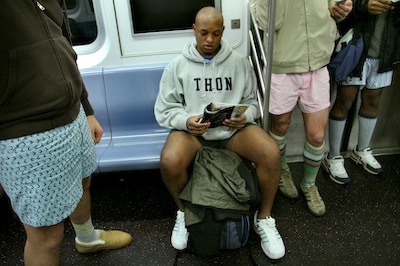 At 125th Street, everyone exited the train and moved to the downtown tracks to take the train back to our starting point. There was a drummer on the platform and as folks waited an impromptu dance party broke out. Pantless people danced to the drummer’s beat while trying (unsuccessfully) to coax him to remove his own pants. 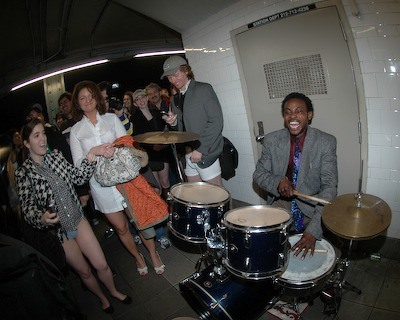 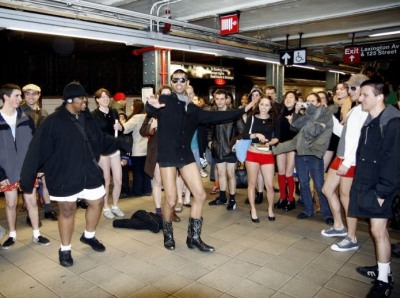 The ride back down was just as much fun. I switched cars at each stop, and it was tons of fun to see the different reactions in each of the ten cars. When we returned to our meeting point and exited the subway, most folks chose to keep their pants off. By far the warmest January in the history of No Pants, it really was quite comfortable walking around pantless outside. 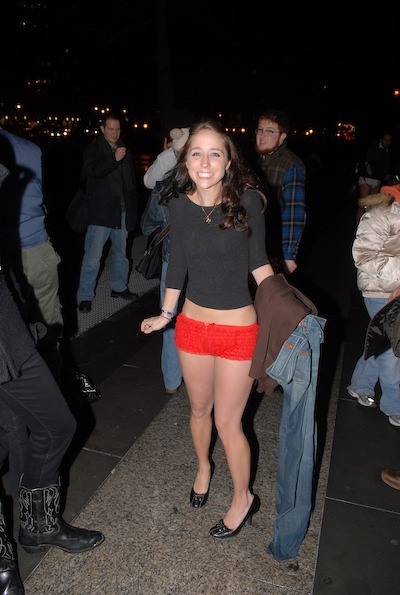 See below for a little video and links to photos and news articles. Also be sure to check out the comments section (link at bottom of page) for the individual reports of agents involved.

We don’t have too much video this year, mostly because I figured we already have enough No Pants footage from all the year’s past. Matt Besser of the Upright Citizen’s Brigade was nice enough to loan me his hidden camera eyeglasses, and we put them to use for this mission. 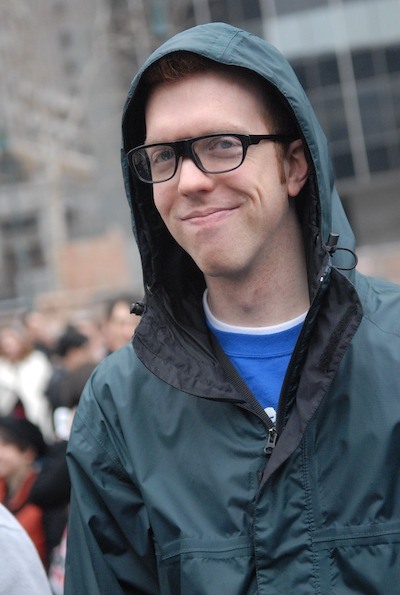 All photos on flickr tagged with No Pants 2k7 (403 photos)