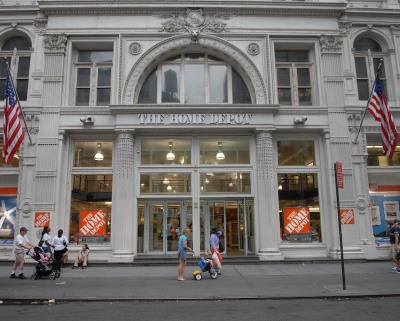 A few years back we executed a mission that involved repeating time. Ever since then I’ve wanted to try something that stopped or slowed down time. How would people react if they found themselves surrounded by people moving forward at a different rate or time (or not moving at all)? I decided the Home Depot on 23rd Street in Manhattan was the perfect place to try this out for two reasons. 1) The assonance in “Slo-Mo Home Depot” sounds funny. 2) The mere existence of a Home Depot, an enormous behemoth of a store, on our tiny island is hilarious. It also helped that the store is located on the exact same block as the Best Buy we invaded earlier this year.

On a Saturday afternoon, around 225 people showed up at the meeting point in Madison Square Park, a short walk from the Home Depot. 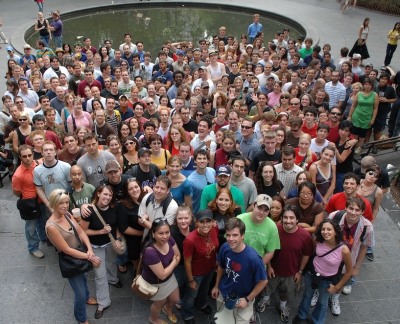 A pretty diverse group of folks showed up. One family drove down from Connecticut to participate. The wife joked that her husband looked like Tom Selleck. They were the first to arrive at the meeting point. 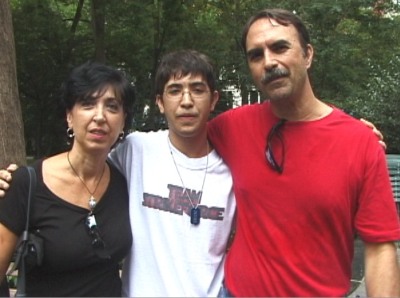 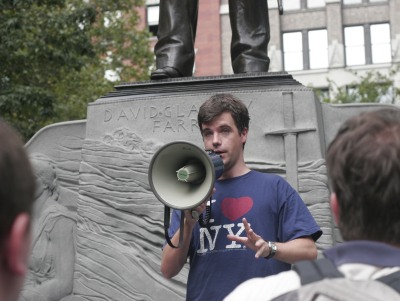 Giving instructions to the group 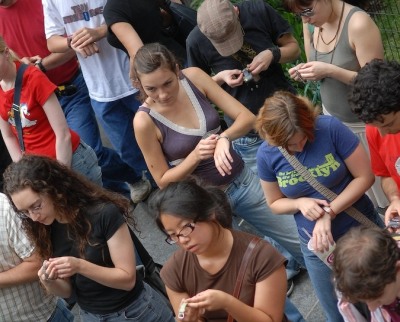 Agents synchronize watches
This particular Home Depot location has a ground level, a lower level, a balcony, and a contractor services area. I divided the group up by months of birth and spread everyone out equally among the different sections, ensuring that we’d be spread out over the entire store. I also divided the group up by year of birth, instructing the even numbered birth year folks to approach and exit the store from Sixth avenue and the odd years to approach and exit from Fifth. I did this to make us seem less like a parade of people and more like random individuals entering and exiting the store.

One thing that is unique about this mission is that the photos are pretty worthless. You can’t show movement or stillness in a photograph so we needed to capture as much video as possible without getting caught. We learned in our Best Buy mission that while corporate chain stores have security cameras monitoring you on every aisle, they don’t much care for you videotaping them. We snuck in six DV cameras and two video capable digital cameras, concealing them in duffle bags and shooting discreetly from the hip. 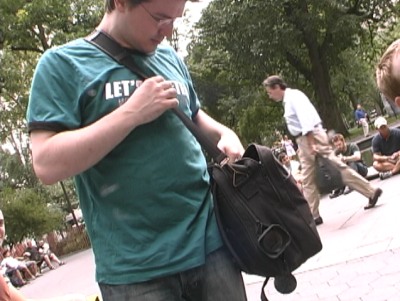 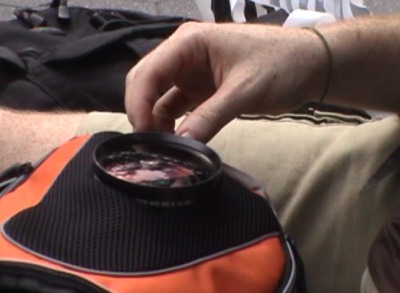 Agent Slocum preps his camera
Several of our cameramen also took advantage of the Home Depot shopping carts, which in addition to being great hiding places, also provided some nice dolly shots. Some rested their camera on top of merchandise; others hid their camera below the merchandise, capturing video through the orange cage. 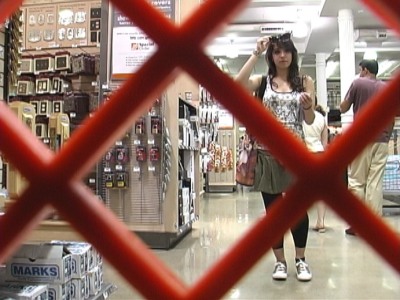 Many agents wore their watch on the inside of their wrist, to make it easier for them to discreetly check the time during the mission. 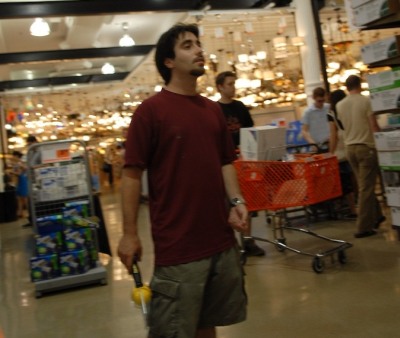 An agent moves in slow motion while Agent Gross films from inside the shopping cart behind him
One thing we had not anticipated was that most people normally shop a pretty slow pace. Because of this, the slow motion phase was very subtle; you had to look close to notice something out of the ordinary was going on. It was difficult at times to tell who was in on the mission and who was not. It was only the large gestures like picking up a product or taking a sip of a drink that were obviously unusual. 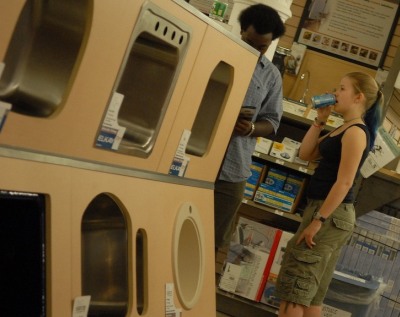 An agent slowly drinks while another slowly reads
The employees slowly started noticing that something was going on. It was particularly noticeable from the balcony, where they had a good view of the entire main level. 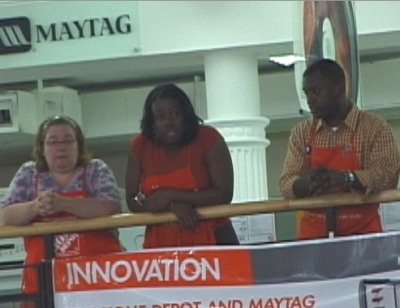 I instructed everyone to be polite and to be sure to not get in anyone’s way. While someone checking out in slow motion would surely be funny, it would also be annoying to anyone behind him in line. We stayed clear of the cash registers altogether, and also made sure not to block the escalators. If spoken to by an employee or customer, agents responded in slow motion speak (slow and low), and denied anything unusual was happening.

Freezing in place was much more impressive. In every aisle and corner of the store there were people frozen mid-shopping. Most agents were in pretty normal positions, but some got creative. 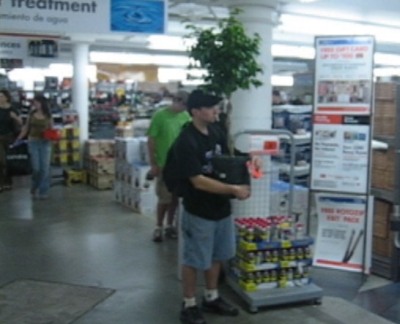 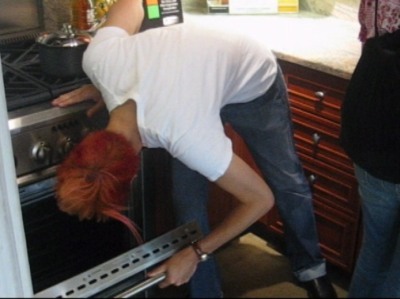 Although you can’t tell, everyone in this photo is frozen: 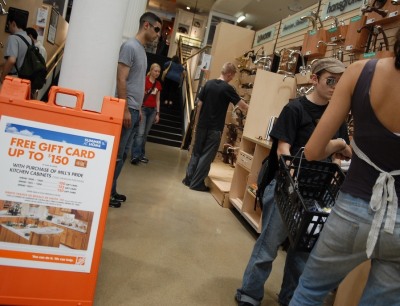 Amazingly, about thirty seconds before the freezing in place began, the Home Depot PA system started playing Jewel’s 2001 hit, “Standing Still.” Really. Several agents came up to me after the mission asking how I had gotten that song to play. I wish we were clever enough to sneak into the Home Depot back rooms and insert a CD into their stereo, but it was honestly just a freaky coincidence. I’m sure their music is piped in via some type of corporate satellite radio subscription. As soon as I heard it I ran to stand under the nearest speaker and record the audio using the video mode on my digital camera. You’ll notice an employee asks me if I need help right at the beginning of the clip.

My favorite part of this mission was the exact moment that the freezing stopped. As I was walking around covertly shooting video, I hadn’t noticed how quiet the store had gotten. Over 200 customers were dead silent. When the five minutes ended, everyone instantly sprang to life and began talking to their shopping companions. For a moment, it was as if the world was moving in fast forward.

To truly appreciate how all of our agents were operating at a slower pace than everyone else, I put together a series of clips that play at five times the normal rate. You’ll see that we appear to be behaving normally as the rest of the world whizzes by.

The employee reaction was really great. Typically when we attempt missions in retail stores the customers and lower-level employees laugh and enjoy themselves while the management becomes angry. I’m not sure if it was due to our brevity (we were in and out in a mere fifteen minutes) or if the Home Depot management is more laid-back than other stores, but no action was taken towards us at all. Most employees either laughed or thought they were going “crazy,” or both. 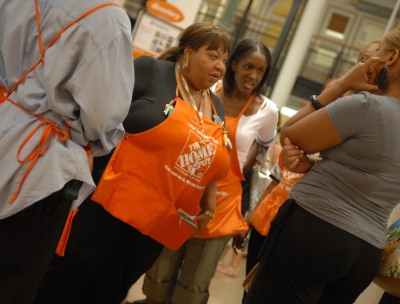 A group of employees trying to figure it out 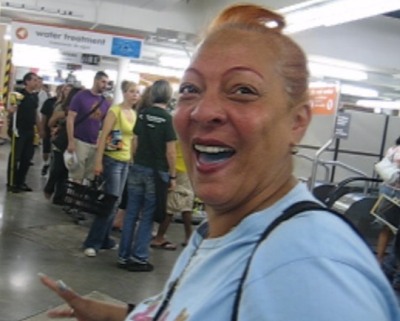 A customer who asked me with a smile, “What is wrong with everyone?” 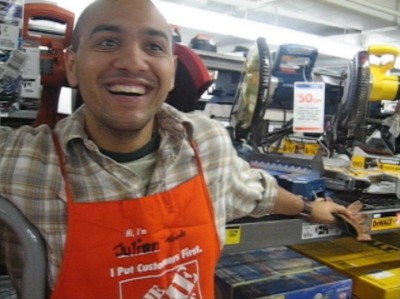 Julian smiles as he tells me what happened 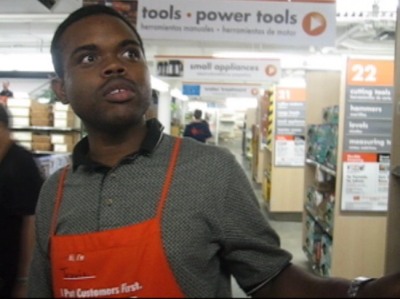 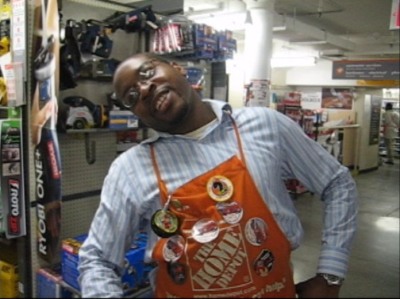 Employee demonstrates a pose of a frozen customer 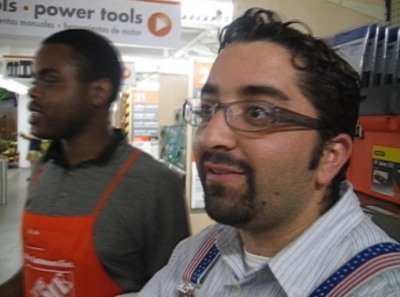 Employee who was upset that it all took place on his lunch break
I stuck around after most of the agents had left to get reactions from the staff. I shot video with a small Cannon digital camera, claiming I was just a regular customer trying to figure out what was going on. I think the fact that I had a small still camera in my hand and not a big video camera, made my story seem more believable. I shot somewhat discreetly, but the employees realized I had a camera in my hand. Here’s an unedited 2-minute clip of my encounter.

There was one employee who was unfazed by our antics. His co-worker labeled him as a “curmudgeon.”

After the mission was over we met back at the park and interviewed agents who had had particularly interesting experiences.

For the reports of many more participants, read the comments section at the bottom of this page. You can see more photos (in larger resolution) of this mission at Flickr.