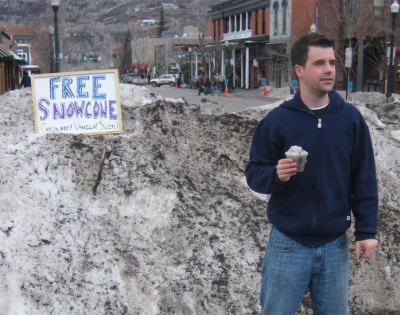 Every year comedy bigwigs gather in Aspen, Colorado for HBO’s US Comedy Arts Festival. Organizers curate a lineup of some of the best comedy in the country and industry types flock to Aspen to see what’s hot. This year, I was lucky enough to be invited to attend. In addition to being a part of a stage show where I presented videos of classic Improv Everywhere missions, I was given the task of causing new scenes on the streets of Aspen during the festival. Agent Kula was brought along to collaborate, and a few other IE Agents and friends were also in town for the festival and able to aid the cause.

On our first night in town, Agent Kula and I noticed several masses of dirty snow in the downtown area. It was a pretty disgusting site, and we figured we should do our part to get rid of it. The next morning we purchased a whiteboard and a large supply of plastic cups. 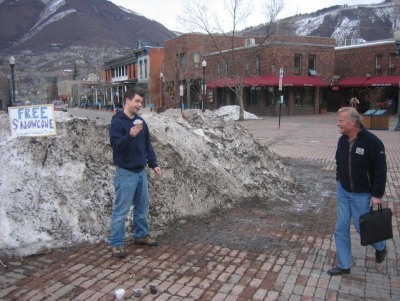 Within minutes, our “Free Snowcones” promotion was underway. I served as the sole salesperson and barker, announcing, “Free Snowcones made of 100% pure Aspen snow! Tastes just like the mountains!” We had three flavors for sale: Vanilla, Chocolate, and Swirl. 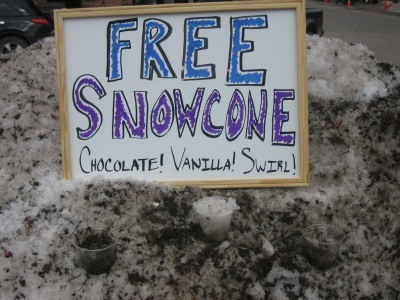 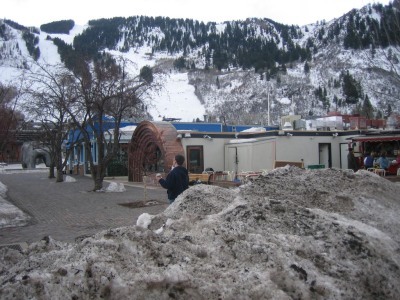 Most folks politely declined our free offer. Some claimed to be on diets. Others informed us our product wasn’t “edible”. A couple of people wanted to know if we had “lemon” flavor to which I responded, “Sure thing! Just give me some privacy, and I’ll have it ready right away.” 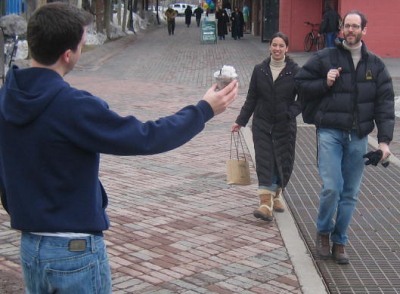 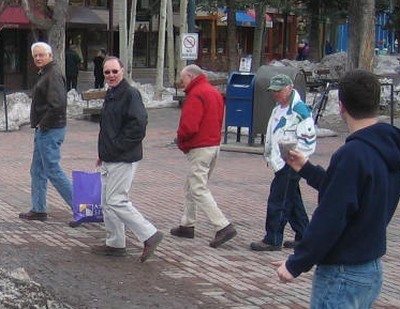 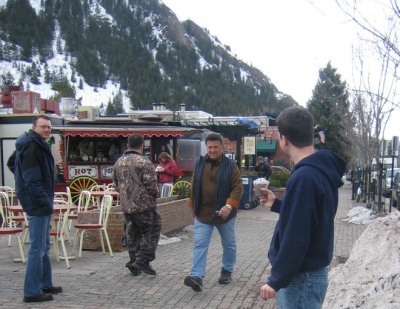 Believe it or not, we actually had a few sales. A couple of customers even took bites of our snowcones.

The following day we executed mission #2. The US Comedy Arts Festival is presented by HBO, so we decided it was time for Showtime to get in on the action. Right in front of the HBO Festival headquarters (The St. Regis Hotel), we set up the “Showtime Humor Festival”. 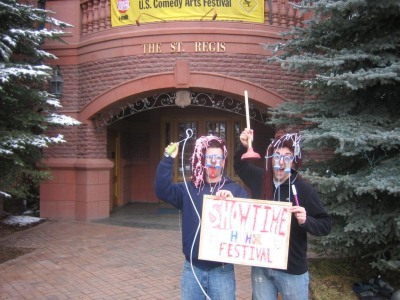 Agent King and I purchased two ridiculous “horse wigs” and using the hackiest props we could find, hosted the festival as the famous “Horsey Brothers”. We loudly proclaimed, “There is another festival in town this week! We may not have an ‘indoor’ venue, but we are just as funny as everyone else!” The Horsies’ routine included a plunger, googley eyes, silly string, a slide whistle, and of course the classic “snake in a can of peanuts” gag. The brothers performed pun-filled crowd work as the HBO festival attendees walked by. The Horsey Brothers found no shame in literally begging executives for a TV development deal, but they came up empty handed. 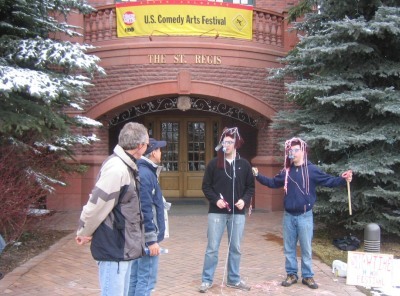 Later in the day we were joined by a real HBO camera crew as we set up a red carpet in front of the only fast food establishment in Aspen, McDonald’s. The festival included a number of real celebrities (Dave Chapelle, Vince Vaughn, Gary Shandling, Arli$$) so we figured it was time to meet a few. As local teenagers came in and out of the McDonald’s door, I flagged them down for an exclusive red carpet interview. 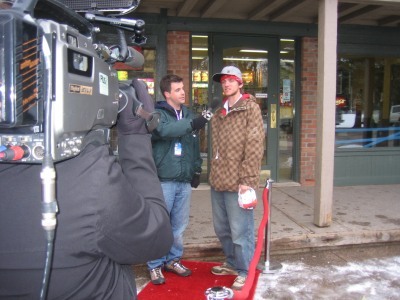 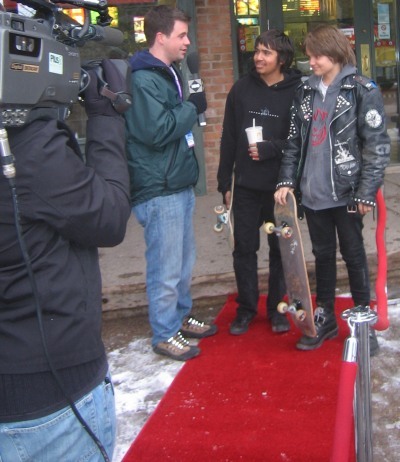 I asked the McDonald’s customers all of the burning questions the “live” audience on HBO was dying to hear: “Who are you wearing?” and “What are you eating?” 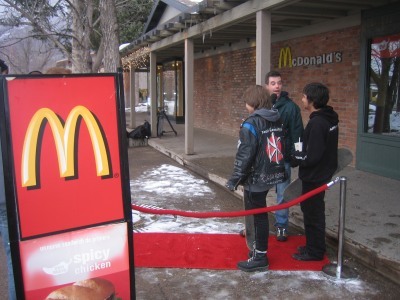 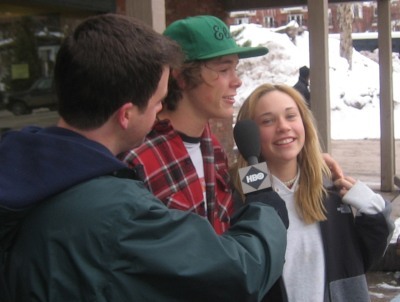 Our final mission of the festival took place right at the foot of Aspen Mountain. 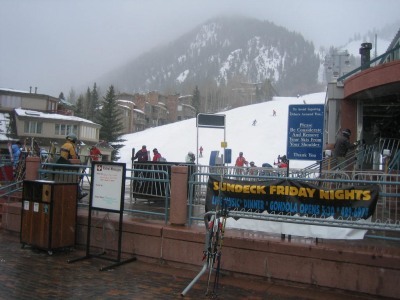 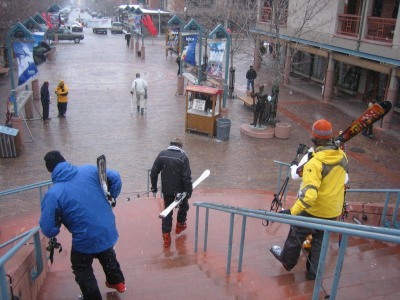 Just down the stairs from where the skiers finished their trek, we found an abandoned beverage kiosk. Agent Dunn set up shop and offered Aspen residents a much-needed service. 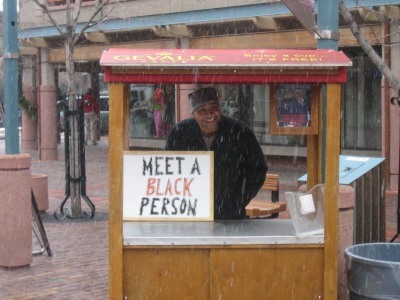 Aspen is 0.44% Black, so we figured we’d give everyone a chance to meet and greet with a real live black person. As skiers exited the mountain, Agent Dunn shouted, “What’s up everyone, I’m a black person.” 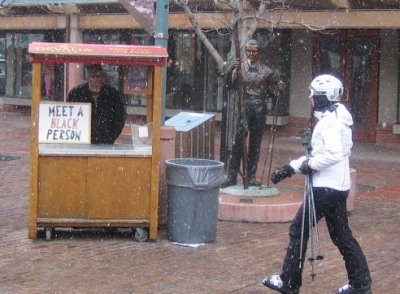 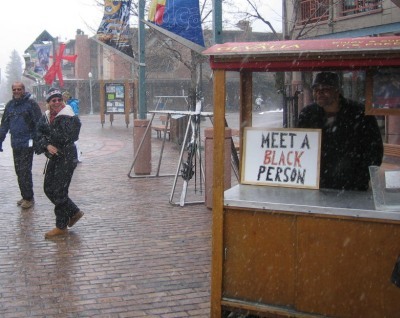 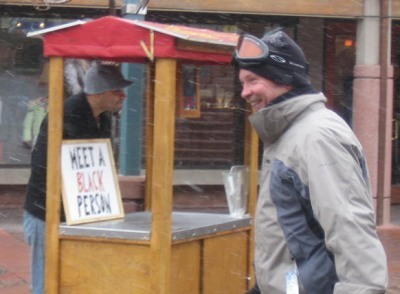 Many folks just laughed and kept walking, but others wanted to take photos of this rare opportunity. 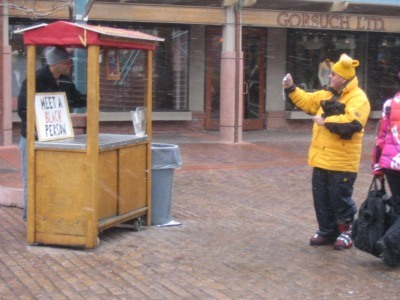 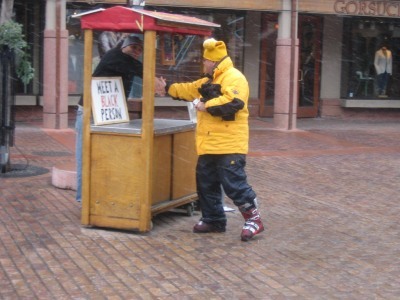 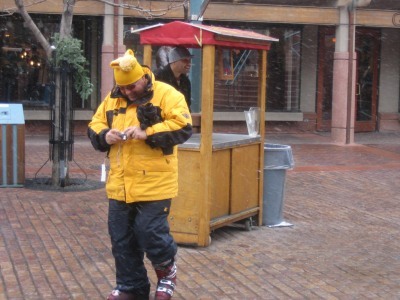 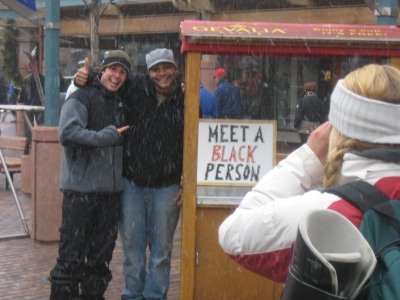 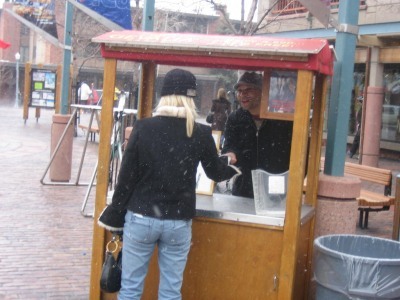 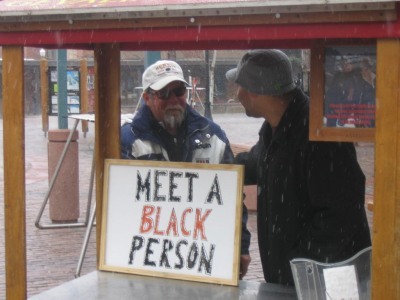 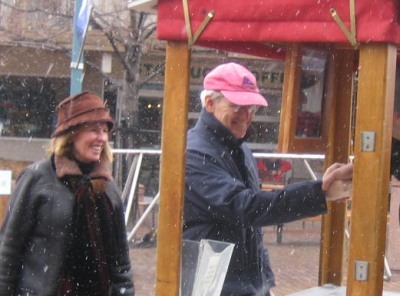 The woman photographed below felt a special kindred spirit with Agent Dunn. She told him, “From a Norwegian to a Black, I’ll tell you, we’re about as ostracized as any two groups can be.” I’m not too familiar with plight of the Norwegian Americans, but I can imagine it’s pretty rough. 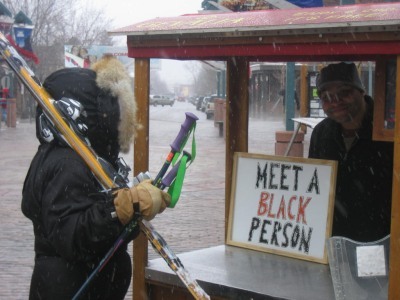 The man in the photo below had some kind words as well, “Congratulations for coming here and breaking the color barrier.” 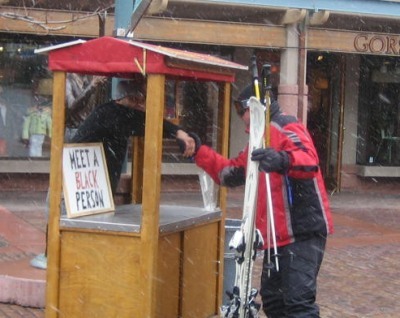 Some other memorable quotes: 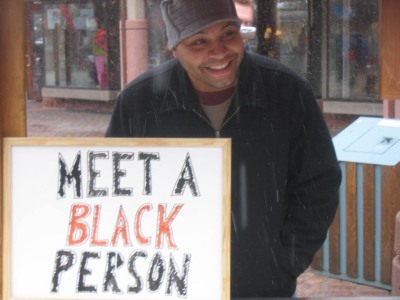