“Normal Bob Smith” is the webmaster of the cleverly satanic site normalbobsmith.com. Among other things, he sells Jesus refridgerator magnets that allow the consumer to put a variety of silly clothing on a crucified Christ. Bob recently found our site and discovered he had been duped by our Anton Chekov imposter. He posted an account of the day on his site, and we’re reposting it here for your reading enjoyment.

(Note: The above photo was taken by “Skater Bob”, Normal Bob Smith’s sidekick.)

Okay, I admit it. I’m an illiterate tool who knows nothing about Anton Chekov, or any Russian playwrights for that matter. I only kinda recognized the name, and when Skater Bob and I saw “him” at Union Square I tried to act like a big shot pretending I was familiar with him. How was I supposed to know that he died a hundred years ago? And besides, I was just tryin’ to get him to pose with my magnets because I thought it’d be a neat thing to do. I didn’t even buy a book for Chrise-sake, well, Bob did, but whatever. He said it wasn’t a very good, and that’d make sense since it was all a big hoax. And for the record I didn’t give him a set of magnets, I think. 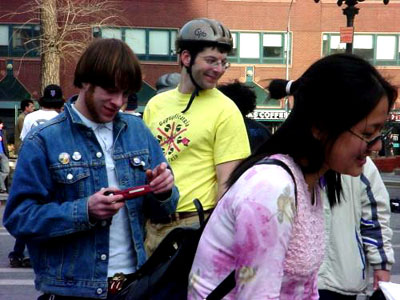 Skater Bob
Still, he was a fucking charming bastard with a strong presence, especially for a dupe. If I’da known what they were up to I’d’ve easily given them a free set. The fact that they got him up and speaking at Barnes & Noble; priceless. That’s the true victory. Not fooling some Christ-hating web master and his sidekick at Union Square. You see, I’d just met John Waters like a week earlier and I figured I was on some kind of roll or something! “sigh” They should be ashamed, clever swines. 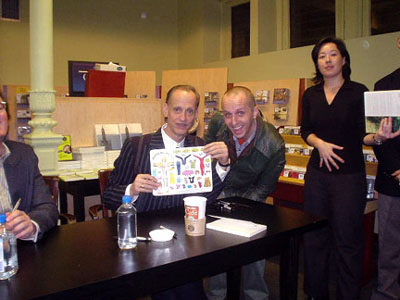 Me with the real John Waters, I swear!
So we, Skater Bob and I, were sitting there at Union Square and they had this table set up with posters and a line of people and everything! I saw a sign that said “Meet Anton Chekov author of The Cherry Orchard” or something to that extent, and kinda sarcastically I pointed to it and said to Bob, “Hey, that’s Anton chekov” like I was well read in Russian plays, and Bob said, “Go get your picture taken with him!”

I never posted the pic we took mainly because I didn’t know who the hell he was, and I suspected no one else would either. And I didn’t find out that I’d been duped until this morning in my Yahoo Group from someone who’d run accross the page.

I promise you that I’ll never fall for something like this again, unless of course it’s someone really big like Christopher Reeves, Kurt Cobain or George Washington or somethin’. Now that’d be awesome!!

* * * * * *
Next contest, draw me being completely fooled posing with somebody obviously dead trying to promote my magnets. Whoever makes me look like the biggest tool gets to suck my big fat dick. Ready? Go!

Here, I’ll get you started. 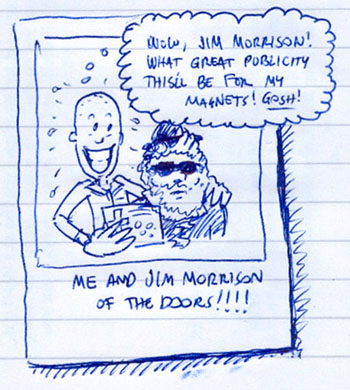