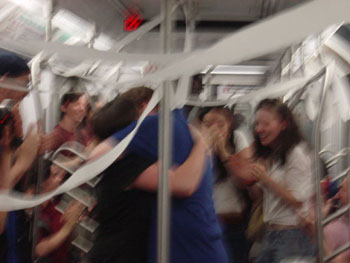 Using the same setup as Surprise!, IE Agents staged a marriage proposal on the subway during the afternoon of June 9, 2002. 11 agents met up at the Union Square Barnes & Noble (AKA the IE Command Center) and headed over to the 2 train. The group bypassed their usual underground stage, the 6 train, due to rumored massive Puerto Rican Day crowds. Real life husband and wife Agents DMartin and JMartin were set to play an unmarried couple who met each other on the 2 train two years ago. 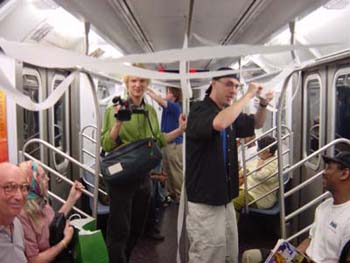 Agent Butler films as Agent White decorates
The agents rode the 2 down to the Chambers stop, crossed the platform, and then boarded an uptown train. DMartin entered the last car with a handful of his close friends as JMartin entered an adjacent car with two friends of her own. The plan was to have JMartin exit her car and enter her “boyfriend’s” car at the 18th street stop. DMartin’s friends helped him decorate the train with white streamers while he announced his plans to the train, “I met my girlfriend here on this train two years ago, and this afternoon I’m going to ask her to marry me.” The strangers on the train erupted into applause. 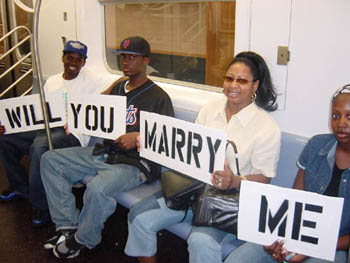 Strangers pose with their signs.
Agent White passed out four signs (“WILL”, “YOU”, “MARRY”, and “ME”) to a group of four strangers. One of the strangers, pictured above in the Mets cap, was a bit reluctant to get involved at first, but eventually got excited about his role. 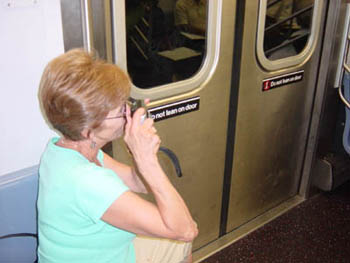 A woman readies to snap a photo of the proposal
The plan was set. After JMartin entered the train at 18th street, DMartin would give the four volunteers a hand signal to raise the signs up. DMartin’s friends completed their decorating and continued filling in new passengers as to what was about to occur. 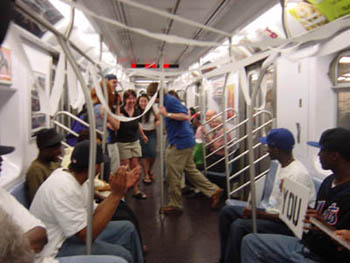 JMartin sees the signs
At 18th street Agent JMartin entered the train with her two girlfriends, agents Sklaren and Amigone. DMartin gave the signal, the signs were raised by the volunteers, and JMartin screamed with joy! DMartin got down on one knee, produced a diamond ring, and proposed. She said yes. The train once again erupted into applause and cheers. 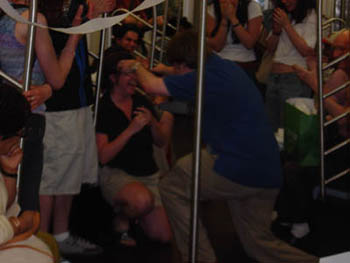 Jmartin and DMartin hug as the crowd cheers.
After the initial shock or the proposal subsided, the couple went around the train to thank everyone who had helped out, and to accept congratulations from friends and strangers. 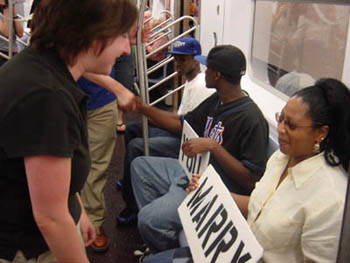 JMartin gives thanks
JMartin recalls her encounter with the woman above, “She made me lean down and whispered to me that DMartin had been so nervous while decorating the car that his hands were shaking and he couldn’t even tape up the streamers, and isn’t that the sweetest thing I’ve ever heard that he was so nervous to ask me to marry him?” 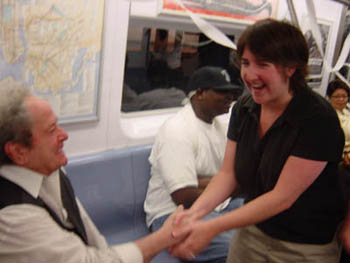 JMartin accepts congratulations from a stranger 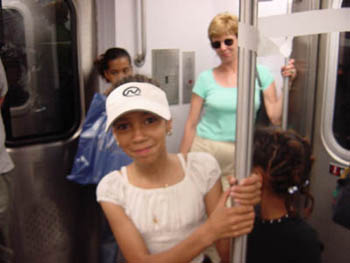 Strangers watching the newly engaged couple
Following the proposal, a brief reception was held with light refreshments. DMartin opened up a bag of Vienna Fingers cookies and grape juice for everyone to enjoy. 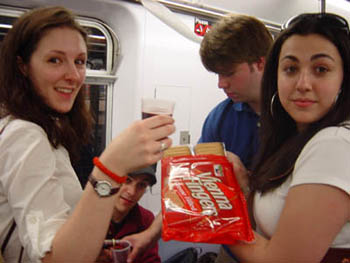 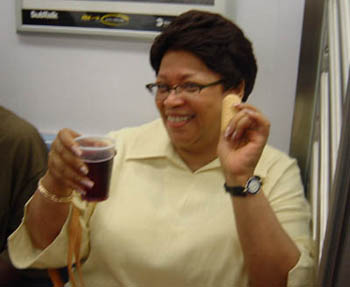 A stranger shows off her refreshments 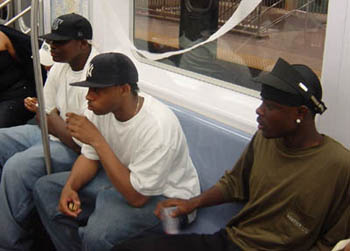 More strangers at the reception
The agents cleaned up the train, said their good-byes to all of their new friends, and exited somewhere on the upper west side. They then headed to the downtown track, and repeated the mission, this time on the 1 train. 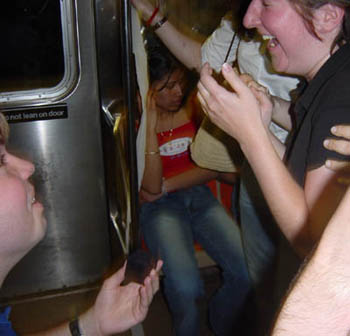 The proposal on the 1 train 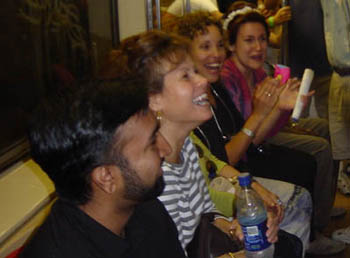 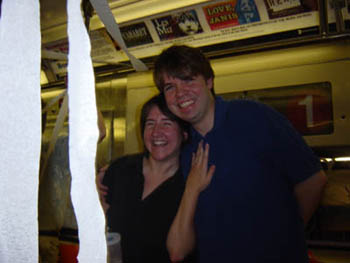 DMartin: “On the second train there was the middle-aged couple, with the curmudgeon husband. He was skeptical and told me that he had been through marriage a few times already. ‘Good luck, you’re gonna need it.’ After JMartin accepted the proposal and they were leaving he said ‘congratulations’ he seemed to warm up a little bit.

Also on 2nd train, there were four older women who just had the best time. One of the ladies told me that she wanted to marry me, ‘can I have you?’ she asked. The others said I was so romantic for doing this, that we should contact the MTA and set-up events on the subway for people. ‘I wish my husband would do something like this for me,’ one of the ladies said.”

Stranger: “She certainly has a romantic boyfriend.”
Amigone: “He’s wonderful.”
Stranger: “I want to marry him.”

Butler: “A middle-aged woman turned to her husband and said, ‘Honey, you never did anything like this for me.'”

Sklaren: “There was a couple on the train, a German and a Texan, who had met on a bus in England and had been married for six months. A woman who had gotten married the previous day kept insisting that we call the MTA PR department…she insisted that our bride and groom could end up on the cover of the Daily News.”

Todd: “The noise we created was unbelievable. Agent White and I played uninvolved bystanders for the second proposal, so we were able to sit back and truly listen. It was so exciting to witness a train erupt into deafening cheers of joy.

On the first train, I was totally taken off-guard by JMartin’s reaction. Upon seeing the signs she screamed at the top of her lungs. It was so nice to have a real married couple for this mission; their reactions were just so real.”

JMartin: “Demblowski made his ‘best man’ toast, then afterward apologized, ‘sorry man that was all I could think of, I was so nervous man,’ and the women on the train were like ‘No no that was so SWEEEEEEEEEEET!’

It was also so sweet that many of our own IE party were getting teary eyed at all this too, even though they knew it was just staged.

Another excellent day of organized fun.