Improv Everywhere once again made its mark on the UNC Chapel Hill campus. Agents posed as members of the new fraternity Omega Omega Omega (or as the brothers call it, “Tri-Om”). The agents claimed to be suite mates in the (historically Freshman) Morrison Dorm who didn’t really fit in with the established fraternities and were trying to start their own. In order to recruit more members (Tri-Om only has 8 brothers so far), they set up a table in the south quad and gave out free mixed drinks to attract potential rushees and promote their famous “suite parties”. 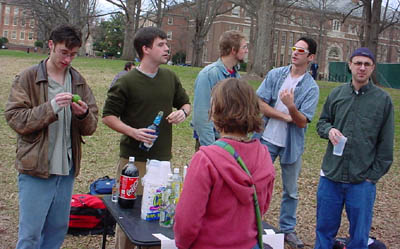 The Tri-Oms start the party
The IE agents decorated the Tri-Om table with 2 bottles of vodka, a bottle of rum, a bottle of Blue Curacao, mixers (several bottles of tonic water and coke), limes, a cooler full of ice, and plastic cups. The liquor bottles were filled with water (water and blue food coloring in the case of the Blue Curacao).

The Tri-Oms mixed themselves drinks and began approaching those walking through the quad. “Hey guys, we’re giving out free mixed drinks to promote our new fraternity.” The Tri-Oms encouraged those making mix drinks to sign their mailing list so they can be invited to future “rush” functions. 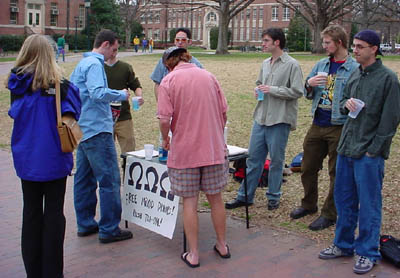 Potential brothers mix drinks
An astounding number of students approached the table and helped themselves to mixed drinks as if it was a completely normal situation. Others questioned the legality of the drinks before making their own: 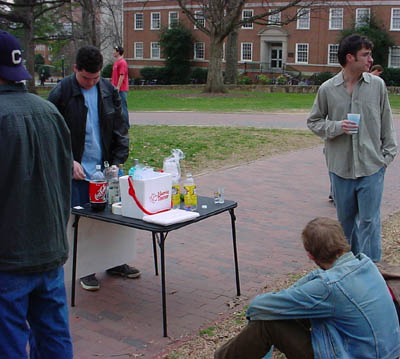 Tri-Oms chill out while a student makes a drink.
Agent White played the role of the suite mates RA (Resident Advisor) who was also a member of the frat.

Agent Todd: Our RA doesn’t give a fuck what we do. He buys us the beer for our parties. That’s him right there.
Agent White: nods silently and smiles.
Student: That is so cool. 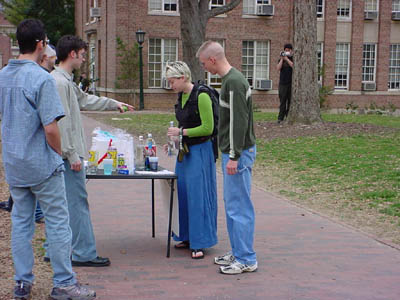 Agent Keech films from a distance
The mission was filmed discreetly by Agent Keech. One student noticed the camera and worried that he was going to be caught on film drinking liquor in public, “Dude, that camera is starting to sketch me out.” 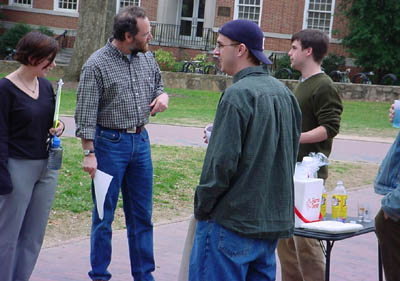 “This is legal?”
A UNC professor debated the legality of the issue claiming that the Tri-Oms were violating “open container” laws. Agent Todd responded, “Yeah, I see your point. But it’s not like we’re doing this out on the street. We’re on a private campus.” The professor declined the offer of a free mixed drink claiming, “I’m working right now.” 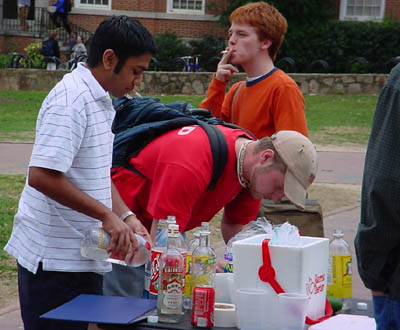 Students casually mix drinks
Almost no students questioned the legitimacy of the alcohol. Many were probably inexperienced drinkers who didn’t know the difference between a Vodka Tonic and a Water Tonic. Some might have caught on but elected to play along and silently observe others get fooled. No one verbally accused the Tri-Oms of not giving out real alcohol. 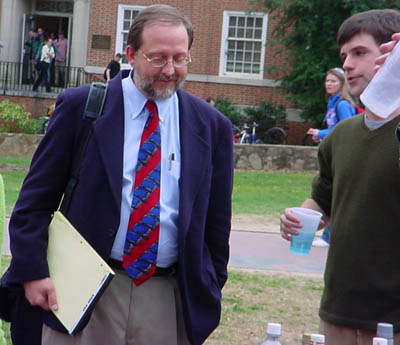 UNC Professor: “This is for real?” 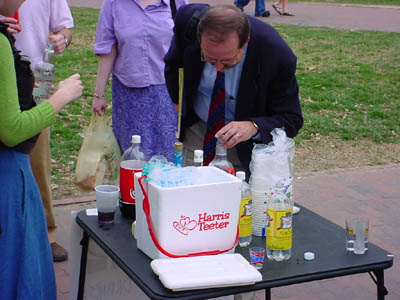 UNC Professor smells the “liquor”
Even after smelling a bottle of rum, the UNC professor pictured above never doubted the Tri-Oms. A little annoyed at their overt irreverence to the law, he simply smiled, “Good luck,” and walked away. 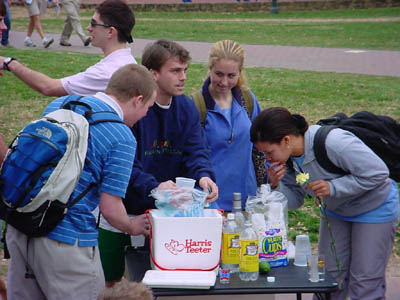 More students mix drinks
The Tri-Oms started doing vodka shots at 3 PM as a rush of students entered the quad as classes changed. The Tri-Oms began to shout, “It’s Friday afternoon and time to party!! Wooo! If you need a mixed drink, this is your table!” Pretty soon, crowds began to form and students had to line up to make their drinks. Once a large number of students began drinking, the doubts and legality worries were thrown out the window. Students simply enjoyed their free drinks while they laughed and socialized together. 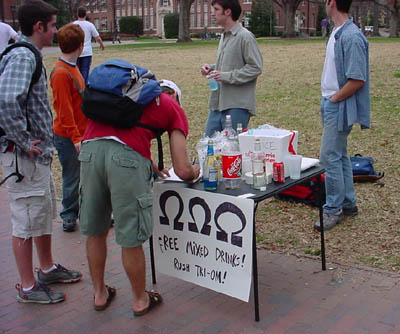 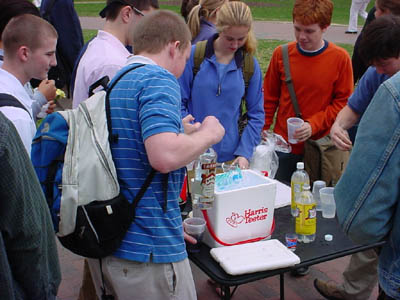 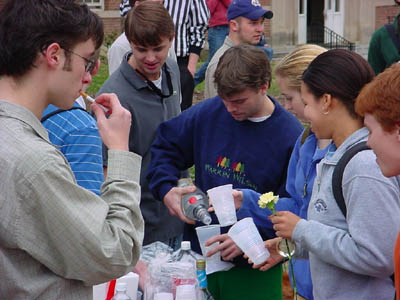 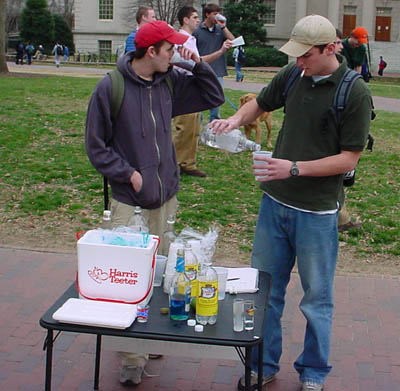 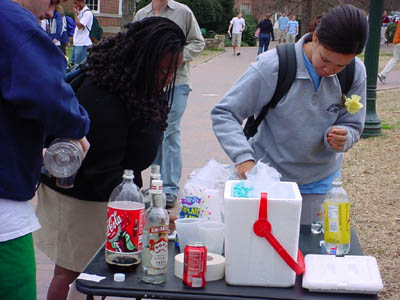 All in all it was a fun afternoon on the beautiful UNC campus. The mission’s goal wasn’t necessarily to fool (although many were certainly fooled), but to create something out of the ordinary. Although the Tri-Oms gave out countless free mixed drinks, it’s interesting to note how many students walked by the table without stopping to investigate. It’s astounding what it takes to divert some folks from their daily routine. We did our best.

Someone there that day sent us email. Read it here.