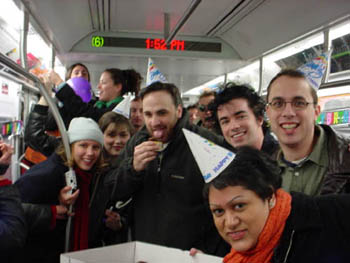 The 6 Train. 1:52pm
“We Cause Scenes.” It’s on the front page of our web site; it’s on our business card–it’s what we do. We go on “missions” and add them to our lists of “conquests”. But let’s get one thing straight, we can cause a scene without pissing anyone off. Missions and conquests can be executed without inciting anger or being deceptive. Usually, it’s more fun that way.

During the cold winter months, the New York subway system has been the primary stage for Improv Everywhere. Obviously it helps that it’s climate-controlled and there is always a captive audience, but there are even better reasons for staging missions on mass transit. The New York subway system is a daily symbol of the nine to five job, the corporate rut, and the agonizing commute. People of all different ages, races, and backgrounds board the subway system and sit alone. They read, sleep, listen to music, stare at the wall–anything to avoid engaging others on the train. It’s always the same: the same train, the same stops, the same delays, the same routine.

With our Subway Series, Improv Everywhere attempts to shatter the mundane and bring excitement and happiness to the underground. To us, the subway is a place where long lost brothers can meet, men can exchange outfits, and pants can be sold for $1. 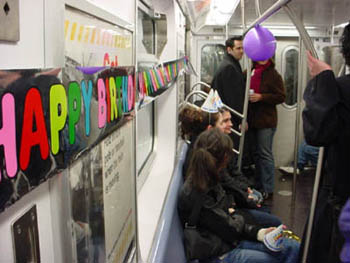 12 ft. Decorative Banner
With the goal of creating total fun, on February 2nd Improv Everywhere agents threw two surprise birthday parties on the 6 train. They came prepared with two 12-foot “Happy Birthday” banners, 24 party hats, 20 “Happy Birthday” balloons, 16 noisemakers, 35 cupcakes, and a “pin the tail on the donkey” game. As they did in “No Pants!“, IE Agents boarded the 6 train at Brooklyn Bridge. For the first party, agents White, Lovejoy, and Todd were throwing the birthday party for their friend Agent Good. Agent Rainswept, another friend of the birthday boy, was in charge of filming the party. The remaining 7 IE Agents played strangers who did not know anyone else. They entered the train at various stops before the party (exiting an adjacent car and entering the party car when the train stopped). 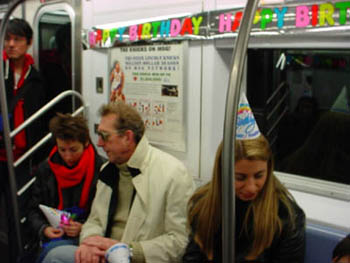 Not IE Agents. Strangers.
As soon as they entered the train at Brooklyn Bridge, White, Lovejoy, and Todd (“The Party-throwers” from here on out) began decorating the car for the party. They casually mentioned what they were doing to those who asked. “We’re throwing a surprise party. Our friend is boarding the train in a few stops.” They began to solicit help from strangers to blow up balloons and tape them to the walls. As the IE Agent “strangers” agreed to help, real strangers began to help as well. 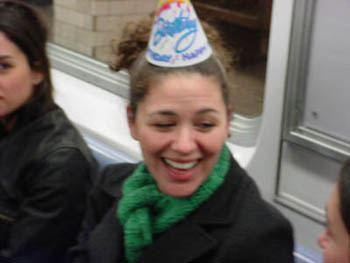 A stranger laughs.
The Party-throwers began to raise their voices and explain to train what was about to happen, “Hey everyone! We’re throwing a surprise party and we need your help!” They passed out party hats and noisemakers, and the strangers (both real and planted) eagerly got ready for the party. “Our friend’s name is Jesse! He’s going to enter from that car over there at the Astor Place stop. One of our friends is with him to make sure he gets on this car.” The Party-throwers had the undivided attention of everyone in the smile-filled car. 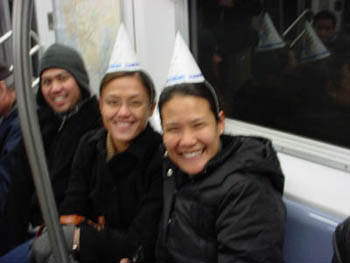 Happy stranger
As the train began to near the Astor Place stop, Agent Todd yelled out the final instructions, “I’ll give everyone the signal when he enters the car! We’ll yell surprise, and then as soon as the doors close, we’ll all sing Happy Birthday together! Remember his name is Jesse! Okay, here’s Astor Place. Shhhh! Shhhhh!” Agent Todd quited the entire train and the passengers sat in silent, giddy anticipation of Agent (Jesse) Good. At the stop agent Good and Minton (playing the role of Agent Good’s friend) exited the adjacent car, walked down the platform, and entered the party car. 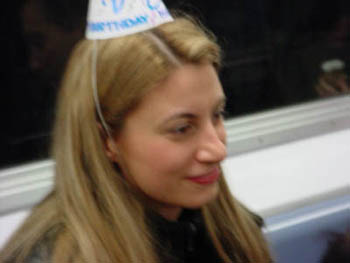 A stranger smiles.
“Surprise!” In unison, the train full of strangers shouted out with smiles and laughs. Agent Good stood flabbergasted. Agent Todd counted down, “1, 2, 3, Everyone! Happy Birthday to you…”, and the entire train sang Happy Birthday to dear Jesse. Everyone clapped and blew their noisemakers with joy. Agent White shouted, “Who wants cupcakes!?,” and began to distribute the food to all the hungry passengers. Agent Lovejoy set up the “pin the tail on the donkey game” and a few undercover IE “strangers” began to play, as others looked on with glee. The party throwers began to shout for Agent Good to make a speech, and Jesse delivered a heart-felt thank you to everyone on the train for coming to his party. 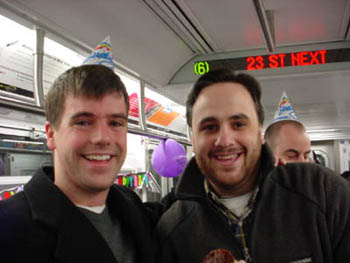 Agent Todd poses with the “birthday boy”, Agent Good.
On the return trip, the agents threw another surprise party, this time with Agent Richardson as the birthday boy. The results were the same. In a matter of minutes, the train went from quiet and dull, to loud and festive. For both parties, IE Agents had the participation of the entire train. People of all different ages and races joined together in the name of fun. Everyone from the three-year-old Chinese girl and her father to the 60-year-old tourist couple from Holland donned party hats, blew up balloons, and ate cupcakes together. We created a multicultural party for strangers of all ages, and damn was it fun. We refer to those we don’t know in this report as “strangers”, but as these parties prove, there really are no strangers in this world, only potential friends. Sappy? Yeah. True? Absolutely. 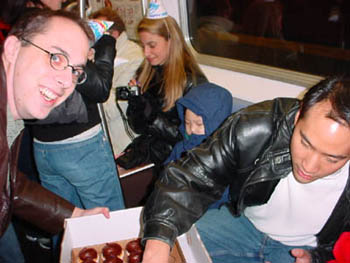 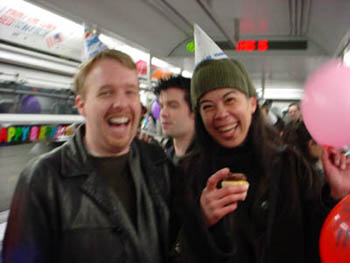 Agent Kinney poses with a stranger 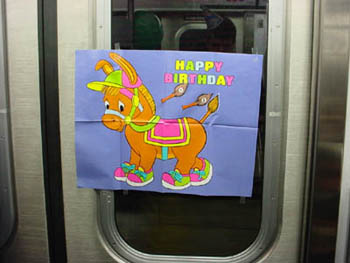 Pin the Tail on the Donkey! 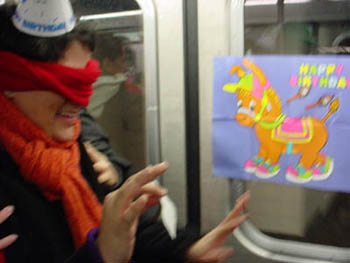 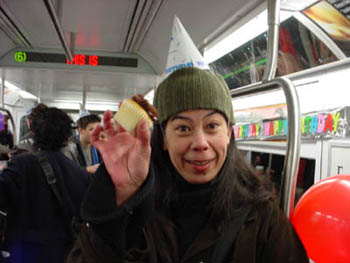 Excited about her cupcake
Mission accomplished.