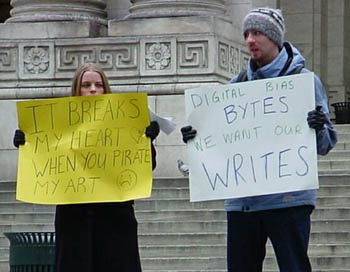 Over a pint of beer, agents Kinney and Todd started brainstorming ideas for an IE mission centered around a fake protest. What would be the most absurd place to picket? What is the one place that no one in their right mind would oppose? The answer was clear: the public library.

A fake organization was born, Writers Against Piracy (WAP). The members of WAP would be published authors who were fed up with their intellectual property being “loaned” out for free in the public library system. A slogan was created, “Libraries = Napster for Books”. WAP would do for books what Metallica did for music. Utilizing Agent Sung’s brilliant graphic design, Todd created a website for the group (which can be viewed here), and he and Agent Kinney prepared for the protest.

Nine Improv Everywhere agents met at high noon in Bryant Park (located behind the main branch of the New York Public Library). It was freezing cold, and the forecast was for snow, but dedicated agents were ready to cause a scene at all costs. The mission was simple: never break character. The agents posed as members of the New York chapter of WAP. They were all published writers who truly believed that the library was stealing their royalties.. Their objective was not to instigate conflict with those passing by the library, but to attempt to convert them. 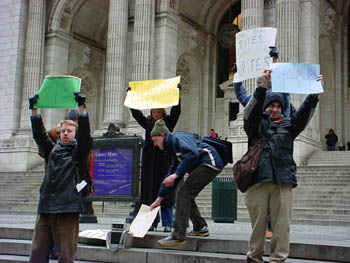 The protest begins
The agents armed themselves with posterboard signs boasting WAP propaganda. Agent Todd brought a mini-amplifier and microphone that the group used for inspirational speeches. Agents Dickerson and Shpuntov positioned themselves on the street and handed out over 300 WAP bookmarks that promoted the organizations philosophy and listed its website. 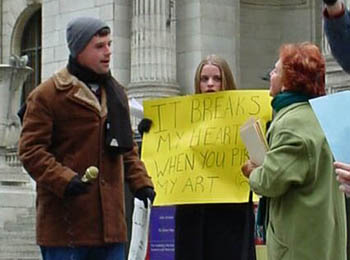 An open dialog
Astoundingly, a large percentage of those the agents talked with were swayed by the cause. Many conversations ended with, “I see your point, good luck.” The scene prompted a certain amount of laughter, but the laughter was always at the group rather than with the group (i.e. “I can’t believe these people are this crazy!” rather than “I can’t believe these people are pretending to be this crazy!”). 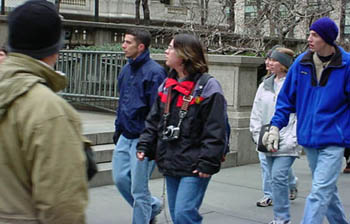 Audience Members
Not all who passed by the protest reacted with support or laughter, there were a few who were visibly angered by the sight. One man positioned himself in front of the video camera (the mission was openly filmed under the guise of it being a documentary in the making), crumpled up a WAP bookmark, and yelled, “You’re f*cked”. Another woman yelled to the members, “You can’t tell me you didn’t use a library when you were students!!”, and stormed away in a rage. 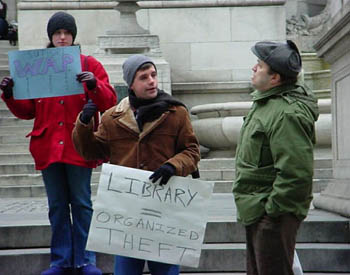 Agent Todd pleads his case while Villanti looks on
The agents dealt with the upset audience members by rigidly remaining in character and sticking to their objective. Rather than trying to start an argument, the agents tried to create an “open dialog” to discuss the issue in a calm manner. Arguments are easy to achieve and boring to watch. 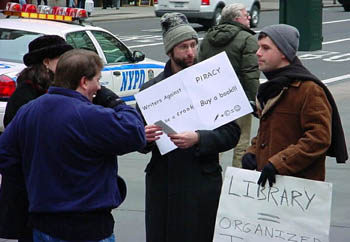 Shpuntov and Todd recruit
A police car arrived on the scene and a cop passed the group and went into the library. He left several minutes later, and never spoke to the group. It was a peaceful protest, and there was really no policing necessary. 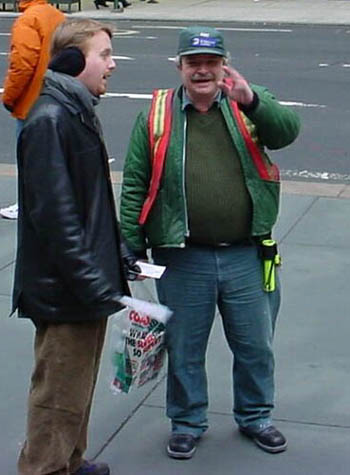 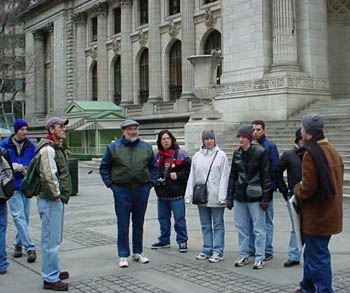