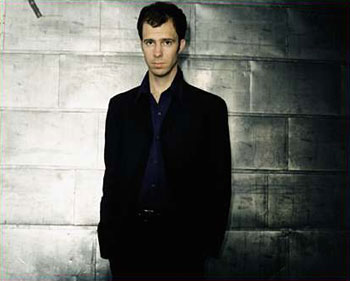 The next morning Brandon and I picked up our buddy Jon Karpinos at Grand Central Station. Karpinos, an improv veteran in his own right, was quite impressed with our Ben Folds antics from the night before and ready to get involved with the madness. After a long day of touring the city, we found ourselves in a nice bar in the West Village. The setup for the night’s improv would be the same as the night before, but the results were entirely up in the air.

I enter first and sit at the bar alone, strategically placing myself next two attractive girls. It is about 12:30 AM. I order a Budweiser (Ben is a real down-to-earth kind of guy). I sit alone for a good twenty minutes while Brandon and Jon, sitting at a nearby table, order food. The girls talk and pay me little attention. Enter Brandon.

Brandon: Are you Ben Folds? From Ben Folds Five?

Brandon: I can’t believe it! This is awesome! I’m a huge fan!!

Brandon: This is so awesome! Man! Hey Jon! Come over here, it’s Ben Folds! He likes your music too.

Brandon: This is Ben Folds!

Jon: Wow. This is so crazy!

Brandon and Jon gush over Ben. The three talk about his upcoming album, his old albums, and what it’s like to be famous.

Ben: Yeah no problem. I don’t have I pen.

Brandon: I’ve got one right here. Do you have anything to write with.

Ben signs autographs for Brandon and Jon. They return to their seat.

As if on cue, the girls immediately turn.

Girl 2: I was in L.A. last week with my bother, who is a really big fan of you by the way, and we thought we saw you walking down the street. Was that you?

Ben: Nope. I was in Chapel Hill.

Girl 2: He said it was you. I didn’t know, because I didn’t really know what you looked like. I’m Kristen, by the way.

The girls talk with Ben uninterrupted for about thirty minutes. Ben tells them that he has a group of friends working on a play for the Fringe Festival. They’re in rehearsal and he’s waiting for them to get out. Kristen and Hillary are in town on business from L.A. They’re both in their mid to late 20s, attractive, and sophisticated. Ben talks about fame, his friend William Shatner, what it’s like to be on Conan O’Brien, etc. The girls talk about their work, their weekend in New York, and what it’s like out in L.A. The girls tell Ben how amazing it is that he’s so friendly.

Brandon: Hey Ben, let me buy you a drink.

Ben: No thanks. Don’t worry about it.

Brandon: Ok. How about you buy me a drink?

Kristen: You don’t have to do that.

Brandon: Come on! Buy me a drink.

Brandon: I buy your albums, you buy me a drink! That’s the way it works!

Hillary: (disgusted with Brandon) Why don’t you buy us a drink?

Ben: Yeah! You buy these two girls a drink and then I’ll buy you a drink.

All four order pints from the bartender and argue over who is going to pay for them.

Ben: Don’t worry about it. I’ll just pay for all of them.

Kristen: No! We’re paying for them. Put your wallet away.

Brandon: No, let me pay.

Brandon pays for all four drinks and returns to his table.

Kristen: That guy is such an asshole.

Ben, Kristen, and Hillary talk for another thirty minutes as they drink their fresh pints. Before Ben can order another, his cell phone rings. He takes the call and returns to the bar.

Ben: My friends are out of rehearsal. I’m meeting them at another bar. It was great talking to y’all.

Kristen: It was so nice to meet you! My brother is going to flip when he hears about this.

Hillary: Good luck with the new album and everything.

Ben: Thanks. Y’all enjoy your weekend in New York.

Kristen: We will. Have a good night.

Ben leaves the bar. It is 2 AM. Brandon and Jon stay at their table. Ten minutes pass. Ben returns. After talking with the bouncer and both bartenders, Ben approaches Kristen and Hillary.

Ben: Hey. Have you guys seen a wallet?

Kristen: No, you can’t find yours?

Ben: I was in another bar with my friends and when I tried to pay for my drink I couldn’t find it.

Ben: You saw me with my wallet here, right?

Hillary: Yes, you paid for your drinks here.

Ben: Right. The last time I had it was sitting right here with you.

Kristen: Yes. You had it out when that guy was trying to buy us drinks. Oh my god. You should go see if that guy has it.

Ben: You don’t think he has it?

Ben: He was kind of an asshole, but he won’t take my wallet, right?

Ben: What do I say? I don’t want to just accuse a fan of stealing.

Hillary: Just ask him if he’s seen it. Go ask him.

Ben walks over to the table.

Ben: Excuse me, I can’t find my wallet. Is there a chance that our wallets got–

Most of the bar hears this. The girls get up and walk over. The bouncer stands by the door.

Ben: I’m not saying you stole it, I’m just wondering if we got our wallets mixed up.

Brandon: You can’t fucking accuse me of anything! I didn’t steal anything!

Ben: (pointing to cell phone) If you don’t lower your voice and calm down I am going to call the cops.

Brandon: You can’t call the cops. I didn’t steal anything!

Ben: Just take out your wallet. Let’s look at it.

Brandon: Fuck you! I’m not doing anything.

Ben: (to Jon) It’s obvious your brother is too drunk to talk. Come here.

Ben takes Jon to a corner of the bar to talk about the situation.

Charlie: Jon, I’m going to slowly hand you my wallet. Put it in Brandon’s bag.

In the meantime, Kristen and Hillary are engaged in a verbal fight with Brandon.

Kristen: (shouting) I don’t know if you believe in karma, but you need to do the right thing here!

Brandon: I didn’t do anything.

Hillary: Just empty your pockets and prove it.

Kristen: Ben does not deserve this! He was so nice to you!

Ben returns and sees Brandon shouting. He pushes the girls out of the way.

Ben: (firm, loud) You will NOT talk to them that way. These girls do not deserve that.

Brandon: I can say whatever I want to say.

Kristen: Just take out your wallet!

Jon takes Brandon’s book-bag and puts it on the table. He reaches in and produces a black wallet. Ben grabs the wallet. The girls scream.

Kristen: I can’t believe it! I cannot believe he actually stole it!

Ben slowly walks out of the bar. The girls follow him.

Kristen: Are you ok?

Kristen: I know how you feel. I had my wallet stolen in the San Francisco Airports once…

Hillary and Kristen put their arms around Ben and attempt to calm him down. The bartender walks out.

Bartender: Is everything ok out here?

Kristen: Yes. He’s fine. He got it back.

Bartender: Man, I’m sorry you had to go through that.

Ben: It’s ok. These kinds of things happen to me every now and then.

Bartender: Well, if the three of you want to stay and have another drink, it’s on the house.

Kristen: Thank you. That’s so nice of you. Ben, can you stay for a drink?

Ben: I’ll have to call my friends.

Kristen: I think you need to stay. Come in, have a drink, and we’ll put everything to rest on a good note.

Ben calls his `friends’ on his cell phone and lets them know he found the wallet and that he’ll be at the bar for a bit longer. The three return to the bar and order their free pint.

Kristen: As soon as you said you were missing your wallet, I thought of that guy.

Hillary: Me too! I didn’t want to say it, but I knew he could have taken it.

Ben: I guess I try trust fans too much sometimes.

Kristen: You’re sweet. There’s nothing wrong with that. That guy was just a total douche-bag.

Kristen: I mean, forgive my language, but it’s the only way I can phrase it. The guy was a douche-bag.

Hillary: Yeah, we knew it from the moment he came up here and tried to buy us drinks.

Hillary: Yeah, that kind of guy thinks he can hit on you as much as he wants if he buys you a drink.

Both bartenders and the bouncer have been talking about the situation and pointing to Brandon, who is still seated at the table with Jon. The bouncer approaches them.

Bouncer: You guys got to go.

Brandon and Jon leave the bar as the bouncer shows them the door. Hillary focuses her attention on flirting with the bartender while Kristen flirts with Ben. The two talk privately together for another fifteen minutes. Around 3:30 AM, three hours after he entered the bar, Ben’s cell phone rings. He takes the call away from the bar and then returns.

Ben: My friends are leaving the other bar. I’m going to have to go and catch up with them.

Kristen: Oh. This has been so crazy.

Ben: Yeah. It really has.

Ben and Kristen lock eyes. There is an awkward pause.

Kristen: I… I don’t know what we do here. Do we exchange phone numbers?… Would you…

Ben: Yeah…. Well… Why don’t you give me your number in L.A. and I’ll call you when I’m out there on tour this fall.

Kristen: Yes. That would be great.

Kristen writes down her phone number on a napkin and hands it to Ben.

Kristen: It has been so wonderful meeting you.

Ben: Thanks for helping me with the wallet. It was really great of you.

Kristen: Of course. I’m sorry you had to deal with that.

Kristen: Good luck with the new album and everything.

Ben: Thanks. Thanks again for helping me. It’s been great talking with you.

Kristen: Yeah. It has.

Ben tells Kristen and Hillary goodbye, thanks the bartender for the drink, and leaves the bar.

You can also read Agent Karpinos’ Report of the evening.

EPILOGUE:
Exactly five years after this mission to the day, I attempted to call Kristen: